If this past month was a reliable indicator, my family should be shopping for discernment at Costco. Difficult decisions multiplied, and there was no blinking “Thou shalt” or “Thou shalt not” to light the way.

Old family friends, desperate to save their sinking business, asked to borrow a large sum of money. Did we lend it? Our eldest, entering her senior year of high school, talked of pursuing a music degree after graduation. Given the career prospects, did we advise against it? A group of volunteers at church, despite voicing enthusiasm for a certain project, continued to miss important deadlines. Did we indulge their lapses? Someone we’d hired for a house project (and with whom we’ve had multiple opportunities to share our faith) charged double his initial quote. Did we swallow our disagreement and pay?

Ambiguity faced us at every turn.

Not every moment for discernment was so consequential and grave. (We were also weighing the pros and cons of getting a puppy, which we delightfully did. Her name is Via.) Some decisions even represented generous, open-ended gifts of possibility: invitations to participate in interesting work projects, to join worthy volunteer causes, to help our children explore their unique passions, to invest in cherished friendships.

In her thoughtful new book, All That’s Good: Recovering the Lost Art of Discernment, Hannah Anderson (a writer and frequent TGC contributor who lives in the Blue Ridge Mountains of Virginia) explores the nature of discernment, arguing that it’s a wisdom offered by God beyond listicles, self-help principles, and even alliterated sermon points. “I won’t offer you three easy steps to making good decisions,” Anderson writes, “or rigid boundaries to keep you on the straight and narrow. In fact, I’ll do my best to complicate your decision-making process, to lead you away from our common disposition to fear-based thinking toward a place of hope and abundance.” 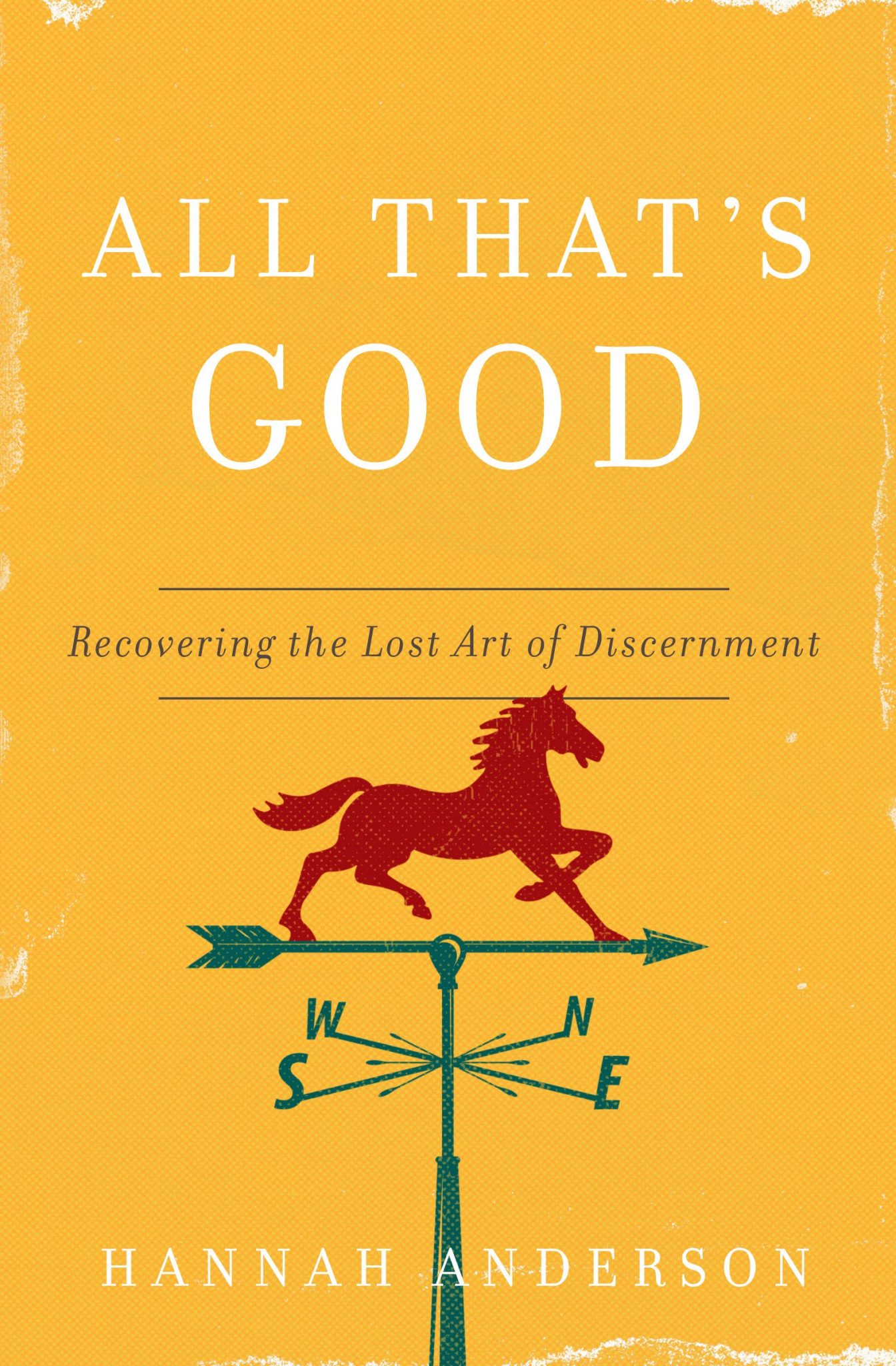 All That's Good: Recovering the Lost Art of Discernment

All That's Good: Recovering the Lost Art of Discernment

Looking out over the world today, it seems a far cry from God’s original declaration. Pain, conflict, and uncertainty dominate the headlines. Our daily lives are noisy and chaotic—filled with too much information and too little wisdom. No wonder we often find it easier to retreat into safe spaces, hunker down in likeminded tribes, and just do our best to survive life.

But what if God wants you to do more than simply survive? What if he wants you to thrive in this world, and be part of its redemption? What if you could rediscover the beauty and goodness God established in the beginning?

Some might entertain such a prospect nervously: Just tell me what to think, what to do! But most of us recognize that while we serve a God generous in giving discernment, he doesn’t apportion it in the form of the frozen dinner, made for mindless eating. Instead, he endows us with his own “taste for what’s good,” with his own “refined sensibility.” Discernment, according to Anderson, is less about the menu—and more about the palate.

Discernment is less about the menu—and more about the palate.

As a younger Christian, though, I was a lot more preoccupied with the menu. What foods were allowed? What foods weren’t? Truthfully, this moral hyper-vigilance wasn’t only the stuff of my adolescent imagining. I was told, after a summer camp conversion at 16, that the only way to preserve my commitment to Christ was to maintain strict adherence to several rules: I must read my Bible every day for 10 minutes; pray every day for five; witness to one person each week; refuse drugs and alcohol; and wait to have sex until marriage.

It was a consoling idea at the time, that the rules could keep me safe. And while I have no doubt that the rules were well-intentioned, even that the rules were beneficial (who can argue with forming the habit of Bible reading at 16?), they didn’t help me understand the larger points Anderson makes in her book. First, that the world isn’t always easily divided into neat halves of right and wrong; second, that God wants to make us into discerning people more than he wants to give us the functional capacity of discernment.

Rules can prescribe the right behavior, but they can’t form the right character. Discernment is a function of the latter.

I suspect there’s a devilish efficiency we’re tempted by in any kind of leadership we exercise, whether in our homes, workplaces, or churches, and it tempts us to ignore the more wise, winding route of discernment. Rules are easy to make, easy to impose. I’ve been in organizations and churches that take this posture. It’s assumed that leaders are meant to make decisions, everyone else meant to (slavishly) follow them. I’m not suggesting, of course, that pastors shouldn’t exercise the right and responsibility for guiding their flocks, only that discernment is formed less by leadership of the “bit and bridle” kind (Psalm 32).

Rules can prescribe the right behavior, but they can’t form the right character. Discernment is a function of the latter.

As Anderson reminds us, God’s own instruction comes to us in the form of “test cases and story problems and examples of what it might look like to apply discernment, helping move from the theoretical to the practical.” Just as there is an art to discernment, there’s something artful about godly leadership as it knows when to instruct and guide, when to encourage and cheer, when to stay silent and pray.

There’s simply no way for our children, colleagues, and congregants to form discernment by proxy. As we’re reminded in the book of Hebrews, the goal of Christian discipleship is to make teachers of us all, capable of nourishing ourselves on “solid food . . . for the mature, for those who have their powers of discernment trained by constant practice to distinguish good from evil” (5:14).

Discernment isn’t meant to be the reserve of the few, but the purview of the many.

In Search of Pearls

In kind, Anderson’s book doesn’t hand down imperatives from on high, doesn’t merely seek the avoidance of evil, but rather cultivates a taste for the good. In form, it mirrors the search for the true, the honorable, the just, the pure, the lovely, the commendable. Like the women in Japanese coastal villages who dive deep into the ocean in search of pearls, there’s a lot of treasure below the surface of these pages.

If you read All That’s Good hoping for a quick answer to a complex problem, you aren’t likely to find it. It won’t tell you whether to lend money to your friends, what college degree your child should pursue, or what tack to take with unreliable volunteers and dishonest tradespeople. But if, with knife and basket, you go in search of a pearl, you won’t come up empty-handed.

“Neither man nor woman can resist the loveliness of a pearl.”