Almost two centuries ago Alexis de Tocqueville concluded that the taproot of the country’s freedom was Americans’ “habits of the heart.” Today, journalist Kirsten Powers fears that root is at risk:

The illiberal left is eradicating these “habits of the heart” so Americans won’t even remember what it was like to be able to speak freely without fear of retaliation from a silencing mob or a few disgruntled lefties.

Powers thoroughly documents this thesis in her new book, The Silencing: How the Left Is Killing Free Speech. Like the phenomenon it describes, The Silencing spotlights a barrage of incidents in which intolerant liberals have demonized, censored, and sought to marginalize those who dare dissent from their “settled” orthodoxy. Powers catalogs cases of students’ free speech shut down for opposing abortion or same-sex marriage, academics silenced for urging debate in such instances, individuals pressed from employment or off prominent platforms for their beliefs, and journalists stonewalled for asking the “wrong” questions or reaching “incorrect” conclusions.

Rather than welcoming discussion of opposing viewpoints, illiberal liberals resort to attacking the character of opponents, often impugning dissent as racist, misogynist, and homophobic. The result is a toxic environment for liberty.

This topic is significant, and the source makes it more so: Powers is herself a liberal. As she sees it, true liberalism ought to value ideological diversity and welcome debate—a perspective she learned growing up in a progressive household amid a conservative Alaskan community. After moving to New York City as an adult, however, she encountered a different kind of illiberal liberalism: an insular kind that was dismissive of competing viewpoints. Conservatives were a rarity. “That unfamiliarity bred contempt,” she observes.

Powers admits adopting that outlook for a time as she worked in Democratic politics on the East Coast. But then “two experiences unexpectedly put me in a regular relationship with conservatives: working as a contributor at Fox News and a later-in-life conversion to Christianity.” These contacts exposed a discrepancy between stereotype and reality. 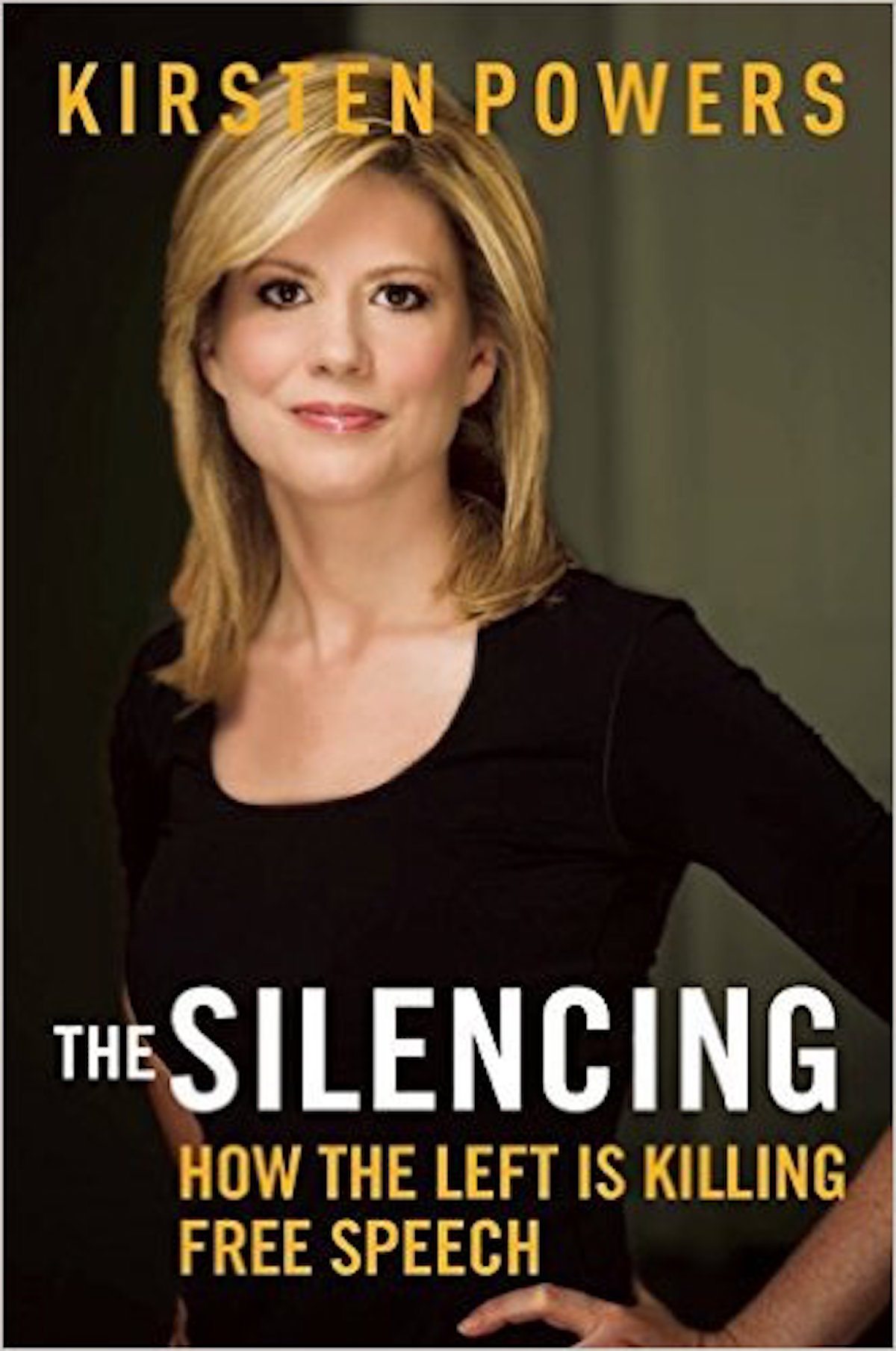 The Silencing: How the Left is Killing Free Speech

The Silencing: How the Left is Killing Free Speech

The divergence between the popular images and realities of the two camps—Christians and conservatives more reasonable than their caricatures, liberals less open-minded than their reputation—is fodder for her portrait of illiberal liberalism.

Much of the silencing occurs through social pressure, technically avoiding restriction of free speech. Yet especially on college campuses, the use of official actions like speech codes, “free speech zones,” and investigations have a seriously chilling effect. Powers cites the research of the Foundation for Individual Rights in Education (FIRE), which surveyed 400 institutions of higher education and found more than half had extremely restrictive policies on student speech.

Christian groups have faced increasing challenges on a number of campuses. Like many other groups, Christian student organizations typically require leaders to uphold its core beliefs. InterVarsity, for example, requires leaders to sign a statement of faith while welcoming all students to participate (indeed, 25 percent of participants aren’t Christians).

When the California State University (CSU) system decided to require student groups to adopt a policy opening membership and leadership to all students, InterVarsity had to choose between its beliefs and university policy. The Christian group stood by its convictions and, as a result, lost recognition in the 23-campus Cal State system during the 2014–2015 school year. In June 2015, CSU and InterVarsity reached an agreement that will allow the group back on CSU campuses.

But InterVarsity’s press release announcing the breakthrough noted that the group still faces challenges elsewhere in California and several other states. Similar incidents have driven Christian groups off campus at Vanderbilt University and Bowdoin College.

Conservatives and Christians are frequently the targets of the intolerant left, but, as Powers documents, it doesn’t stop there. Illiberals also lash out at moderates or even liberals who don’t toe the politically correct line. Such was the experience of journalist Campbell Brown, who pursued education reform to the consternation of the teacher unions, and of Atlantic and Slate commentator Hanna Rosin, whose book The End of Men [review] was perceived by some feminists as undercutting their claims about the plight of women.

“Illiberal feminists are perhaps the most ferocious warriors among the illiberal left,” Powers observes. “They deny conservative men the right to speak on any issue that affects women, and they are utterly intolerant of any dissenting women, even disallowing them their right to state their own opinions in their own words.”

Silencing debate on important issues is detrimental to public discourse, and forcing religious ministries to conform to the new orthodoxy on marriage undermines promising solutions to social problems, Powers argues. She cites the example of Bethany Christian Services, the country’s largest adoption agency, which works in 36 states to place children in a permanent home with a mother and a father. When same-sex couples seek adoption through Bethany, the group refers them to another agency.

But Massachusetts, Illinois, and Washington, D.C., have insisted that religious child welfare agencies abandon such convictions, forcing out Roman Catholic and evangelical child welfare providers. If that trend continues, groups like Bethany will be marginalized. That would be a serious loss both to the children served by such religious groups and to the community at large.

The publication of The Silencing is timely since the threats it chronicles will only increase in the wake of the Supreme Court’s decision to mandate same-sex marriage nationwide. Just a few weeks before the book’s mid-May release, the U.S. Solicitor General had told the Court that, if marriage were redefined, religious schools could face issues over their non-profit tax status for maintaining a biblical view of marriage.

Religious individuals and organizations are rightly concerned about the implications of the decision. Protections such as the federal First Amendment Defense Act and the Child Welfare Provider Inclusion Act—as well as similar proposals at the state level—are critical now that the Court has imposed same-sex marriage on all 50 states. Policies like these will determine whether those who believe marriage is the union of one man and one woman are free to continue operating in good faith or are marginalized as extremists.

“I am a longtime vocal supporter of same-sex marriage,” Powers writes. “But in my experience, most people who don’t share my opinion—which included, until recently, scores of Democrats—are not bigots but people with sincere and respectable beliefs. . . . [A]uthoritarian demands for intellectual conformity and the relentless demonizing of people who don’t support same-sex marriage are inherently illiberal and wrong.”

Powers’s closing admonition is succinct, though not simple: “Now, go make some unlikely friends.” The prescription is a good formula for greater tolerance in society. It’s much easier to demonize those you don’t know.

That’s not the only lesson to take away from The Silencing, however. It contains a number of implications for our public discourse, such as:

The Silencing is a welcome call to revive debate and sustain civil discourse. A free society requires such exchange, and we cannot navigate the challenges ahead without it.

Jennifer A. Marshall is vice president for the Institute for Family, Community, and Opportunity at The Heritage Foundation and senior research fellow at the Institute of Theology and Public Life at Reformed Theological Seminary in Washington, D.C. She is the the author of Now and Not Yet: Making Sense of Single Life in the 21st Century. You can follow her on Twitter.