Charles Lee Irons, under the supervision of Donald Hagner at Fuller Theological Seminary, has written a dissertation that should have a far-reaching effect. He challenges the common view—one received as settled orthodoxy in many circles—that the righteousness of God should be defined as covenant faithfulness. I think his case is convincing, so I will concentrate on summarizing his argument.

He begins by showing the pervasiveness of the “covenant faithfulness” reading in contemporary scholarship. It’s advanced by scholars like J. D. G. Dunn, N. T. Wright, and Richard Hays. But the view isn’t limited to those who advance the New Perspective on Paul; it’s also endorsed by prominent and influential figures in biblical scholarship such as Adolf Schlatter, Walther Eichrodt, Gerhard von Rad, Ernst Käsemann, Peter Stuhlmacher, Karl Kertelge, Ulrich Wilckens, Elizabeth Achtemeier, Michael Bird, and so on. Historically, the view reaches back to Albrecht Ritschl, and especially Hermann Cremer, who posited a Hebrew relational theory to explain the meaning of righteousness.

The consensus that righteousness refers to a righteous status was shattered by the work of Albrecht Ritschl and Hermann Cremer. Cremer understood the phrase in covenantal terms—that is, as God’s saving activity and faithfulness to his covenant with Israel. 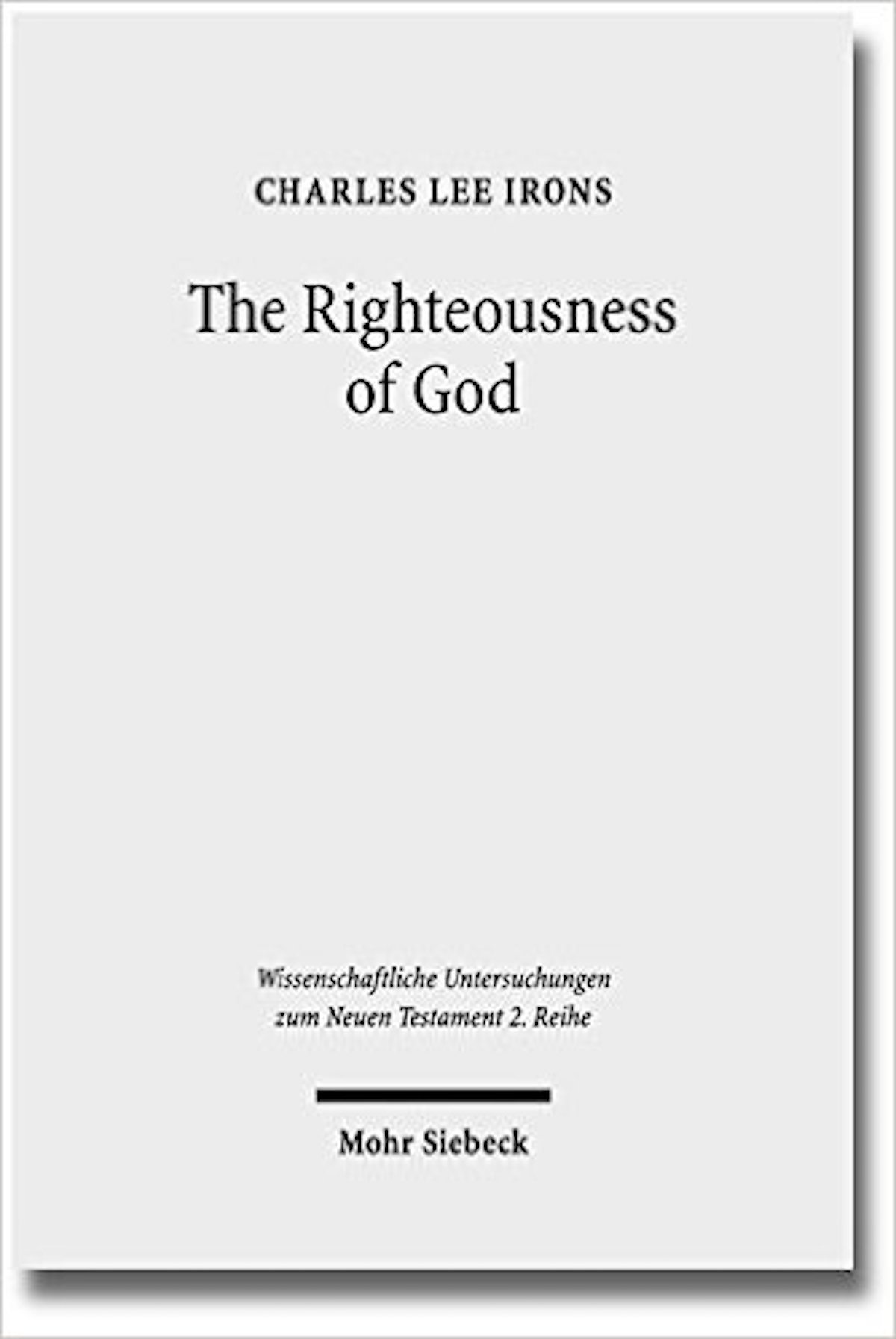 The Righteousness of God: A Lexical Examination of the Covenant-Faithfulness Interpretation

The Righteousness of God: A Lexical Examination of the Covenant-Faithfulness Interpretation

Chapter two considers method. Irons helpfully distinguishes between lexical concepts and discourse concepts, and between sense and reference. When it comes to the righteousness of God, some scholars mistakenly let other words in the near context bleed into its lexical meaning. Newer studies in Hebrew parallelism demonstrate that when words are parallel, the parallelism isn’t synonymous. For instance, God’s righteousness and faithfulness in the Psalms and Isaiah are closely related in meaning but aren’t identical. It’s a mistake, then, to conclude from the close association of these terms that righteousness is covenant faithfulness. Additionally, too many who defend the notion that righteousness means covenant faithfulness have operated from the refuted and discarded idea that there’s a distinction between Greek and Hebrew thought. The notion that words in the righteousness word group became a calque (loanword) in the Septuagint (LXX)—so that the Hebrew meaning of righteousness is distinct from the Greek meaning—remains unproven. Such a view fails to persuade, Irons says, since in documents written by Greek-speaking Jews during the second temple period the word doesn’t mean covenant faithfulness. The evidence for a calque isn’t supported, therefore, by the evidence.

Chapter three investigates “righteousness” in extrabiblical Greek, showing that the noun “righteousness” derives from the adjective “righteous.” The word is often used in judicial contexts and can be translated as “justice.” It also designates righteousness in the social realm, particularly relating to promises, oaths, contracts, covenants, and treaties. Righteousness is also defined as distributive justice in some philosophical discussions, so that righteousness occurs when people are recompensed according to what they’re due. Finally, it is often defined in terms of virtue. This chapter plays an important role, for if the meaning of the righteousness of God in the Old Testament (OT) and the New Testament (NT) doesn’t swerve from the use of the term in Greek thought, then the notions of rightness, justice, and norm are present. Further, the sharp distinction between Judaism and Hellenism has been repudiated in NT scholarship, especially by Martin Hengel. Hence the notion that “righteousness” has a dramatically different meaning in Greek thought can only be sustained if there’s clear contextual evidence.

Chapter four is probably the most important chapter in the book, since the covenant-faithfulness interpretation depends on the OT for its reading. Irons contends this popular interpretation doesn’t square with the evidence. Actually, in the Masoretic Text and the Septuagint “righteousness” should be understood judicially and in terms of a norm. Often the term is used in legal contexts where justice is to be enacted. It’s also often used ethically and has to do with behaving in a righteous or moral manner or of being counted as righteous before God. Irons carefully draws his conclusions working with semantic domain analysis to sustain his judgments.

He takes special aim at the covenant-faithfulness interpretation. First, he shows Cremer’s claim—that righteousness always has to do with salvation instead of judgment—is unconvincing. In the Psalms and Isaiah God’s righteousness is often parallel to salvation, but a right understanding of Hebrew parallelism noted above indicates that the words aren’t precisely synonymous. Irons distinguishes between the lexical concept of righteousness having to do with what’s right, and with the discourse concept present in the parallelism. In other words, God’s salvation of his people is also the right thing to do; he vindicates his people in saving them. In the discourse or broader context the notion of faithfulness to God’s covenant may be present, but it doesn’t follow that righteousness means covenant faithfulness. I think he’s exactly right here, and I’ve argued elsewhere that God’s righteousness fulfills God’s covenant promises but shouldn’t be defined as his covenant faithfulness. As Irons puts it, faithfulness to the covenant is a subset of righteousness. God vindicates his people by delivering them and by judging their enemies. Cremer’s claim that righteousness never denotes distributive justice or punishment is clearly mistaken, then, since there are many passages where God’s righteousness is given as the reason for his judgment (e.g., Exod. 9:27; 2 Chron. 12:1–6; Ezra 9:15; Neh. 9:32–33; Lam. 1:18, etc.).

Moreover, Irons demonstrates that the norm character of righteousness is evident in the OT. This idea is rejected by most, but he shows it can’t be dislodged so easily. A number of texts, for instance, describe the ethical righteousness (imperfect to be sure) of those who belong to God. The case of Tamar (Gen. 38:26) is often set forward to defend the covenant faithfulness view, since her actions are deemed to be righteous within the relationship between Judah and Tamar. Irons, however, rightly argues that either her actions were righteous (Judah declares she’s innocent in the matter) or she was more righteous than Judah. In either case, conformity to a norm is still in view.

‘Righteousness’ in Jewish Literature and Paul

Chapter five examines righteousness in Jewish literature. Irons considers the Dead Sea Scrolls, the Apocrypha, and OT Pseudepigrapha written in Hebrew; the Apocrypha and OT Pseudepigrapha written in Greek; writings by Josephus and Philo; and NT usage outside Paul. He carefully and painstakingly looks at the evidence, convincingly showing that God’s righteousness in the Dead Sea Scrolls is ethical, judicial, and used to designate correctness. We also see God’s “righteousness” used to designate his vindication of his people through punishing their enemies, like we saw in Psalms and Isaiah. Most often “righteousness” refers to ethical righteousness before God and is tied to obedience to the Mosaic law. A significant problem for the covenant-faithfulness view is that righteousness in terms of acting correctly or with integrity or in accord with one’s word, though rare in the Jewish literature written in Hebrew, is absent in Jewish literature composed in Greek. The linguistic connection advocated in the covenant-faithfulness interpretation is lacking in Jewish Greek literature, which amounts to a significant problem for such an interpretation. Finally, God’s righteousness in terms of his spiritual deliverance only occurs twice in Jewish literature composed in Greek, and hence doesn’t provide a clear platform for Pauline usage.

Space is lacking to interact with all the evidence presented, but Paul’s allusion to Psalms 143:2 in Romans 3:20–21 plays a significant role in the covenant-faithfulness interpretation. Such a view, however, is flawed. It mistakenly reads righteousness in the psalm in terms of covenant faithfulness when, as Irons shows in his chapter on righteousness in the OT, it actually denotes God’s rightness.

Irons also argues that in Paul the righteousness of God designates righteousness from God as a gift (genitive of source) instead of describing God’s delivering or saving work or his attribute of justice. I think he’s on target here, though it’s also possible that the righteousness that belongs to God is given to believers. Such an interpretation is fully compatible with Irons’s view. In any case, he shows that there are powerful and decisive reasons to say that God’s righteousness is a gift from him, denoting a status before him. He argues well for the notion that πίστις Χριστοῦ (pistis Christou) denotes faith in Christ instead of the faithfulness of Christ. He also picks up and expands my argument regarding the parallels between Philippians 3:9 and Romans 10:3, arguing that they constitute decisive evidence that righteousness is a gift of God in both texts. Once this is granted, it’s quite probable that God’s righteousness is God’s gift in Romans 1:17 and Romans 3:21–22 as well.

To sum up, the gauntlet has been thrown down. Those who defend the covenant-faithfulness view of God’s righteousness must reckon with and refute Irons. He has demonstrated that the gift character of God’s righteousness is the view of most interpreters throughout church history. He has also demonstrated, with remarkable care and wonderful clarity, that such is the meaning in Paul’s writing as well. When finishing a dissertation like this, I couldn’t help but think, this should’ve been written a long time ago. But it hasn’t been tackled until now.