The ongoing debate over gay marriage will enter uncharted territory later this year when the Supreme Court delivers its ruling on two cases. The Court’s decision is, of course, a matter of considerable speculation and uncertainty. Yet within the court of public opinion, things are somewhat clearer: those who want to legalize gay marriage have been effectively persuading pundits and voters that it is not merely just, but inevitable.

What Is Marriage? Man and Woman: A Defense attempts to stop the bleeding, as it were, and persuade the public (and Anthony Kennedy and the other members of the Supreme Court) that “conjugal marriage laws are indeed rationally grounded” (6). The book revises and updates an influential 2010 paper by this same name written by Sherif Girgis, PhD student in philosophy at Princeton University and JD candidate at Yale Law School; Ryan T. Anderson, fellow at the Heritage Foundation and online editor of Public Discourse; and Robert P. George, visiting professor at Harvard Law School and professor of jurisprudence at Princeton University. The argument is probably the most sophisticated natural law defense of marriage to date. Yet while rigorously argued, the book doesn’t require technical philosophical ability to be understood and appreciated. Even for evangelicals skeptical about the public effectiveness of natural law arguments, What Is Marriage? is worth grappling with as the best attempt to defend traditional answers without appealing to revelation.

Crucially, though, What Is Marriage? isn’t an argument about homosexuality, a point the authors make clear from the opening sentence. While that might strike many as counterintuitive (espcially those who tend to approach the conversation about marriage by prioritizing the question of whether homosexuality is right or not), it is a shrewd tactical decision. By sidestepping the question of homosexuality’s morality altogether, they undermine from the outset the counter that objections to gay marriage are simply rooted in animus or bigotry.

Yet it’s also an indication of just how much the public debate has shifted. That the authors work hard to separate the questions (as Maggie Gallagher also does in her part of the recently released Debating Same-Sex Marriage) indicates that the morality of homosexuality is only seriously contested within the church.

Girgis, Anderson, and George present two competing views of marriage, what they call the conjugal view and the revisionist view. The former is marked by “a bodily as well as an emotional and spiritual bond, distinguished thus by its comprehensiveness” (1). The latter, which is the view the no-fault divorce regime hinges on and, they contend, is being furthered by the gay marriage case, is, “in essence, a loving emotional bond, one distinguished by its intensity—a bond that needn’t point beyond the partners, in which fidelity is ultimately subject to one’s own desires” (1-2). The heart of their case against redefining marriage, the authors claim, is that many “will not see [marriage] as essentially comprehensive, or thus (among other things) ordered to procreation and family life—but as essentially an emotional union” (7).

Theirs isn’t simply a positive case for the necessity of the conjugal view for policy and culture, though it is primarily that. They also contend that the revisionist view cannot distinguish companionship from marriage such that the state should take an interest in it. While we might think it intuitive that the state recognize sexual relationships, the authors insist that the expressivist view cannot explain why. By expanding marriage, the expressivist view loses the ability to say what’s distinctive about it. 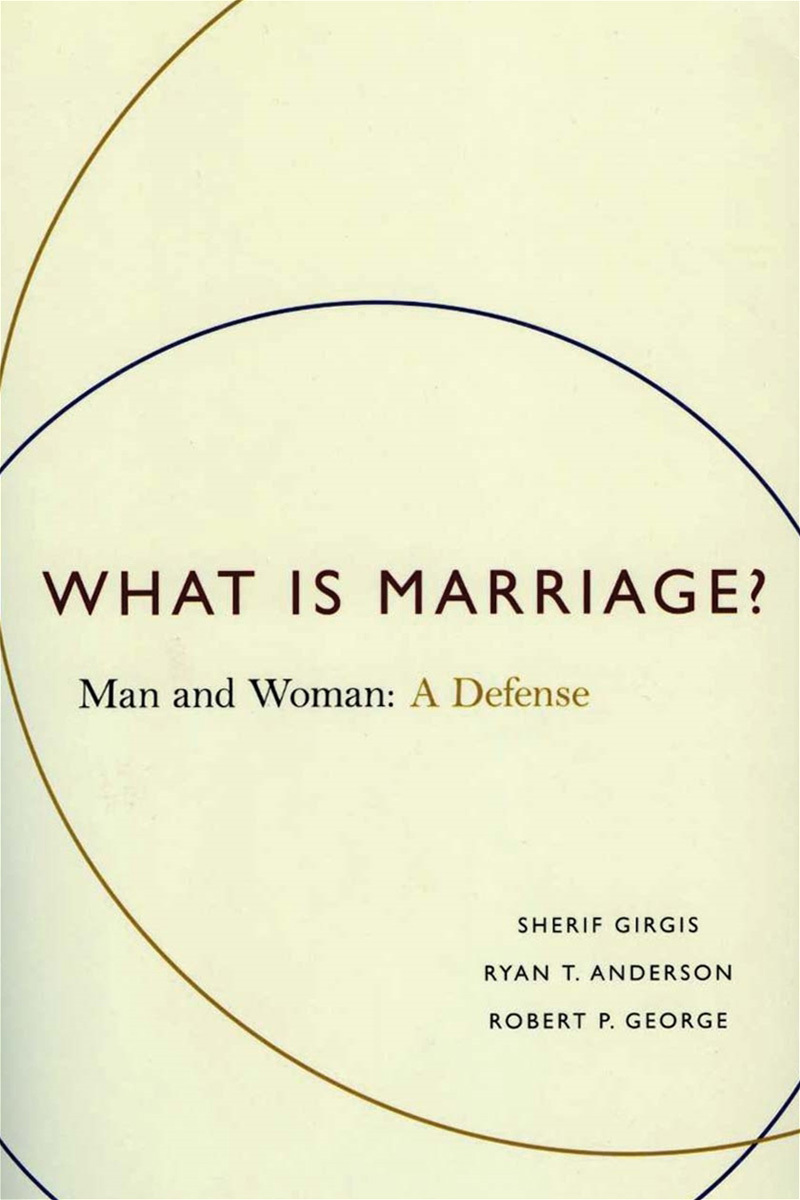 What Is Marriage? Man and Woman: A Defense

What Is Marriage? Man and Woman: A Defense

Until yesterday, no society had seen marriage as anything other than a conjugal partner­ship: a male-female union. What Is Marriage? identifies and defends the reasons for this historic consensus and shows why redefining civil marriage is unnecessary, unreasonable, and contrary to the common good.

This is the burden of the question the book attempts to answer: what is marriage? The authors suggest it’s a “comprehensive union of persons” (23), which must include a certain kind of bodily union, namely coitus. Even when it doesn’t cause conception—and even when conception isn’t desired—only coitus coordinates two people toward the same end. As they put it, “In coitus, and there alone, a man and a woman’s bodies participate by virtue of their sexual complementarity in a coordination that has the biological purpose of reproduction—a function that neither can perform alone” (26).

Yet there is “some basic connection,” the authors contend, “between the comprehensive good of procreation (hence family life) and the bond of marriage” (29). Once again, the conjugal view explains the relationship: the act that consummates the marriage is also the sort of act that creates new life. Whatever their moral status, the authors suggest, “relationships of two men, two women, or more than two . . . cannot be marriages because they lack this inherent link to procreation” (30). It’s a link that need not actually result in children: people who engage in coitus cannot control whether the act leads to children. But only those unions that engage in coitus are “true marriages.”

Such is the center of their argument. Yet Girgis, Anderson, and George don’t rest their case there. They go on to critique the libertarian notion that the state should give up its concern for marriage. Additionally, they argue forcefully that revising marriage (further) will make marriage less plausible, expand the size of the government, undermine friendship, and threaten religious liberties. To round things off, they argue that the case for marriage “respects the principle that people of all inclinations have equal dignity and title to all the same rights,” and respond to what they call “the cruelty objection,” or a litany of objections all loosely unified around the theme that the conjugal view wins for the many “at a cruel cost to the few.” These are serious chapters, carefully argued, and deserve close scrutiny. I pass over them here only for reasons of space.

Yet while the authors make a thorough and compelling case, it’s not clear whether in the last analysis it will be persuasive to those who don’t already share their position. I note one worry, among others, about their conception of bodily union. The authors spend a good deal of time responding to the “infertility objection,” and rightly so. Yet if coitus is necessary for marriage, I was surprised to see they didn’t give much space to what we might call the “incapacity objection.” In short, what of the paraplegic man who wishes to marry his fiancée but is incapable of any lower body movement, much less coitus? If the state’s recognition of marriage is tied to sexual complementarity on grounds that couples can perform reproductive acts, then it seems such unions wouldn’t constitute real marriages. (This objection was raised by John Corvino in Debating Same-Sex Marriage and, I believe, elsewhere.)

What Is Marriage? won’t swing the tide of public opinion, of course, which has almost certainly been driven by subrational causes. Intuitions are formed long before they confront arguments, and it’s hard to come up with a set of arguments that would feel more persuasive than photos of gay couples getting married or videos of celebration at gay weddings. I make the point not to diminish the quality of What Is Marriage?, but simply to point to the inevitable limits on its success. It may persuade Anthony Kennedy (though I suspect without a response to the “incapacity objection,” that’s unlikely), but it probably won’t persuade those already committed to their position.

Yet for evangelicals, it’s a crucial book to read and digest, as it augments our own approaches in places where we tend to be the weakest. For one, the authors make it clear their position depends on a conception of the human person that treats the body as a constituent part. The dispute over gay relationships is, within the church, partly a dispute over the nature and content of scriptural authority. But it’s also a dispute over bodies and the meaning of our sexual actions through them. It is this latter aspect, invariably more philosophical in orientation, that evangelicals tend to be weakest at understanding and incorporating into their arguments. While I don’t think Girgis, Anderson, and George explore the phenomenological aspects of embodiment nearly enough, evangelicals could learn much from their insistence that bodies matter and their descriptions of how.

What’s more, evangelicals worried about whether we should approach these questions through the framework of natural law would still benefit from careful consideration of this work. Even if it turns out to be missing key components for those wishing to describe what marriage is—an explicitly theological dimension that ties the sexual complementarity of marriage to the sacrificial love of Christ for his church (Eph. 5:22-33)—that doesn’t prelude us from seeing how far we can reason from creation on terms that don’t require Christian theological commitments to accept.

Whatever happens with the Supreme Court, questions about homosexuality and gay marriage will doubtless be around for years to come. What Is Marriage? is the best philosophical treatment I’ve read of the question. Its relative brevity and accessibility give it a wide utility, and whatever shortcomings it may have are amply overcome by the many virtues of the arguments within.

Addendum: “Yet if coitus is necessary for marriage, I was surprised to see they didn’t give much space to what we might call the ‘incapacity objection.’” Due to my own fault, I missed the authors’ response to this objection in footnote number five to the appendix. There they state that even heterosexual unions incapable of coitus are “incomplete” without consummation, but that inquiring about the union’s true status would be “invasive” and that recognizing such marriages wouldn’t undermine the public meaning of marriage. I regret my oversight and note only that given its relative importance, this point belongs in the body of the text and not a footnote.