In From Eden to the New Jerusalem: An Introduction to Biblical Theology, T. Desmond Alexander demonstrates the rare ability to make the complex simple without patronizing the reader with the simplistic. Divided into 6 sections on various themes, with an introduction and conclusion (8 chapters total), Alexander’s introduction to biblical theology, traces integral themes from creation to the new creation—hence Eden (Gen. 1–3) to the New Jerusalem (Rev. 21–22). In each theme, he employs his expertise in Genesis (cf. From Paradise to Promised Land, plus six scholarly articles on Genesis, 193) to show how the meta-narrative of the Bible is organically developed from the seeds sown in Moses’s first book.

For better or worse, Alexander avoids discussion about previous approaches to biblical theology and other matters of prolegomena. He denotes in the introduction that his approach begins at the end, and reads the parts in light of the whole: “As often is the case, a story’s conclusion provides a good guide to the themes and ideas dominant throughout” (10). While admitting that this approach has limitations, he proceeds to look at 6 major themes in chapters 2–7.

In his first substantial chapter, Alexander devotes 60 pages to the theme of God’s dwelling: in Eden, in the tabernacle and temple, and in the church, and in the eschatological Jerusalem. Drawing on the work of G. K. Beale and others, Alexander shows why the idea of temple is central to the entire storyline of the Bible. From start to finish, God has intended to dwell on earth with his people; and while sin has hindered this object, it has not overturned God’s eschatological designs. Quoting text after text, Alexander walks through the Bible, demonstrating how God’s dwelling place is of chief concern to God, his covenant, and his covenant people. While Alexander compares biblical imagery and concepts to those of the ancient Near East, he clearly distinguishes Israel from its pagan neighbors, citing YHWH himself as the source of all revelation.

Chapter 3 tackles the theme of kingship. Starting in Genesis, Alexander shows how humanity was created by God to serve as “viceroys” on the earth. Sadly before the Garden-building project (as described in chapter 2) could get off the ground, Adam and Eve forsook their assignment as royal priests. Grasping for God’s scepter, they “dethroned” God on earth; consequently, the first couple make themselves (and all their offspring) enemies of God (cf. Rom. 5). Mankind’s hope is ripped from their hands, but God promises to reestablish and repopulate his kingdom with all those who trust in the seed of the woman, the son of Abraham, the son of David. Alexander traces God’s regal promise to Jesus Christ in the New Testament. While never relinquishing universal control, God’s plan to reclaim the earth and put it under his feet, included putting all things under the feet of his Son, not simply as God, but as a man, a Second Adam. But to do that meant defeating Satan and atoning for sin. Alexander addresses these matters in chapters 4–5.

In chapter 4, Alexander shows how Scripture outlines a conflict that began in the garden and has spread into the entire universe. Moving from Old to New Testament, he shows how spiritual warfare is a significant but overlooked theme in biblical theology. In this chapter, he makes two astonishing but textually-developed claims: (1) through the deception of man, Satan stole the world from mankind, thus becoming an illicit “god of this world” (102), and (2) Satan, acting through the Sanhedrin as a venomous brood of vipers tempts, accuses, and bruises God’s Son (114–15). Yet, through his cross, Satan’s greatest victory becomes his decisive defeat.

Chapter 5 outlines the effects of the cross in terms of Christ as God’s sacrificial lamb. Alexander starts in Revelation explaining the lamb/lion imagery before turning to the exodus theme where Christ is the perfect Passover lamb. Summarizing his points, he writes, “Like the original Passover sacrifice, his death atones for the sin of people, his blood purifies and cleanses, and those who eat his body at the Lord’s Supper share in his holy nature” (135). While his first two points are edifying and illuminating, his third point concerning how the Lord’s Supper (the NT’s Passover) “sanctifies” the Christian is rather ambiguous. Is holiness infused by participating in the Lord’s Supper? Is it a commemorative means of grace where the heart is strengthened by recalling Christ’s sanctifying work? Or is it something else? Surely, denominational differences affect the discussion, but for that reason, more specificity is needed. 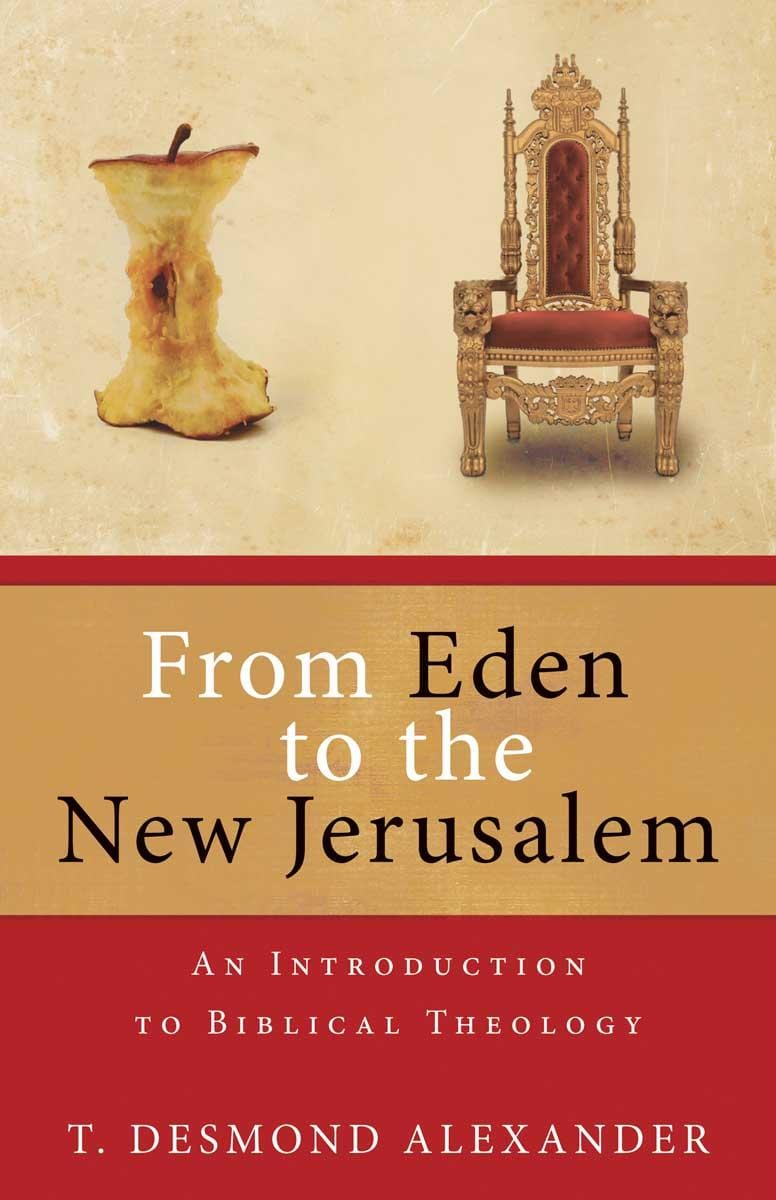 From Eden to the New Jerusalem: An Introduction to Biblical Theology

From Eden to the New Jerusalem: An Introduction to Biblical Theology

God has given us the reasons for creation and our existence in the Bible. ”by resolving an intricate plot that sheds light on the entire story,“ Alexander writes. Using this theory to start from the denouement, or resolution, in Revelation’s last verses and work backward, Alexander pieces together the Bible’s overarching plot. The resulting picture reveals the reasons for creation and life that have eluded those who seek to answer life’s biggest questions without first placing themselves in God’s story.

Finally, in the last two chapters, Alexander examines the themes of holiness (ch. 6) and community (ch. 7). In the former he examines the idea of God dwelling with man, and how purity and holiness are necessary for such fellowship. Still, he does not propound a legalistic theology of holiness by outward standards, so much as he puts forward an eschatological promise that one day the entire earth will be holy as God dwells again with his redeemed people. He ties this into the tree of life and shows how the gospel has ecological implications. Then he turns to discuss the organic growth of God?s people over time. He returns to capture the idea that history is divided into two kinds of people, dwelling in two kinds of cities (Zion or Babylon), living for two different purposes (self-satisfaction or Godward love and holiness).

On the whole, From Eden to the New Jerusalem is a very rewarding book. In less than 200 pages, Alexander makes at least 6 trips from Genesis to Revelation, uncovering a wide variety of themes that inter-relate and develop the rich tapestry of redemptive history. It assumes that the reader has a general awareness of the Bible already and a conception for biblical theology. Someone without this background knowledge, a new convert, for instance, could get lost connecting the dots. But with that said, Alexander’s clear style and copious biblical quotations make the Bible come alive. In fact, Alexander provides an incredible service to teachers by collecting, organizing, and commenting on so many biblical themes. Likewise, as his footnotes demonstrate, he is a well-read and well-published scholar. For academic-types, reading his bibliography provides ample material to consider after this book.

So, From Eden to New Jerusalem is a must read for any preacher-teacher who is desirous of understanding or communicating biblical theology better. Moreover, this book would be an excellent second-level biblical theology to go through in a classroom setting or in a small group. (A first level biblical theology would be something like Gospel and Kingdom or According to Plan by Graeme Goldsworthy). Finally, Alexander’s chapter on the temple is an excellent place to direct anyone interested in this biblical but somewhat esoteric theme. It is more concise and accessible than G. K. Beale’s work on the subject, and therefore a better resource for transmission.