With many others I have been anticipating the publication of Scott Manetsch’s Calvin’s Company of Pastors: Pastoral Care and the Emerging Reformed Church, 1536–1609. It’s not quite what I expected—that is, a more thorough update to Phillip Hughes’s The Register of the Company of Pastors of Geneva in the Time of Calvin (1966). We needed something like that, even if it were a niche publication that would seem too much like bookkeeping for a general audience. However, Manetsch’s book is that and much more.

Full of fresh scholarship (including analysis of records never examined closely), Calvin’s Company of Pastors is a fascinating read. While many studies tilt toward intellectual history, Manetsch follows in the trail of more recent (and obscure) social historians. His analysis encompasses broader social factors, and he draws conclusions on the basis of sources often omitted from other accounts. Like a good sermon, the enormous weight of firsthand research stands behind rather than in front of the story.

Supporting the footnotes and tables is a lively narrative that draws us into a remarkable ministry of a team of pastors, elders, and deacons. Despite the title, Manetsch, professor of church history and the history of Christian thought at Trinity Evangelical Divinity School outside Chicago, shows Calvin was merely the moderator of a Company of Pastors who resisted any cult of personality.

Manetsch sets the context by noting the early reformation of the Genevan church reduced the city’s clerics (including monks and nuns) from 500 to 15, turning the convent and two monasteries into a public hospital and school. He observes the Ecclesiastical Ordinances, drafted by Calvin in 1541, established a rotation of ministers in all the churches to avoid the impression the ministers were preachers, not pastors.

After his return from Strasbourg in 1541, Calvin routinely preached at St. Pierre on Sundays and at the temple of the Madeleine during the workweek. This practice of rotation was designed by Calvin to ensure Geneva’s townspeople would be edified by a variety of preachers; it also affirmed the collegial nature of pastoral ministry in the city and discouraged ministers from viewing their preaching posts as personal fiefdoms.

Few historical figures have suffered more in terms of rumors passing for fact. It’s long been observed by specialists (Roman Catholic as well as Protestant) that Calvin was far from the Ayatollah one typically finds in the paragraph devoted to him in high school textbooks. Manetsch dispels these rumors with close attention to primary sources.

In that vein, Manetsch also assesses the church records (or registry) in remarkable detail. The examination of disciplinary cases alone renders this book helpful for anyone interested in an accurate portrait of a much-misunderstood practice.

Contrary to the caricatures of a repressive regime, the records show a concern primarily “with educating the ignorant, defending the weak, and mediating interpersonal conflicts.” Calvin and others repeatedly affirmed that the consistory couldn’t administer legal or temporal punishments (i.e., those without “the spiritual sword of God’s Word”) and that “corrections are nothing but medicine to bring sinners back to our Lord.” Calvin warned against discipline degenerating into “spiritual butchery,” and was especially critical of undue rigor in both Roman Catholic and Anabaptist discipline. 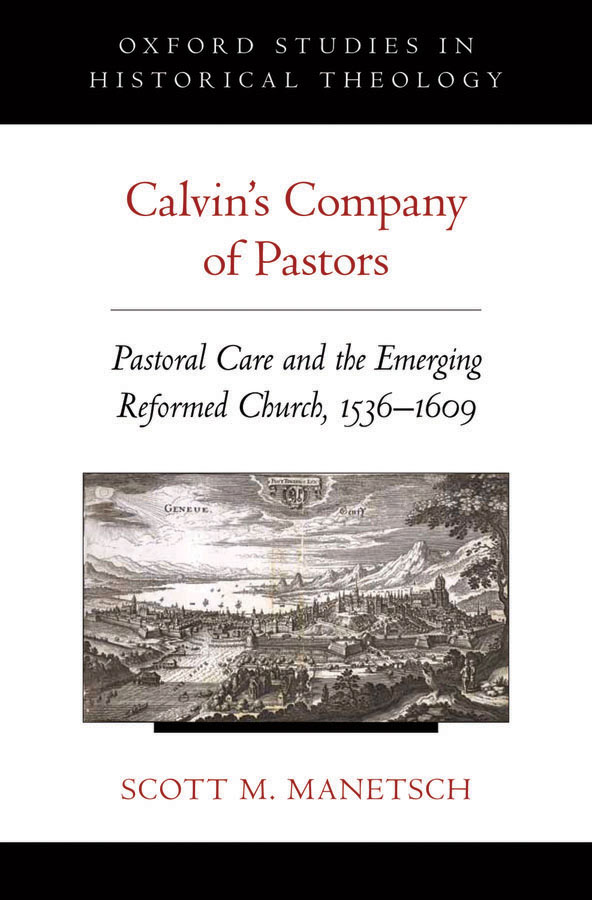 In Calvin’s Company of Pastors, Scott Manetsch examines the pastoral theology and practical ministry activities of Geneva’s reformed ministers from the time of Calvin’s arrival in Geneva until the beginning of the seventeenth century. Geneva’s pastors from this period remain hidden from view, cloaked in Calvin’s long shadow, even though they played a strategic role in preserving and reshaping Calvin’s pastoral legacy.

Many of the issues involved ensuring parishioners knew the Christian faith well enough to receive Communion. One couldn’t receive the sacrament while embracing Roman Catholic or Anabaptist beliefs and practices; most cases, however, were in the category of counsel, admonition, and instruction rather than serious censure (much less excommunication). By design, excommunication was to be rare. Moreover, these matters had to remain private; gossip could also provoke a letter from the consistory.

It should be noted no minister or elder—even Calvin—could exercise discipline individually. All actions were those of the Consistory—ministers and elders—as one body in common consent. Manetsch even relates cases of ministers being examined and removed from office. And despite the stereotype, he reports sexual sins accounted for “only around 13 percent of all suspensions” from Communion. In some cases, the Consistory petitioned the Small Council to provide gainful employment for young women and “defended the cause of helpless orphans, poor laborers, mistreated prisoners, despised refugees, and social misfits.”

The same rigorous research is evident in relating the development of the academy (which Lambert Daneau called “one of the richest markets for intellectual commerce in the world”) and the makeup of the pastors, professors, and students drawn to Geneva. Though taken mostly from “the urban classes of French-speaking Europe as well as France’s nobility,” many others came from Italy, Spain, England, Poland, and beyond. He also points out the Company of Pastors’ remarkable focus and energy for missions—including the first Protestant mission to the New World (in Brazil).

Exploring the ministry of the word and sacraments in Geneva, Manetsch reveals the relative absence of preaching in the city prior to the Reformation. As in most places, sermons were rare except for the occasional appearance of a traveling preacher.

Contrary to general impression, Calvin wasn’t the sole pastor of St. Pierre’s, the city’s main parish, but shared the rotation with others. Sermons were frequent (several on Sunday and others throughout the week; Calvin preached 18 to 20 per month). Nevertheless, Calvin and the Company limited services to no longer than an hour. In addition to Wednesday prayer services there were weekly discussions of biblical passages, with parishioners taking a lively role.

One of Manetsch’s striking points, particularly in view of contemporary practice, concerns the redefinition of pastoral ministry. First, there was a determined effort to avoid a cult of personality: “Calvin the preacher almost never speaks of his personal affairs.” It’s Christ’s ministry, not the minister himself, who should be front and center among God’s people. Second, Manetsch notes, “The preacher was not the proprietor of a pulpit or the captain of his congregation: it was Christ who presided over his church through the Word.”

As an institution, the Company of Pastors was built on the basic principle that all Christian ministers possessed equal authority under the Word to proclaim the gospel and administer the sacraments. Hence, Calvin and his colleagues rejected any notion of preeminence or hierarchy of authority within the pastoral company. . . . At least in theory, ministers of the Christian gospel were interchangeable.

Indeed, each would submit to the decision of the majority. Manetsch points out Calvin’s comparison of ministers to “friends of the Bridegroom” who have the privilege of being “put in authority over the church to represent the person of the Son of God.” Nevertheless, they ought to observe the difference between “themselves and what belongs to the Bridegroom” and not “stand in the way of Christ alone having the dominion in his church or ruling it alone by his Word.” Calvin continued, “Those who win the church over to themselves rather than to Christ faithlessly violate the marriage which they ought to honor.”

In fact, the fraternal character of ministers becomes a recurring feature in Manetsch’s study. “The fewer discussions of doctrine we have together, the greater the danger of pernicious opinions,” Calvin observed. “Solitude leads to great abuse.” Consequently, there were ample opportunities for closed-door peer reviews among the pastors, ranging from sermon evaluations to doctrinal discussions to the handling of church affairs.

There are a few quibbles with Calvin’s Company of Pastors that could be raised. Manetsch presents a helpful survey of the worship service in Geneva, but some elements of the liturgy Calvin drafted aren’t included. Readers may also find it somewhat distracting that “Reformed” is “reformed” (lowercase), even though references to Roman Catholic, Lutheran, and Anabaptist traditions are all capitalized. Though likely unintended, this may undermine the point abundantly supported throughout the work that Calvin was a member of and contributor to a tradition larger than himself. However, these in no way detract from the usefulness of a study that brings together such breadth of research in one volume.

Michael Horton is professor of systematic theology and apologetics at Westminster Seminary California. The author of many books, including The Christian Faith, Ordinary, Core Christianity, and Recovering Our Sanity, he also hosts the White Horse Inn radio program.