The long wait is almost over! Since the third installment of The Lord of the Rings trilogy hit movie houses across the world in 2003, Tolkien fans have yearned to see the prequel to The Lord of the Rings transferred to the screen with equal power and beauty. Finally, after nearly a decade, that yearning is about to be satisfied.

And yet, as the world awaits the release of The Hobbit, Part I, it is worth remembering that Tolkien’s epic fantasies have not been universally hailed as great works of art. Many academics and literary critics in Tolkien’s day—and many still today—dismissed Tolkien’s tales as “mere” children’s literature not worthy of serious academic consideration.

Luckily for Tolkien’s millions of defenders, the architect of Middle-earth did not leave his fans to face alone and undefended the critiques of the literati. One year after publishing The Hobbit, Tolkien presented a lecture (on March 8, 1939) at the University of St. Andrews on the subject of fairy tales. While working on The Lord of the Rings, Tolkien expanded the lecture into a lengthy essay, “On Fairy-stories,” which was first published in Essays Presented to Charles Williams (1947), a collection edited by Tolkien’s friend and fellow fantasy author, C. S. Lewis.

Although the essay stands alone as one of the finest critical studies of the genre, it also serves as a powerful apology for Tolkien’s own work in the field. Those wishing to defend The Hobbit and The Lord of the Rings as works of literary merit that belong, not in the nursery, but in the library of timeless world classics, need look no further than “On Fairy-stories.”

Perhaps the most persistent (and nastiest!) critique leveled against Tolkien is that his work is “escapist,” that it draws its readers away from the rigors of the “real world.” Tolkien gives the lie to this critique by reminding his readers of something so obvious it is often overlooked: “Why should a man be scorned if, finding himself in prison, he tries to get out and go home? Or if, when he cannot do so, he thinks and talks about other topics than jailers and prison-walls?”

Tolkien is not thinking here of a killer or rapist confined to a jail cell for the protection of society, but of a political or military prisoner who has been captured by the enemy. In the latter case, the prisoner who escapes is neither naïve nor juvenile. Indeed, he is both practical and realistic. Far from donning rose-colored classes or acting like a cock-eyed optimist, he bravely and maturely refuses to define himself by the artificial boundaries around him and yearns for the free open air that he knows exists outside his prison walls. 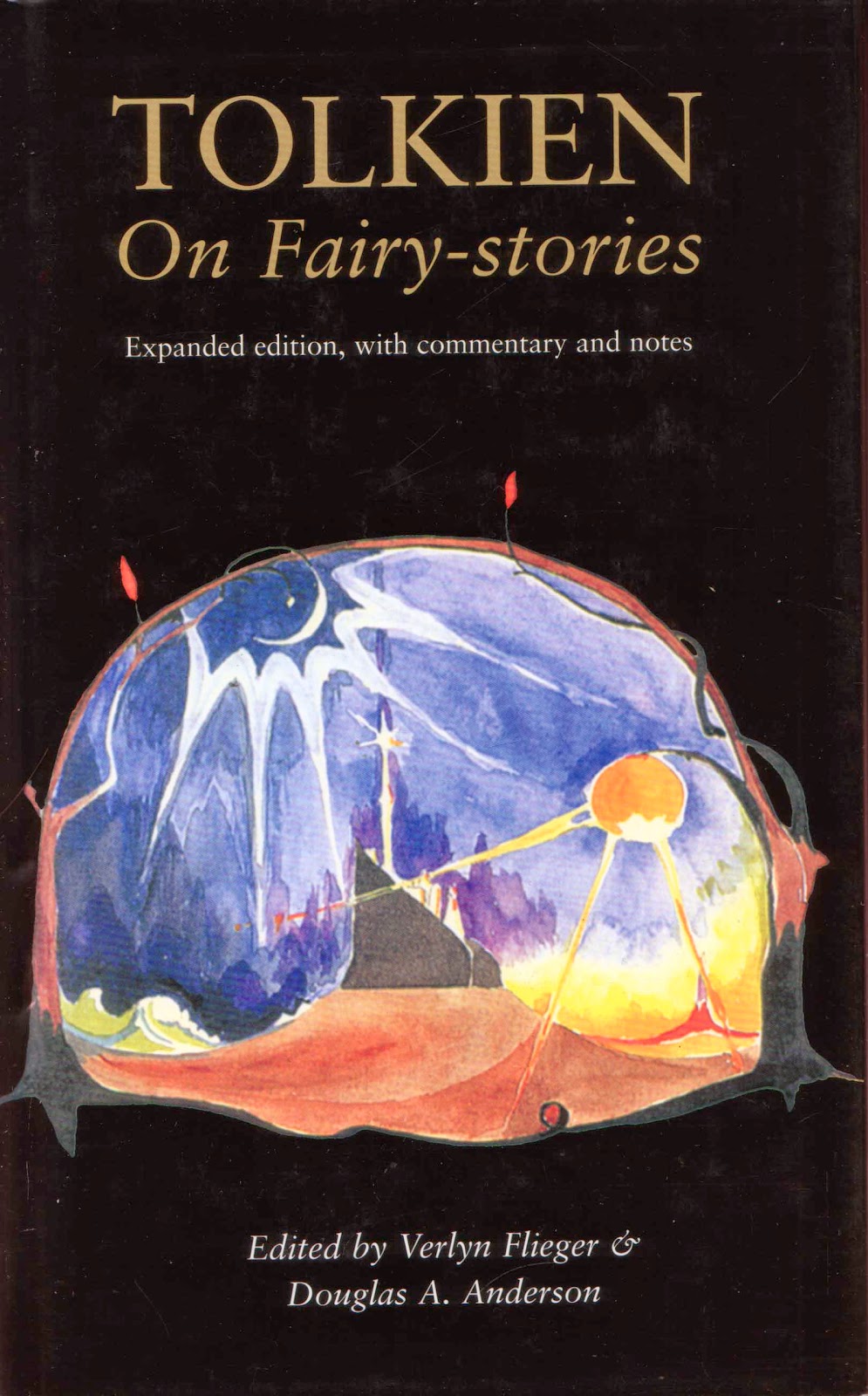 J. R. R. Tolkien’s “On Fairy-stories” is his most-studied and most-quoted essay, an exemplary personal statement of his views on the role of imagination in literature, and an intellectual tour de force vital for understanding Tolkien’s achievement in the writing of The Lord of the Rings.

Bilbo, Gandalf, Frodo, Aragorn, and Faramir are all escapists, for they risk their lives to free the world of Middle-earth from the control of forces (Smaug, Sauron, Saruman, Shelob) that would steal life, kill joy, and destroy the earth. They do not accept the creeping darkness that relativizes, existentializes, and uglifies. Rather, in the face of this onslaught, they uphold a counter-vision of Goodness, Truth, and Beauty.

But what of that world they would save and redeem? Is it not merely a soap bubble, a figment of an over-active imagination that has nothing to do with that “real” world in which we must live? Tolkien’s answer is a resounding “no!”

In the best fantasy, the kind that really matters, the writer does not cobble together magical elements and call it a world. To the contrary, writers like Tolkien (and Lewis) create a Secondary World that possesses its own internal consistency. And creating such a world, Tolkien insists, calls for greater skill and insight than “realistic” novels that simply record what they see around them without subjecting their work to a greater coherence.

True fantasy is an exacting art that calls for both vision and precision. When it is fully achieved, it evokes awe and wonder: not only toward the Secondary World but toward the Primary World as well. For fairy stories have the power to cleanse our perception and, by so doing, enable us to see our own world afresh, as if for the first time.

When we encounter a centaur or a satyr in the Secondary World, it enables us to see, truly see, the horses and goats of the Primary World. We must “clean our windows,” Tolkien writes, “so that the things seen clearly may be freed from the drab blur of triteness or familiarity.” Fairy stories, though they take place in magical lands populated by magical beasts, deal mostly with “simple or fundamental things.” “It was in fairy-stories,” Tolkien confesses, “that I first divined the potency of words, and the wonder of the things, such as stone, and wood, and iron; tree and grass; house and fire; bread and wine.”

Very well, concedes the critic, the fantasy world may have its own reality, but so what? Isn’t the imagination itself an unreliable organ of perception? Does not fantasy foster lies and illusions?

Well, yes, it can, but then so can every other human activity. Fantasy, it is true, can be used for evil, but then “of what human thing in this fallen world is that not true? Men have . . . imagined gods, and worshipped them,” but they have also “made false gods out of other materials: their notions, their banners, their moneys; even their sciences and their social and economic theories have demanded human sacrifice.”

There is nothing inherently delusional, deceitful, or irrational about fantasy. It “does not destroy or even insult Reason.” In fact, Tolkien asserts, the “keener and the clearer is the reason, the better fantasy will it make.” If a reader were unable to distinguish between reality and illusion, he would not be able to enjoy fairy stories, for fairy stories presuppose a knowledge of the way the world normally runs.

Works like The Hobbit are based “on a recognition of fact, but not a slavery to it.” The author of an epic fantasy must know the world as God created it before he can proceed to sub-create his own fantasy world. And when he does so, he acts, not in opposition to his creator, but in sympathy with him. “Fantasy remains a human right: we make in our measure and in our derivative mode, because we are made: and not only made, but made in the image and likeness of a Maker.”

Okay, the specifically Christian critic admits, perhaps fantasy violates neither reason nor the laws of God. But does it constitute a worthwhile pursuit? Do fairy stories offer anything that will edify believers or increase their understanding of God and the Bible?

As it turns out, fairy tales may draw us closer to the scriptures than any other genre.

Medieval theologians spoke of the Fall of man as a felix culpa (Latin for “happy guilt”), for they believed that the evil unleashed by our disobedience in the Garden led directly to the Incarnation. Though God demonstrated his love for us by creating us as separate creatures with our own mind and will, our misuse of that will prompted God to demonstrate an even greater love, by sending his Son into the world to die for our sins.

The most memorable fantasy stories center around what Tolkien dubs a eucatastrophe (Greek for “good down turn”), a sudden shift in the story that pulls victory out of the jaws of defeat, utter joy out of utter despair. The eucatastrophe “is not essentially ‘escapist’ nor ‘fugitive’ . . . it is a sudden and miraculous grace: never to be counted on to recur. It does not deny the existence of dyscatastrophe, of sorrow and failure . . . it denies (in the face of much evidence, if you will) universal final defeat.” According to Tolkien, the “Birth of Christ is the eucatastrophe of Man’s History,” while the “Resurrection is the eucatastrophe of the . . . Incarnation.”

The Hobbit is filled with small eucatastrophes, with Bilbo’s successes rising up out of his errors and indiscretions. But they all pale in comparison to the great eucatastrophe that comes near the end of The Lord of the Rings, when Frodo’s refusal to throw the ring into the cracks of Doom is followed by Gollum biting the ring off Frodo’s finger and then falling into the fire. This breathtaking moment, re-experienced with all its power every time the epic is re-read, is neither artificial nor “escapist,” but emerges organically out of Tolkien’s carefully crafted epic tale.

It is a story we recognize and accept, for it is the story of our salvation and that of our Primary World.

Louis Markos, professor in English and scholar in residence at Houston Christian University, holds the Robert H. Ray Chair in Humanities. His 25 books include On the Shoulders of Hobbits: The Road to Virtue with Tolkien and Lewis, From A to Z to Middle-Earth with J. R. R. Tolkien, and Tolkien for Beginners.