Historian Mark Noll once famously worried about the scandal of the evangelical mind, contending that Christians had turned their backs on the academic world. Decades before Noll’s concern, a small group of leaders were laying the groundwork for developing the Christian mind in the church’s pews.

The quest accelerated after World War II, thanks to writers and thinkers such as C. S. Lewis, Francis Schaeffer, and Carl Henry. Blending theology, philosophy, and other academic tools for popular evangelical audiences, they wanted Christians to use their minds, as well as their hearts, in the full service of Christ. 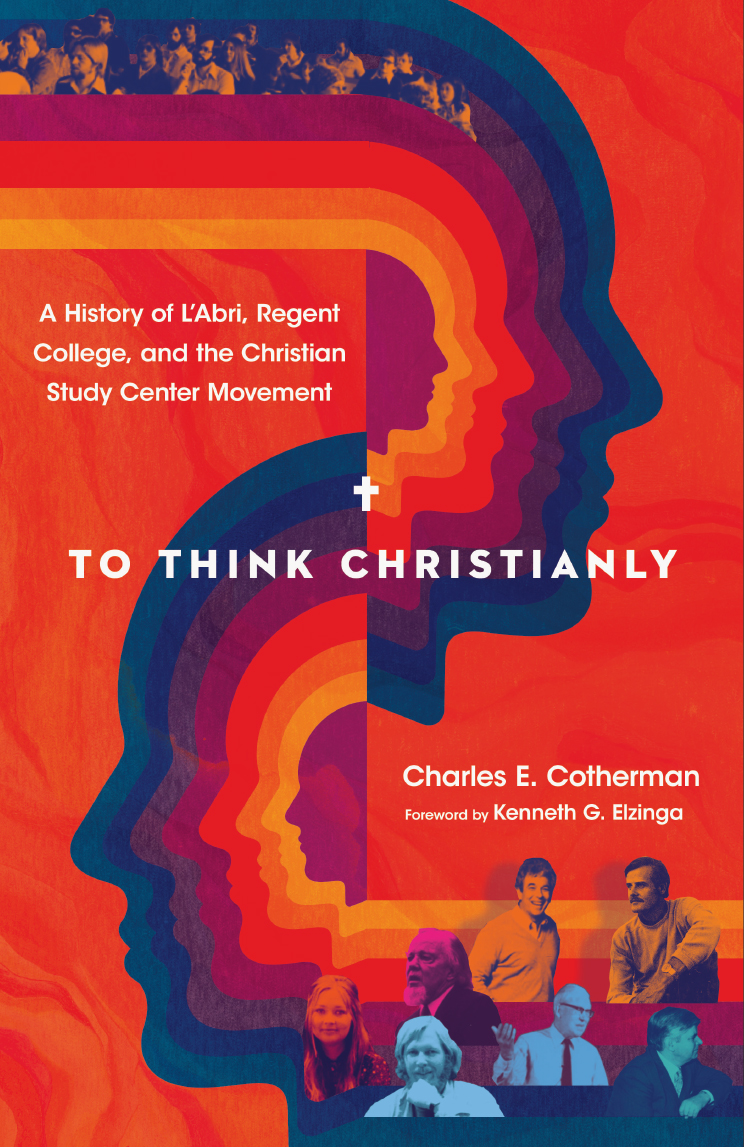 To Think Christianly: A History of L'Abri, Regent College, and the Christian Study Center Movement

To Think Christianly: A History of L'Abri, Regent College, and the Christian Study Center Movement

In this compelling and comprehensive history, Charles Cotherman traces the stories of notable study centers and networks, as well as their influence on a generation that would reshape 20th-century Christianity.

Each of these projects owed something to Schaeffer and Houston’s approaches, which combined intellectual and cultural awareness with compelling spirituality, open-handed hospitality, relational networks, and a deep commitment to the gospel’s significance for all fields of study—and all of life. Cotherman argues that the centers’ mission of lay theological education blazed a new path for evangelicals to fully engage the life of the mind and culture.

Charles Cotherman traces the fruits of this movement with new insights and in-depth research in this new book, To Think Christianly: A History of L’Abri, Regent College, and the Christian Study Center Movement.

Decades before Noll’s concern, a small group of leaders were laying the groundwork for developing the Christian mind in the church’s pews.

The book records the stories of leaders who paved the way for groups such as The Gospel Coalition, 9Marks, and the other restless and Reformed organizations. These leading thinkers never launched a formal coalition, but Francis Schaeffer, R. C. Sproul, Jim Houston, and others created an unofficial network, formulating how to help the average Christian to know God and to pay close attention to theology. In an age of growing secularism, they offered a new idea—to think Christianly, to develop a Christian worldview, or to develop the Christian Mind, the title of a 1963 book by Harry Blamires, a British scholar influenced by C. S. Lewis.

Charles Cotherman starts at Schaeffer’s L’Abri in the Swiss Alps, then flies to Regent College in Vancouver, then stops in with the Jesus movement at Berkeley, California. He also visits R. C. Sproul’s Ligonier Valley Study Center in western Pennsylvania and the C. S. Lewis Institute in Washington, D.C.

The personalities were quite different. Had they tried to form a coalition, they might’ve clashed with one another. But Cotherman, a Pennsylvania pastor with a PhD in history, found common ground among them—but not so much theologically, since these leaders fell on different sides of issues of Scripture’s authority and apologetic method. What they shared was a zeal for Christ’s lordship and a heart for applying the Bible to philosophy, business, art, music, news, theater, and film. They wanted to enlist others to pass the passion on to business leaders, mothers, writers, musicians, artists, athletes, journalists, and everyone else.

Francis Schaeffer started the conversation for evangelical Christians in the 1950s. As a kind of low-key alternative to evangelist Billy Graham’s well-publicized crusades, Schaeffer and his wife mixed hospitality with evangelism and answers to hard questions at L’Abri in Switzerland, and later in branches in Holland and England. They offered much more than a bed and breakfast. They mixed work and study with long after-dinner conversations about rock music, current films, Marx, Hegel, and Jesus Christ.

In an age of growing secularism, they offered a new idea—to think Christianly, to develop a Christian worldview, or to develop the Christian mind.

Schaeffer came to faith by reading philosophy books in high school. In contrast to many other believers of his era, he never went forward at a Billy Sunday rally. As an inquiring agnostic, he figured he should read the Bible along with Plato, Aristotle, Kant, and the others. His conclusion:

The strength of the Christian system—the acid test of it—is that everything fits under the apex of the existent, infinite-personal God, and it is the only system in the world where this is true. No other system has an apex under which everything fits. That is why I am a Christian and no longer an agnostic.

He’d read Reformed theology in Charles Hodge’s three systematic theology volumes, but felt that relativism in philosophy was changing the conversation among educated Americans. He saw that the Dutch theologians like Abraham Kuyper were ahead of Americans in their presuppositional thinking, or questioning the basic premises of secular assumptions about how we can know what we know.

Cotherman traces L’Abri’s rapid rise, which spread by word of mouth and through Schaeffer’s books defending the Christian faith against modern alternatives. As he explains, “Schaeffer invited a generation of evangelicals to engage their minds and the world with a scope as wide as creation and a confidence rooted in the trustworthiness of God.” Cotherman also reveals the challenges for Schaeffer and his family. Schaeffer’s ministry was highly relational—and exploded in popularity. They were quickly facing large crowds, interested in a serious evangelical conversant with painting, existentialism, abortion, and Hinduism.

Cotherman also has an interesting insight into Schaeffer’s earlier 1940s years, when he’d been a rising star in fundamentalist circles in the United States. Already a believer, he went to Europe after World War II, questioned the roots of his faith, and returned stronger as an evangelical. Schaeffer later wrote of that shift in his more personal book, True Spirituality. Cotherman thought Schaeffer’s influence appeared to have peaked by 1955. “Francis Schaeffer seemed well past his influential days,” he writes. Schaeffer was, however, actually just coming into his years of even greater influence in the 1960s and 1970s.

Cotherman then goes on to describe the rise of Regent College as a serious academic effort to give students a post-graduate course in Christian thinking, eventually becoming a master’s degree program in Vancouver, Canada. For some, it was the next stop after a few months at L’Abri. With a background in the Plymouth Brethren movement, Jim Houston also wound up collaborating with some initiatives that became study centers instead of colleges, strategically located near large American universities. Examples were launched at the Universities of Virginia and Berkeley, California, to help students learn to think Christianly, to take thoughts captive for Christ.

Meanwhile a young R. C. Sproul was starting the Ligonier Valley Study Center in 1971 near Pittsburgh, with backing from patron Dora Hillman, a wealthy widow. Sproul got practical tips from Schaeffer on L’Abri as a model for the study center, with students living in homes with staff families.

Sproul went on to become an influence in the lives of former Nixon administration lawyer Charles Colson and other key evangelical leaders. The study-center ministry included inmates from Colson’s prison ministry, including softball games in which Sproul sometimes argued with the umpires.

“AUTHORITY!” would come back loud and clear from the inmates on the field. He’d taught them well.

The study center was influential in other ministries in the Pittsburgh region, as businessman Wayne Alderson brought union leaders out from Pittsburgh to help resolve labor-management tensions through Sproul’s teaching. Sproul responded to the challenge of growth by ending his residential ministry and moving to Orlando to become a national teacher of theology. He was a key player in what became a strong Calvinistic influence in the larger evangelical movement, as explained in Collin Hansen’s 2008 book, Young, Restless, Reformed.

Cotherman explains how Sproul gained a vision for multiplying his audience to thousands of students with new video and audio resources. Churches and families suddenly had Sproul teaching them systematic theology and philosophy classes in living rooms and Sunday school classrooms.

Out in California, Cotherman traces New College Berkeley back into the Jesus movement, through believers who wanted to think Christianly. These people strove to be in the world but not of it, adapting to the 1960s West Coast counterculture, identifying as the Christian World Liberation Front in the early years. Sharon Gallagher visited L’Abri and read Schaeffer’s books, with a new excitement about faith and culture, having grown up in a more fundamentalist background. Journalist David Gill also appreciated Schaeffer’s thinking, proposing a L’Abri branch on the Berkeley campus, using an old fraternity house. Struggling over whether to become a degree-granting college, they eventually became New College Berkeley.

Churches and families suddenly had Sproul teaching them systematic theology and philosophy classes in living rooms and Sunday school classrooms.

Most of these groups decided not to become accredited colleges, usually because of financial and credential challenges. None of these groups found easy solutions for the balance between seemingly conflicting priorities of study, hospitality, evangelism, discipleship, and academic excellence. These ventures had two solid models to consider: Regent College, with Houston’s desire to invade the university world on its own terms, and L’Abri, with Schaeffer’s more informal pastoral approach to helping young people think Christianly.

At the University of Virginia, Cotherman traces the center’s origins back to a providential meeting between campus minister Daryl Richman and student Bob Bissell. Lifting weights in the gym, Richman shared his faith with Bissell, whose friends started gathering for small-group fellowship. Eventually that gym connection would indirectly help the university become a hub for various evangelical initiatives, including a study center. Strengthening the UVA venture was an informal partnership with Trinity Presbyterian Church (PCA) and pastor Skip Ryan, then a rising star in the PCA who had spent six months at L’Abri. Cotherman captures how this parachurch came alongside the church in an unusual but important partnership.

The strength of Cotherman’s story is how he traces the development of the evangelical mind through friendships and personalities.

The strength of Cotherman’s story is how he traces the evangelical mind’s development through friendships and personalities. In many respects, Cotherman mixes both the skills of an excellent news reporter with the benefits of academic research, along with a keen grasp of the relationship/friendship emphasis underlying all these ministries. If journalists write the first rough draft of history, historians such as Cotherman write the second.

Schaeffer, Sproul, Houston, and the others never had a formal meeting to compare notes; they were relationally oriented believers turned off by popular three-step formulas floating around other evangelical ministries. They would never, for example, come up with four or six spiritual principles to invade the secular university or grow the Christian mind. But Cotherman’s story reveals how the pioneers met here and there and corresponded by letter, long before email. They created a growing band of brothers who pioneered to help many Christians to love the Lord with all of their minds as well as their hearts.

Russell Pulliam is a columnist for The Indianapolis Star, as well as the director of the Pulliam Fellowship.