The prophet Jeremiah diagnoses the human condition in one chilling sentence: “The heart is deceitful above all things, and desperately sick; who can understand it?” (Jer. 17:9). Our hearts’ deceitfulness affects all of our opinions, including our views on race. Ken Wytsma’s latest book, The Myth of Equality: Uncovering the Roots of Injustice and Privilege, confronts the outworkings of our deceitful hearts on this topic.

Wytsma—lead pastor of Antioch Church in Oregon and founder of The Justice Conference—is white, and in the eyes of some that fact may immediately discredit him on this subject. But his frank and vulnerable understanding of his own heart makes this book a necessary and poignant read.

The first section provides a broad summary of the history of race, with an emphasis on the United States. Wytsma effectively argues that from the beginning of our nation’s history, immigration policies favored white people. The British colonists preferred people who looked like them, resulting in policies that made it more difficult to become a full citizen unless you were white and wealthy. 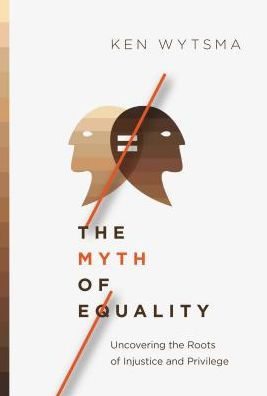 The Myth of Equality: Uncovering the Roots of Injustice and Privilege

The Myth of Equality: Uncovering the Roots of Injustice and Privilege

But extra immigration and citizenship hurdles weren’t the only challenges faced by minority groups. Black people were enslaved, and in the late 1800s—even after the abolition of slavery—Jim Crow laws were passed that continued to discriminate against them. The Home Owners’ Loan Corporation, created by President Franklin D. Roosevelt to stem foreclosures following the Depression, had policies that systematically excluded African Americans from receiving the same federal assistance as their white counterparts when they tried to move to the suburbs. Later, after Jim Crow ended in 1965, both President Nixon and also Reagan’s War on Drugs systematically targeted African Americans, resulting in mass incarceration.

This section of the book is challenging to read. As Wytsma piles up the evidence across hundreds of years, it’s painful to recognize the vast number of systems in place that actively hurt minorities. From initial immigration policies to zoning practices in urban neighborhoods, the deck has historically been stacked high in favor of white Americans.

While everyone should read this first section of the book, it’s not without oversights. The Myth of Equality overwhelmingly focuses on African Americans, excluding the experiences of many other minority groups who experience the pain of racism. Wytsma includes a brief passage about Asians and another on Native Americans, but the book would have benefited from more engagement with these and other groups.

The most significant issue, however, is the omission of a biblical foundation for the history of racism. In part one, Wytsma argues that racism is a new problem, only a couple hundred years old, and by examining recent human history and policymaking we’re able to trace its progress. The reality, however, is much more complex. Ever since Adam and Eve felt entitled to be their own gods, sinners will use any means—including racism—to exalt themselves over others. Racism is a symptom of sin, and an integral part of the biblical storyline.

In the book of Exodus, Pharaoh, consumed with fear at the increasing number of Israelites in Egypt, responded by enslaving them and executing any newborn male to prevent a future uprising. Later, Miriam and Aaron oppose Moses because of his marriage to a Cushite woman. While these may not be examples of racism in the modern sense of the word, they’re examples of people behaving in a discriminatory manner in direct opposition to the will of God.

The entire history of racism is far too complicated to explain in the space Wytsma had, but we wish he would have included a theological framework to help the reader understand racism as a manifestation of sin.

Equality and the Kingdom

In part two, Wytsma addresses his central thesis—that “a misunderstanding of the gospel leads to a false dichotomy” in which Christians prioritize an individual’s personal faith while ignoring the communal imperatives that flow from our salvation (6). Wytsma reframes the reader’s understanding of the gospel’s implications by expositing biblical passages on justice, the golden rule, and the imago Dei, while also showing how American evangelicalism has demonstrated a limited understanding of these teachings.

Wytsma describes two types of biblical justice: primary justice, or things as “they ought to be,” and restorative justice, referring to “all of the actions and efforts undertaken to make right the broken . . . relationships in the world today” (109). He powerfully writes, “Jesus is God’s act of restorative justice” (110); therefore, “we who have been reconciled to God cannot . . . ignore the ministry of reconciliation . . . unmarred by colonial categories of race” (116).

From defining justice, Wytsma proceeds to sketch how the evangelical understanding of salvation has become privatized. Its “truncated doctrines of salvation . . . allow for such inconsistent thought and action, professing love of Jesus while committing gross injustice against our neighbor” (123). Wytsma convincingly shows how an internal, privatized faith can’t allow one to fully live out the golden rule: “Do to others as you would have them do to you” (Matt. 7:12; Luke 6:31).

Wytsma moves to focus on the imago Dei as he reminds Christians that “faith is something we each own personally, but faith is also necessarily bound up in the matrix of God’s covenant family and God’s creation” (131). Because of sin, “we have turned the diversity of peoples into a hierarchy rather than a beautiful picture of people all made in the image of God, reconciled to God and to each other in Christ” (131).

While he explores the positive effects of the gospel, Wytsma could’ve written more on how the new covenant confronts corporate sin passed down from generation to generation. What would it look like for the church to corporately take responsibility for its past and present sin?

Wytsma’s weakest section is part three, where he suggests ways white Christians can seek responsible engagement in the lives of their brothers and sisters of color: listening, learning, lamenting, confessing, and laying down privilege. While these are vital steps, they feel optional and individualistic. Ideally, Wytsma wants the corporate body to take these steps, but because he didn’t address corporate responsibility for corporate sins in part two, he weakens his case.

Despite its shortcomings, The Myth of Equality should be essential reading for every American evangelical Christian. It gives the reader a historical context to understand the world today, as well as a biblical understanding of why justice, love, and racial equality aren’t optional in the kingdom of God.

Jessica Hong received her MDiv at Westminster Theological Seminary in Glenside, Pennsylvania, and was a former community group director at Redeemer Presbyterian Church in New York City. She assists with social media for The Gospel Coalition.

Chris McNerney is a church-planting apprentice at Gracepoint Church in Philadelphia. He is currently in the MDiv program at Westminster Theological Seminary. He is half-Puerto Rican and half-Italian.