This year marks the 50th anniversary of Betty Friedan’s The Feminine Mystique. Friedan, a freelance writer for women’s magazines and a suburban housewife, wrote for a generation of post-World War II women she claimed had bought into the image of the “feminine mystique” and, as a result, suffered from the “problem that has no name.” This mystique, reinforced by magazines, advertisements, and popular culture, was “the suburban housewife—the dream image of the young American woman . . . healthy, beautiful, educated, concerned only about her husband, her children, her home.” Friedan argued that this image promised true feminine fulfillment.

Although the context of a white, suburban, middle-class housewife is somewhat distant from mine—I’m a millennial (born between the 1980s and 2004), second-generation Korean American female born in Flushing, New York—I can see why Friedan’s work produced such gut-wrenching, polarizing responses. I suppose it also helps that I recently read Sheryl Sandberg’s Lean In: Women, Work and the Will to Lead and could hardly put it down since I felt she was speaking into my situation as a struggling working woman today. Her personal anecdotes of injustices at work for women only brought back my own memories of the prejudice I’ve experienced being a woman in ministry. After reading Sandberg’s book I finally “got” what made The Feminine Mystique the seminal work in igniting the modern feminist movement in America.

It was 1957 when Friedan sent a survey to 200 of her former Smith College classmates prior to their 15th-anniversary reunion. She realized there was a discrepancy between the reality of their lives and the feminine mystique image to which they tried to conform. This discrepancy boiled down to one question for the American, middle-class, suburban housewife: Is this all? 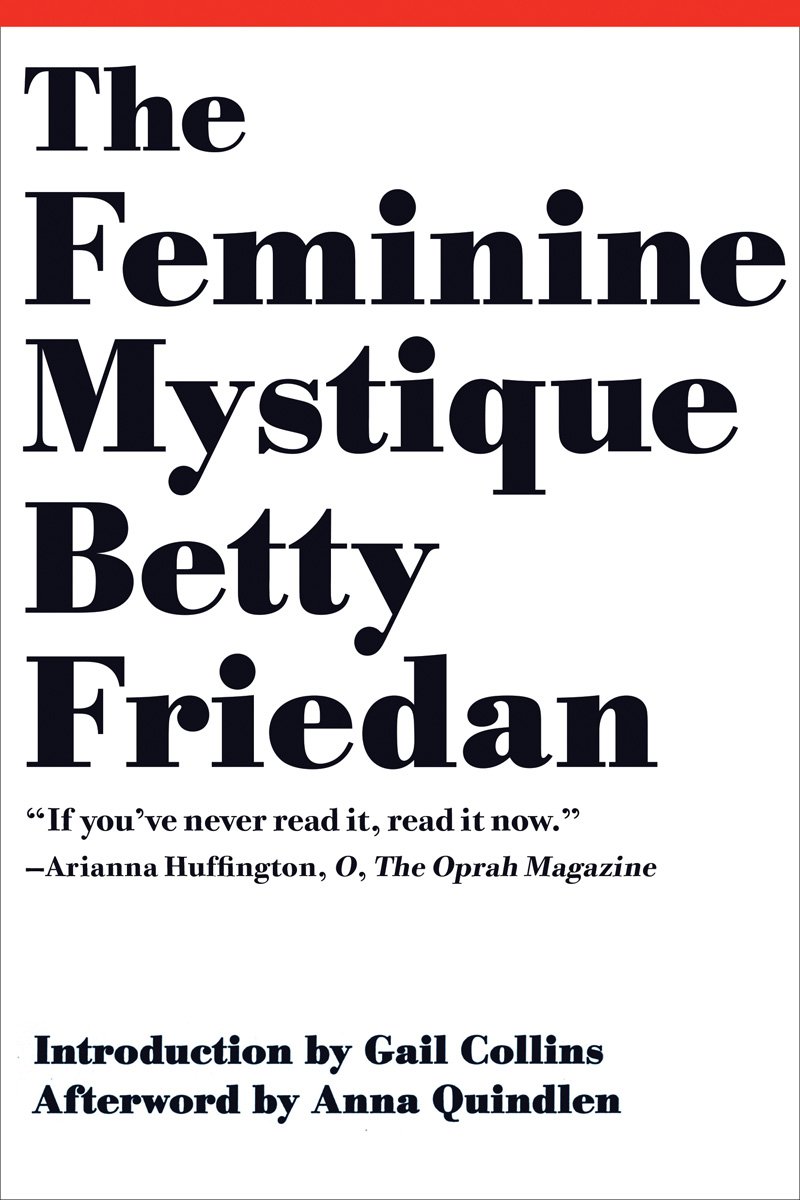 Although Friedan titled the issue American women were experiencing “the problem that had no name,” she did, in fact, name it (though it’s quite easy to overlook since you have to comb through personal anecdotes, interviews, and analyses of media, social scientists, and education). “The problem that has no name” is actually the problem of identity. “It is my thesis,” Friedan wrote, “that the core of the problem for women today is not sexual but a problem of identity—a stunting or evasion of growth that is perpetuated by the feminine mystique.”

From Friedan’s perspective, accepting the feminine mystique as one’s identity and subsequently trying to live out of that identity caused a disparity between reality and conformity. Thus, her book ultimately functioned as a call to the American suburban housewife to radically shift her identity from housewife and mother to something more meaningful and purposeful. Her chapter titled “The Forfeited Self” provides “the cure” to this identity crisis: the existential worldview. To go from being dehumanized back to being human, Friedan argued that a woman must fulfill herself and become what she can be; in other words, a woman has to “transcend the present and act in light of the possible” in order to come to a point of self-actualization. Friedan argued the routineness and “dailyness” of being a housewife, living through husbands and children and only wanting to be loved and secure and accepted by others, was the roadblock to women becoming all they could be.

What exactly would it look like for women to self-actualize and be fully human? If not motherhood and marriage, where should they find their identity? Friedan writes, “Women, as well as men, can only find their identity in work that uses their full capacities” and contributes to society. Thus, she concludes, housework is not a career.

I think Friedan rightly assessed that women in her day had bought into an identity that couldn’t fulfill them. It’s not surprising that finding worth, value, and identity in a husband and children leave women empty and unfulfilled. Although that’s part of what we were created for, we were first created in God’s image, to have a relationship with him before venturing into relationships with anyone else.

The existential worldview isn’t the answer to feeling fully human. Being created in the image of God is what makes one fully human. Nevertheless, in our state of fallenness apart from Christ, there is a dehumanizing tendency within each of us. I think of Nebuchadnezzar (Dan. 4), who in his arrogance saw his kingdom built by his own power and for his own glory and refused to give credit to the Most High God. He was then driven from among men to eat grass like an ox and wander—his body wet with dew, his hair as long as eagles’ feathers, and his nails like birds’ claws. This is clear imagery of dehumanization. Not until Nebuchadnezzar humbled himself and acknowledged the kingship of God was he restored to his humanity.

Understanding we are created in the image of God and renewed in our humanity through Christ’s life, death, and resurrection has profound implications for our identity. We no longer have to look at our “roles” in life—what we do and how we perform—as the defining markers of our identity. We no longer need status, money, positions of power, or esteem from others to determine our worth and value. If we seek our identity in what we do, we’ll always want more.

It’s unfortunate many believed Friedan’s solution. Shifting from the role of mother and housewife to another identity not found in Christ will inevitably put us in another courtroom where we will wait for a verdict that “we’ve made it” or “we’re good enough.” As Tim Keller writes in The Freedom of Self Forgetfulness, “What Paul is looking for, what Madonna is looking for, what we are all looking for, is an ultimate verdict that we are important and valuable.” In Christ, we receive the ultimate verdict and are taken out of the courtroom, never again needing to hear from others or ourselves that “we’ve made it.”

Fifty years later, women have attained positions in their career that would have been unimaginable in Friedan’s day. I imagine Sandberg’s book wouldn’t exist were it not for the groundwork laid by Friedan and others after her. I imagine I wouldn’t have received my Master of Divinity at a conservative evangelical seminary, nor other countless opportunities I take for granted, had it not been for the questions Friedan’s book raised. Yet the identity crisis persists in women today as it did back then: different circumstances, same problem. As I finished Sandberg’s book, I was prompted by the Holy Spirit and a good mentor to take the anger I was feeling, which quickly could have turned to bitterness, and to repent before the Lord for holding onto memories that would be fuel for resentment and bitterness toward men.

Men are not the answer, but they’re not the problem, either. My own brokenness, which keeps me from finding the fullness of my identity in who I am in Christ, is the real problem. In Christ, any role can be carried out with joy and neither anxiety on the one hand nor resentment on the other.

Jessica Hong received her MDiv at Westminster Theological Seminary in Glenside, Pennsylvania, and was a former community group director at Redeemer Presbyterian Church in New York City. She assists with social media for The Gospel Coalition.