The “arts and theology” subgenre of evangelical discourse is livelier than ever before. There are countless blogs, journals, books, conferences, and university programs devoted to exploring the intersection of faith, creativity, and the arts. Since I started publishing film reviews in Christian magazines some 15 years ago, I’ve been encouraged by much of what I see. But I’ve also been concerned over some of the movement’s tendencies.

I’ve seen many in my generation overcorrect from legalistic faith environments that were hostile, or at best apathetic, toward the arts. Desperately seeking to shed evangelicalism’s legalistic and inartistic reputation, many—myself included—have at times swung the pendulum to the other extreme, engaging the arts with an uncritical, “everything-is-awesome!” enthusiasm that is, in the end, just as simplistic as the legalism we wanted to lose.

I’ve witnessed how often arts-theology discourse is much more robust on the arts side than the theology side. Many in this conversation exhibit either a low theological literacy or a depressing disinterest in Scripture, employing it where convenient (“the Old Testament was R-rated, so let’s not be prudes”) or leaving it out altogether. At times the connections between Christianity and some piece of art—a Banksy stunt, perhaps, or a Batman film—are so much of a stretch that it raises the question of why we should even bother. Indeed, unless Christian engagement with the arts is more rigorously rooted in Christian theology from the outset, rather than a sanctifying afterthought, we shouldn’t expect the conversation to advance beyond the superficial categories (“positive values,” “uplifting,” “redemptive,” “Christ figure”) that have long been mainstays of the discourse.

Jeremy Begbie, a noted pianist and professor of theology at Duke Divinity School, has similar concerns. In his new book, A Peculiar Orthodoxy: Reflections on Theology and the Arts, Begbie laments that too little in the arts-theology conversation draws on Scripture or finds inspiration in biblical orthodoxy. Begbie says it is the “stubborn peculiarity of biblically based orthodoxy—centering on the embodiment of the world’s Creator in a crucified king, and a God who is perplexingly threefold—that seems to be all too easily screened out or sanitized by those exploring the resonances between faith and the arts today” (vi–vii).

In A Peculiar Orthodoxy, Begbie models—in a diverse array of standalone essays—the sort of direct, unembarrassed engagement with this “peculiar orthodoxy” that is lacking in much theological writing about the arts. But what exactly does this look like? 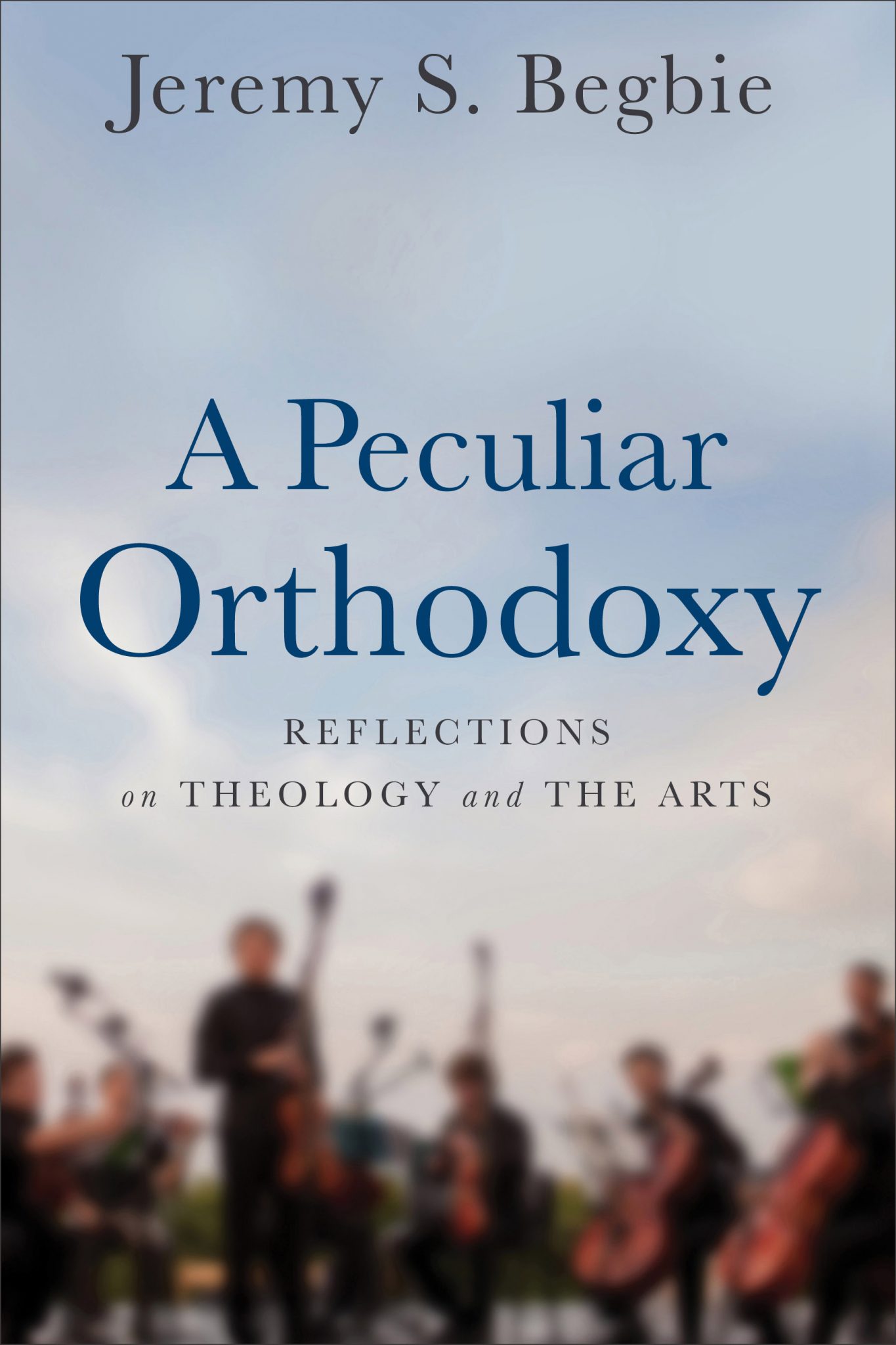 A Peculiar Orthodoxy: Reflections on Theology and the Arts

A Peculiar Orthodoxy: Reflections on Theology and the Arts

World-renowned theologian Jeremy Begbie has been at the forefront of teaching and writing on theology and the arts for more than twenty years. Amid current debates and discussions on the topic, Begbie emphasizes the role of a biblically grounded creedal orthodoxy as he shows how Christian theology and the arts can enrich each other.

For one, it looks like moving from abstract vagaries to concrete specificity when Christians talk about “spirituality” and “beauty” in the arts.

“A Christian account of beauty,” Begbie writes, “will be oriented to a particular God . . . not an undifferentiated monad or blank ‘Presence’ but a triunity of inexhaustible love and life, active and present to the world as triune and never more intensely than in the saving life, death, and resurrection of Jesus Christ” (3).

A Christian vision for the arts should be more robustly Christological and trinitarian, Begbie suggests. It should see in the risen and ascended Christ the culmination of creation’s beauty. It should be “charged with promise” in its orientation around Holy Spirit, recognizing how the beauty we apprehend now is “a Spirit-given foretaste of the beauty to be given” (10).

A Christian vision for the arts should be more robustly Christological and trinitarian.

Far from limiting the potential of engaging beauty and art from a Christian perspective, the trinitarian orientation opens up possibilities and gives more precise language and coherent rubrics for grappling with beauty, Begbie’s book shows. Among other things, a Trinity-shaped aesthetic delights in a “diversity of particulars” and the lavish, unpredictable, uncontainable abundance of love that we see in intratrinitarian life.

It’s refreshing to see Begbie—a towering figure in the arts-and-theology world—not only call out the laziness of so much Christian writing about the arts but also elegantly model the alternative: rigorously Christocentric conversations between art and theology, in a way that enhances both.

Chapter 8 (“Room of One’s Own”) models this approach particularly well. Begbie skillfully demonstrates how a tricky theological concept like the compatibility of divine and human freedom can be uniquely illuminated through the arts, in this case music. Sonic space is a perceptual field different from visual space, and it’s a difference that can shed helpful light on certain theological quandaries. I love how much Begbie attends to form. He respects the distinctive theological capacities and limitations of various genres and mediums of art, not only in what they say but also in how they say it.

Too much in the arts-theology conversation treats the arts merely as packaging of content, where the message is the primary level at which theology is engaged (“Does a character function as a Christ figure? Does the plot have redemptive qualities? Is a gospel to be found?”). Too little attention is paid to the medium itself. How do the unique stylistic capacities of certain forms bear witness to theological truth? In my own writing about films I have challenged myself to pay closer attention to this question, pondering the possibilities of a Christocentric aesthetic of cinema.

Though the writing is academic and at times difficult to follow (particularly for those of us with little training in music), A Peculiar Orthodoxy has much to offer anyone interested in the arts and theology.

Christians need to make and interpret the arts in a way that echoes both the darkness of crucifixion and also the joy of resurrection.

Among the standout essays is Chapter 2, which addresses the problem of sentimentality in Christian art-making (think Thomas Kinkade or the Fireproof-type Christian movies). Building on his Christocentric focus, Begbie suggests sentimentalism is properly countered only by an appropriate attention to the Son’s journey from crucifixion to resurrection in Good Friday, Holy Saturday, and Easter Sunday. Christian sentimentalism in art, Begbie rightly suggests, often stems from “a premature grasp for Easter morning, a refusal to follow the three days of Easter as three days in an irreversible sequence of victory over evil” (41).

This framework is a helpful antidote not only to the saccharine, cheaply cheery tendences of “skip-to-Easter!” evangelical art-making, but also to the other extreme that I see often among younger evangelical artists: a “wallow-in-Good-Friday” disposition that fetishizes brokenness and suffering, as if Easter didn’t exist. Christians need to make and interpret the arts in a way that echoes both the darkness of crucifixion and also the joy of resurrection, as well as the “already but not yet” tensions and longings of Holy Saturday.

What the Reformed Tradition Offers

The book’s final essay is a fascinating and somewhat surprising case for why the Reformed tradition—often caricatured as being suspicious of the arts and apathetic about beauty—is actually well positioned to move the arts-theology conversation in a more theologically grounded and fruitful direction.

With its focus on the Word and understanding that human language is “irreplaceably intrinsic” to God’s self-revelation (205), the Reformed tradition brings necessary focus to the free-for-all tendencies of some who position the arts theologically as an alternative to or escape from the confines of language. As Begbie argues throughout the book, God’s self-disclosure through Scripture and the incarnation (the Word made flesh) bring an unavoidable specificity that is sidelined at our peril.

For too many bored or otherwise restless and relevance-seeking evangelicals, fidelity to the arts has overtaken fidelity to Scripture, with the latter deployed as theological cover when convenient, but often not at all. We can do better.

But we must also recognize, Begbie argues, that “the God who appropriates human language directly into his purposes is the God of gracious freedom, who exceeds all that can be spoken or thought, all that can be said or conceived” (206). This is where we need balance: recognizing that faithfulness to the realities of God’s revelation must be central and foremost, but that such fidelity need not be threatened by the nonverbal arts, which have unique capacities to mediate these realities:

The arts do their own kind of work in their own kind of way, articulating depths of the Word of the gospel and our experience of it that are otherwise unheard or unfelt, while nonetheless being responsible and faithful to the normative texts of the faith. A major research agenda opens up here, as well as a major practical challenge to all who care about the arts in the church. (207–8)

This is a worthy challenge indeed. The arts can lead us astray when untethered from theological orthodoxy and the “normative texts of the faith.” For too many bored or otherwise restless and relevance-seeking evangelicals, fidelity to the arts has overtaken fidelity to Scripture, with the latter deployed as theological cover when convenient, but often not at all. We can do better.

A fierce devotion to Scripture and a groundedness in the “peculiar orthodoxy” of trinitarian Christian faith should be the starting place in our art-making and art-appreciating, not a dubious add-on to justify any and every TV show, movie, or musical work we love. This proper orientation will not stifle or simplify our experience of art. It will enhance it, placing it within the glorious, illuminating frame of the ultimate referent for beauty: the triune God.