Editors’ Note: As noted in our recent interview with authors Peter Gentry and Stephen Wellum, Kingdom through Covenant: A Biblical-Theological Understanding of the Covenants (Crossway, 2012) is a groundbreaking contribution to any discussion about the intersection of exegesis, biblical theology, and systematic theology. In 848 pages, Gentry and Wellum have made a substantial case for an independent middle path between dispensational and covenant theology—a case that demands a response.

Recognizing the imperative need (among evangelicals in particular) to serve the church (not the academy) by helping believers understand the Bible (not merely the Old Testament or the New Testament or Paul or Isaiah or Malachi 1), a number of scholars have recently undertaken the daunting task of writing “whole Bible” biblical theologies (e.g., Charles Scobie, Greg Beale). Kingdom through Covenant doesn’t quite fit into this genre since it is purposely selective in the topics it treats. What Peter Gentry and Stephen Wellum do attempt, however, is to erect the scaffolding needed to guide the reader through the storyline of the Bible. That scaffolding is made up of six successive biblical covenants—with Adam/creation, Noah, Abraham, the Israelites, David, and the church (a covenant with the Levites is mentioned briefly but plays no role in the book). “Through” (explained as meaning both “by means of” and “in the succession of”) the covenants, God works to establish his kingdom, his glorious reign over all of creation.

In accordance with their claim that “biblical theology” must work with the categories Scripture provides, Gentry and Wellum assert that the Bible itself reveals that “covenant” is the key structuring element in the Bible. And this should be no surprise, since “covenant is intrinsic to the being of God himself” (164). At the heart of “covenant” is a relationship (which covenant regulates but does not create) characterized by “faithfulness and loyalty in love” (141). 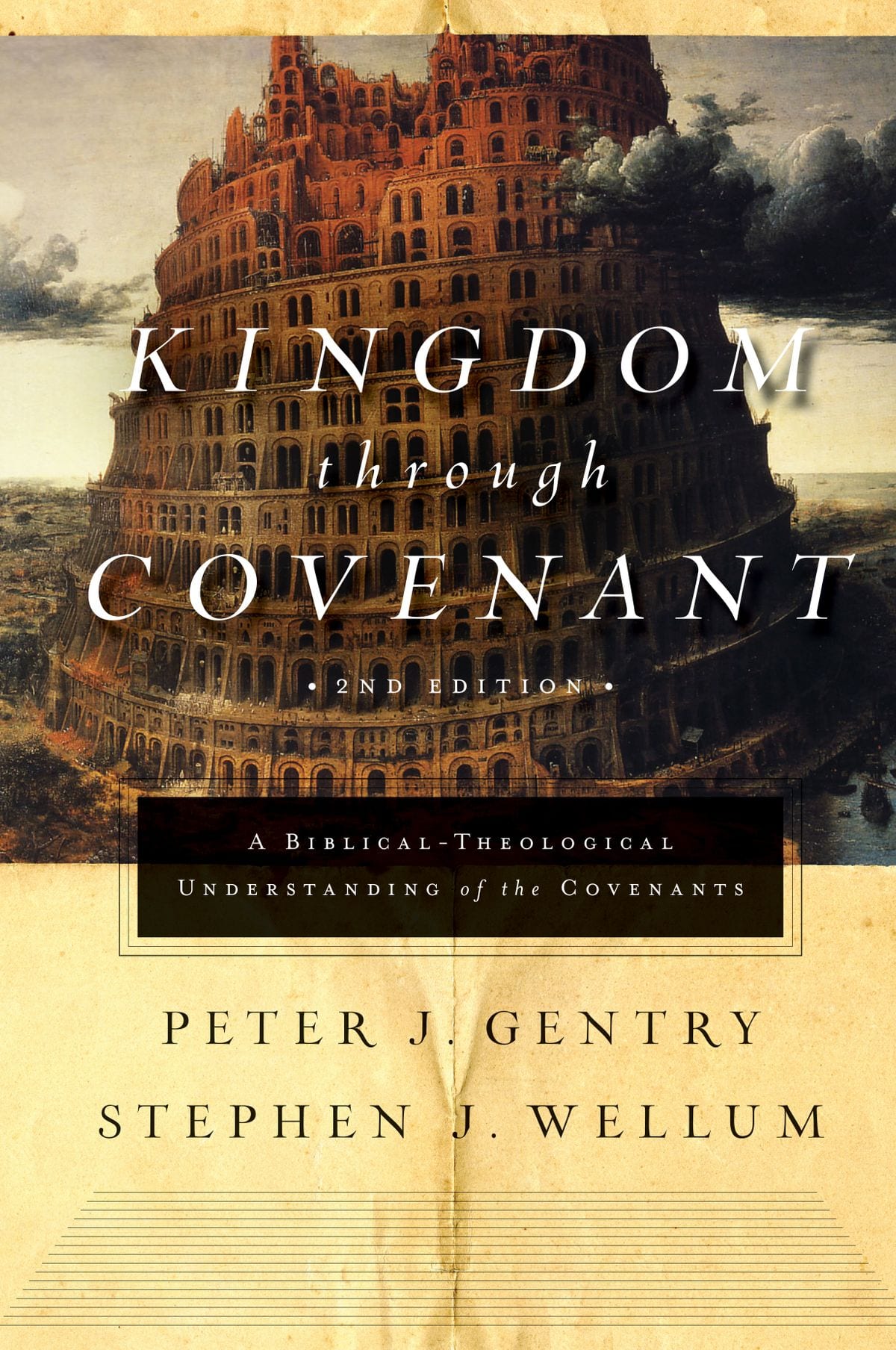 Kingdom through Covenant: A Biblical-Theological Understanding of the Covenants

Kingdom through Covenant: A Biblical-Theological Understanding of the Covenants

By incorporating the latest available research from the ancient Near East and examining implications of their work for Christology, ecclesiology, eschatology, and hermeneutics―Biblical scholar Peter Gentry and systematic theologian Stephen Wellum present a thoughtful and viable alternative to both covenant theology and dispensationalism.

One of the book’s more controversial claims is that the biblical covenants are a mixture of the traditional “suzerain-vassal” and “royal grant” treaty types identified in the Ancient Near Eastern world, and that they are therefore both unconditional (God guarantees their fulfillment) and conditional (their fulfillment depends on a faithful and obedient covenant partner). I think Gentry and Wellum are probably right on this latter point, both because they offer compelling biblical evidence for the point and because this twofold dimension of covenant matches a basic tension between divine sovereignty and human responsibility that runs right through the Bible. I am not so sure that “covenant” is the structuring element of the biblical story, although the authors make a good case for it.

Gentry and Wellum set their work in the context of the continuing debate between “covenant theology” on the one hand and “dispensationalism” on the other. An early chapter describes each movement (appropriately recognizing the various iterations of each general approach) and offers brief critique. These descriptions, though based on a rather odd and narrow selection of authors, are fair enough. Gentry and Wellum’s reading of the Bible’s covenant structure leads them to reject both of these traditional options in favor of what they call “new covenant theology” or “progressive covenantalism” (24). Neither of the traditional approaches, Gentry and Wellum claim, takes seriously enough the typological nature of Old Testament (OT) realities and their fulfillments in Christ. Specifically, picking up two of the dominant themes in the book, dispensationalists fail to see how the land promise finds its typological counterpart in Christ and the new creation, and covenant theologians don’t recognize that the mixed community of believers and unbelievers that characterizes the old covenant finds its antitype in Christ and in a purely regenerate covenant community (though I don’t understand quite how the typology in this latter case “works”). Critical to the authors’ reading of the covenants is a significant disjunction between the Old Testament covenants and the new covenant. Among other things, this disjunction means that the law (or “instruction,” as the authors prefer to call it) of the Israelite covenant doesn’t directly apply to new covenant Christians. I think Gentry and Wellum are right on this reading of the covenants and the implications for the applicability of the law. But, while it pains me to do so, I must question the argument they use to get to this conclusion.

In an early chapter, the authors contend the OT is “completely consistent” in distinguishing between the language of initiating a covenant (“cutting” a covenant) and reaffirming an existing covenant (“establishing” or “upholding” a covenant) (155). But this claim is not consistently maintained. They argue that Deut. 29:1 (English) presents the Deuteronomic covenant as a “covenant in its own right” (a covenant is “cut”) but that it also “supplements” rather than replaces the Sinai covenant (377–82). Yet when they come to the language about the new covenant in Ezek. 16:60 and 62, which speaks not of “cutting” but of “establishing” a covenant, they admit that the consistent distinction for which they earlier argue doesn’t hold here. One cannot, then, identify the new covenant as one that supersedes all others on the basis of lexicography (contra their claim on p. 512). Nor, in light of their treatment of Deut. 29:1, is it clear that the simple inauguration of a new covenant must mean that all earlier covenants are superseded. The authors may betray an awareness of this possible criticism in the careful language they choose to express the point: the “cutting” of a new covenant “automatically renders the Israelite covenant obsolete as a code or formalized agreement” (512, emphasis mine); “the covenant with Israel as a whole covenant package comes to its end and Christians are no longer under it as a covenant” (635, emphasis original). I’m not sure the qualifications in the language here overcome the logical problems in the argument.

Where Is the NT?

Gentry and Wellum are to be commended for their valiant (and certainly not wholly unsuccessful) attempt to ground a fundamental discontinuity between the new covenant and the older covenants in the OT itself. I applaud the kind of carefully theologically oriented OT interpretation that the volume gives us (although the volume is cluttered with exegesis of detailed points that don’t clearly contribute to the argument—I am unclear, for instance, about why an entire chapter is devoted to Daniel 9:27–29). Yet, at the risk of exposing my own disciplinary prejudice, I’m puzzled at the lack of any sustained exegetical argument for the point from the New Testament (NT). To be sure, the authors appeal to NT texts in the course of their discussion of the OT covenants, but there is little if any exegesis and a distressing lack of recognition of alternative viewpoints and of bibliography. The one sustained NT chapter, on Ephesians 4–6, contributes little to the key argument, while critical NT texts about “covenant” or “law” are only briefly mentioned.

In two concluding chapters, Gentry and Wellum summarize their argument and spell out some of its implications. The authors betray (not unfairly) their own ecclesiastical location by stressing that only those who truly believe belong to the new covenant and that the new covenant sign of baptism should therefore be administered only to (professing) believers. The promise of a land to Abraham and his descendants shows evidence in the OT itself of being bigger and more nuanced than a promise of the particular geography of Canaan—a point the NT makes clear by expanding the promise to include the whole creation. And, echoing an argument Greg Beale makes in his recent New Testament Biblical Theology, the significance of Christ’s active obedience for his work of atonement is supported by viewing Christ as the one who, as both human and divine, becomes the obedient covenant partner for which the OT covenants look in vain. I think each of these points is well-grounded in the larger argument of the book. (I am less certain of the argument for particular atonement, whose relevance to the key argument is not immediately obvious.)

Thanks, Peter and Stephen (if I may), for a book that I read with pleasure and profit. I learned a lot, and I think you are on the right track. If I’m disappointed at some parts of the book that appear to me to be detours from the essential argument and a failure to do genuine “whole Bible” theology by neglecting the NT, I have to admit that I (and any number of collaborators) could probably not do nearly as well as you have done.

Douglas Moo is Wessner Chair of Biblical Studies at Wheaton College and chair of the Committee on Bible Translation. He has written several commentaries on New Testament books and co-authored, along with Don Carson, an introduction to the New Testament.