Judah Smith is the lead pastor of City Church in Seattle, along with his wife, Chelsea. Jesus Is: Finding a New Way to Be Human arose out of his church’s “Jesus is ______” campaign, which was a marketing effort to get people in his city thinking and talking about Jesus (xvi–xvii). The book’s goal is to introduce Jesus for who he really is, apart from our preconceived, stereotyped, or limited understandings of him (199).

With a foreword by golfer Bubba Watson and endorsement from pop singer Justin Bieber, the book certainly reaches a wide audience. It’s encouraging to see a book so exultant in Jesus’ love being read by so many people. I do worry, however, that the book’s overall usefulness is significantly dampened by a few key weaknesses.

It’s best to begin with areas of appreciation and affirmation, and there is much to be appreciated and affirmed about Jesus Is. First, it’s a model of winsome, effective communication. Smith’s language is simple and accessible, and his tone is self-deprecating and warm. Even those who might take issue with some of the book’s theology can learn from the creativity and cultural insight that connects with so many people. Second, Jesus Is has a wonderful concern to reach all different kinds of people with the gospel. A simple urgency animates the book: all people need to hear about Jesus. Smith seems particularly keen to reach out to the unchurched and dechurched among us who may have their guard up against organized religion. Again, those who might disagree with some of Smith’s approach can still learn much from his evangelistic zeal.

Most significantly, Jesus Is helpfully captures something of the beauty and wonder of the gospel of grace. Smith champions grace as the central concept of the Bible (36), demonstrates how the gospel operates differently than natural religion (135) and culture (128), and emphasizes the importance of grace at every stage of the Christian life (43). I especially appreciated how he insists that grace comes to us as the person of Christ himself, not merely as an abstract concept (49–58), as well as how he deconstructs the idea that we need to balance the gospel with a little legalism in order to avoid licentiousness (51, 124). At its best moments, Jesus Is celebrates the kindness, compassion, and mercy of Christ. For this reason, I think people breaking free from legalistic or repressive church backgrounds could especially benefit from it.

There are a few areas where I’m in a different place than Smith theologically. As a result, I tried to read his book with charity, interpreting statements in the best possible light and giving the benefit of the doubt whenever possible. I think it’s important for Christians of different “tribes” to look for the best in each other, because (1) we’re all fundamentally on the same team, (2) we can all learn from one another, and (3) it’s easy to misunderstand one who comes from a different tradition or runs in a different circle. 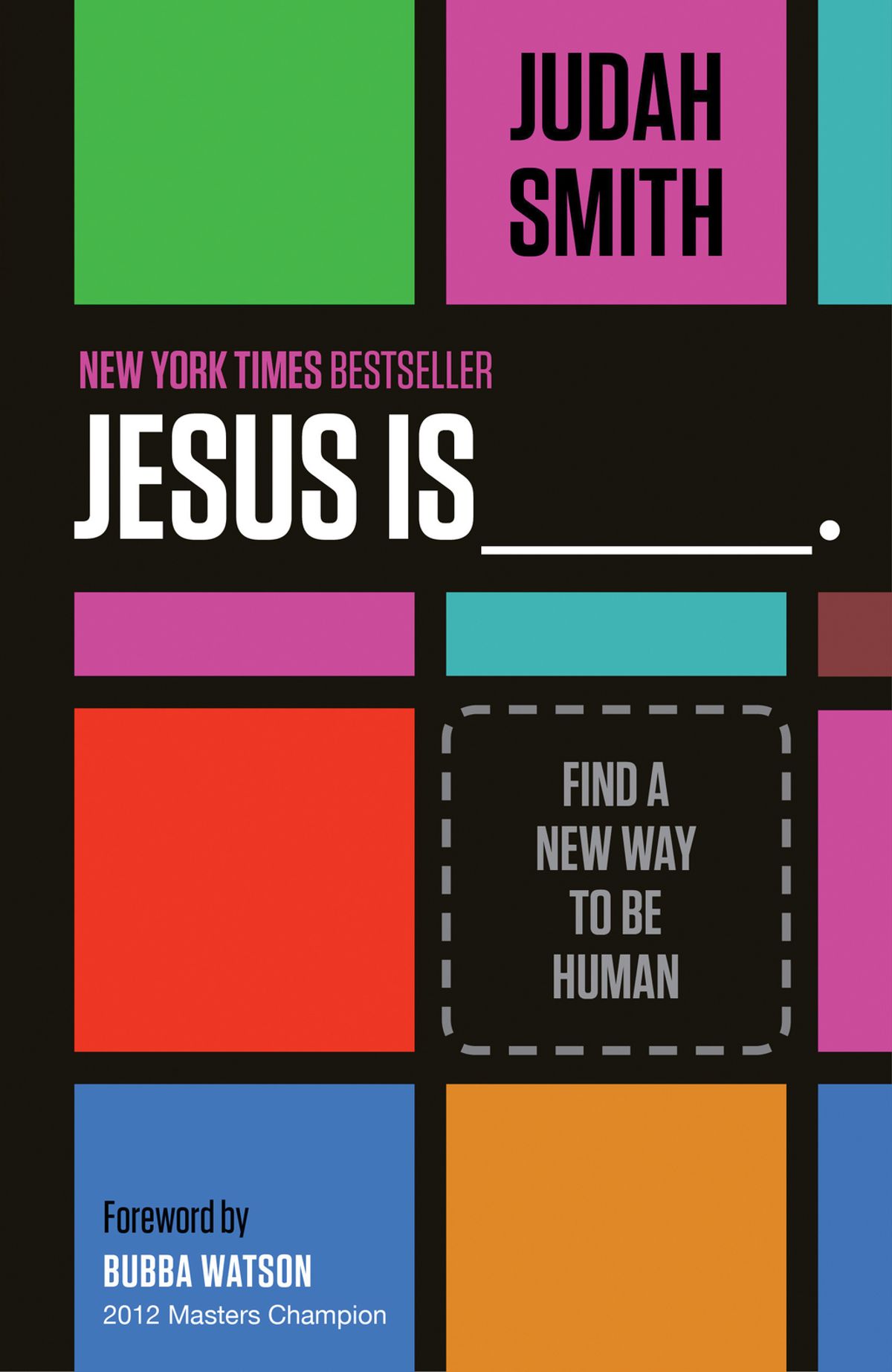 Jesus Is: Find a New Way to Be Human

Jesus Is: Find a New Way to Be Human

As I read through Jesus Is in this way, several passages at first puzzled or surprised me but, after further consideration, seemed to resolve into issues of style, culture, or preference. I was able to conclude, “Okay, I think that is what he means by that” or “I think what he’s trying to do here is this.” When Smith says on page 68 that sin is not a big deal, for example, my alarm bells started ringing. But after reading his further explanation on pages 71–72, I think Smith simply intends to celebrate Christ’s victory over sin and encourage us to focus on him more than on our failures. I still wouldn’t have worded it the same way, but I think I can appreciate his motive here. Another example would be that for much of the book I worried Smith was denying that God ever gets angry—and he did seem to spend little time talking about the cross given the book’s purpose. But then on page 78 Smith affirmed something like propitiation, so I concluded he probably has a working understanding of atonement and divine wrath but simply didn’t draw out these doctrines in detail in this particular book.

Even while trying to read Jesus Is charitably like this, however, a few issues still concerned me.

First, throughout the book there is a consistent dichotomy between knowing Christ and pursuing holiness. The message comes across as “Don’t worry so much about pursuing holiness! That isn’t all that important to God. He just wants relationship with you.” For example:

Being a Christian is not about being good. It’s about relationship. About grace. About Jesus. (96)

God doesn’t want us to make life about our amateur efforts at holiness. He wants us to enjoy life. (136)

I share Smith’s passion for grace over legalism. However, I believe these kinds of statements may open the door (especially for uncritical and/or theologically untrained readers) to replace legalism, not with the gospel, but with licentiousness. The tone of the New Testament is not “You are justified, so don’t worry about fighting for holiness!” but rather “You are justified, so how could you live in sin anymore?” Pursuing relationship with Christ isn’t at odds with pursuing righteousness in daily life; in fact, it’s impossible to have one without the other. That’s why Jesus said, “If you love me, you will keep my commandments” (John 14:15).

While sin cannot alter believers’ status as God’s beloved children, it can still displease Christ and damage our fellowship and intimacy with him (2 Sam. 11:27, Rev. 2:4–5). Sin in the life of a Christian can also quench or grieve the Holy Spirit (1 Thess. 5:19, Eph. 4:30), give Satan a foothold (Eph. 4:27), destroy Christian community (Gal. 5:15), and dishonor the name of Jesus (Titus 2:5). John Owen used to speak of Christians who “decay in grace.” It’s entirely possible for regenerate Christians—who stand justified before the Father—to be lazy, unfruitful, and backslidden. Striving after righteousness, then, isn’t necessarily legalistic; it’s the command of Scripture (2 Tim. 2:22), the fruit of the gospel (Rom. 3:31), and the condition for seeing the Lord (Heb. 12:14).

Jesus Is Not ‘Nice’

Second, I worry this book portrays Jesus as too “nice.” For example, in his laudable effort to express the tenderness and intensity of Christ’s love for believers, Smith sometimes uses sentimental and mushy language. At one point he asserts, “Jesus is crazy about you. He is obsessed with you. He is proud of you” (78). Later he remarks that “Jesus is head-over-heels in love with you” and calls him “your biggest fan” (156). I fear this kind of language, combined with the book’s lack of emphasis on Jesus’ authority and lordship, could give readers the impression that Jesus is never anything other than kind and gentle. He is there to be our buddy and to bless us and to cheer us on—but he doesn’t seem to be the kind of person who would ever reprove or rebuke, chide or chastise, discipline or damn.

Consider the book’s section titles: (1) Jesus Is Your Friend; (2) Jesus Is Grace; (3) Jesus Is the Point; (4) Jesus Is Happy; (5) Jesus Is Here; and (6) Jesus Is Alive. Smith does affirm Christ’s deity (110) and sovereignty (155) in passing, but his interest is so weighted toward Jesus’ friendly qualities that I think the overall portrait is skewed. Jesus isn’t merely a merciful Savior; he’s also a ruling King. He isn’t merely to be loved and appreciated; he’s also to be worshiped and fearfully obeyed. He isn’t merely grace; he’s also the glory and grandeur of God himself.

Overall, Jesus Is captures aspects of Christ’s character but falls short of yielding a reliable, rounded portrait of who he is. When John saw Jesus in Revelation 1, he didn’t say “Aw shucks” because Jesus loves him. He fell on his face as though dead (1:17). When Jesus addresses the churches in Revelation 2–3, he includes not only heart-melting compassion for faithful believers but also stern rebukes and threats of judgment for the wicked and unrepentant (e.g., his killing  Jezebel’s children in 2:23–24). When Jesus returns at the end of Revelation, he has a sword coming out of his mouth with which to strike down and rule the nations (19:15). This kingly authority, this fearful majesty—captured so vividly in Revelation while also present throughout the rest of Scripture—is part of the biblical answer to Smith’s sentence: “Jesus is_______.” And it makes Jesus’s kindness toward those who trust in him all the more amazing.