When we pick up the Old Testament, we know intuitively its 39 books aren’t one and the same. This means the rules for reading one section may be different than the rules for reading another. To help Christians understand the various rules, Peter J. Gentry—professor of Old Testament interpretation at The Southern Baptist Theological Seminary and director of the Hexapla Institute—has written a short introduction, How to Read and Understand the Biblical Prophets.

Gentry laments that Christians tend to approach the prophetic books like they do Romans. Hence, “the lack of a proper reading strategy is exactly the problem some have with reading the Bible” (13). Gentry’s task is to give us principles we can employ to help us understand the literature of the prophets. He does this by laying out seven characteristics of prophetic literature in the Bible.

Lest one think Gentry has written a “how to” manual as the title suggests, the book is mostly an extended discussion of several features of the prophets. The emphasis is on how to understand the prophets, which leads naturally to a strategy for how to read them. Gentry lists his general principles for understanding prophecy by focusing on examples from the book of Isaiah. There are a couple of exceptions, mostly from Daniel and Jeremiah near the end of the work, but his emphasis is Isaiah.

In the early chapters, Gentry gives a lengthy explanation of the meaning and structure of Isaiah 5–6, illustrating the fundamentals for reading the prophetic literature. The first principle is that prophets are calling the Israelites back to the covenant: “Everything in the prophets is based on the covenant made between God and Israel” (15). 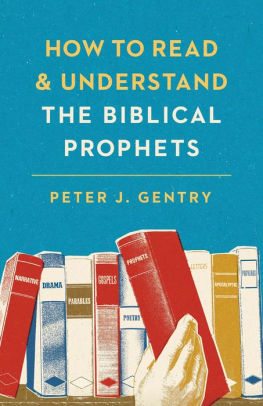 Second, unlike modern linear prose, “the normal pattern of Hebrew literature is to consider topics in a recursive manner, which means that a topic is progressively repeated” (16–17). Addressing this issue at the front of the book is helpful, since it clears up a big problem modern Christians readers face: Why do the prophets seem to be repeating themselves over and over?

In chapter three, Gentry returns to this question, encouraging the reader to think of this recursive approach not as boring repetition, but like a three-dimensional object. Each repetition develops the topic from a different angle or point of view (42). Noticing the recursive patterns in the literary structure of a text, then, is “fundamental to interpretation” (18).

Gentry illustrates this with the example of chiasm. The chiasm in Hebrew literature occurs when an author communicates a number of ideas and then repeats each in reverse order, resulting in an A B C :: C’ B’ A’ pattern, often to highlight the material in the center. To read the biblical prophets rightly, we must understand the words themselves along with their literary structure.

Third, Gentry devotes a considerable amount of space to how the prophets describe the future, and rightly so. Most Bible readers probably equate biblical “prophecy” with “prediction,” a false notion Gentry quickly dispels. There’s still a fair amount of prediction in the biblical prophets, though, where the prophet hears and sees divine decisions yet to come concerning nations and individuals. We think of the Messiah, naturally, but also of Babylon or Cyrus.

Interestingly, Gentry explains, “The prophet does not necessarily understand all that he is reporting” (72). The prophet uncovers the distant future as if painting in broad strokes on a panoramic canvas, in which “the near and distant futures of his vision are set side by side” (72). This illustration is helpful, for it shows we must understand Isaiah, Daniel, and Zechariah in their contemporary contexts as well as future ones. Thus one can’t expect to read the prophetic literature in a literal manner, which would negate this point. As Gentry writes, “The debate between literal interpretation and spiritual interpretation is entirely bogus” (124).

Rather, the meaning of the prophet is “determined by the rules of the particular genre or kind of literature” (85). Readers must discern the genre used by the prophet, and then use that genre’s rules to discern his intended meaning, whether through typology (75–91), chiastic arrangements, future predictions (93–97), or apocalypse (97–115).

Finally, Gentry uses Jeremiah 4 to show how creation language describes a future re-creation of God’s people. This is followed by an extended explanation of the book of Daniel, especially regarding Daniel’s visions of the future, and focusing on the rules of apocalyptic language. The final chapter—on the “already and not yet” aspect of biblical prophecy—also engages briefly with the New Testament use of the Old, followed by an appendix on the literary structure of the book of Revelation. A note on the kingdom of God in biblical prophecy is curiously absent in this section.

While the layperson may still need a commentary to notice some of the patterns in the biblical prophets (especially like chiasm), Gentry provides solid ground from which to build that knowledge. I found How to Read and Understand the Biblical Prophets insightful and often illuminating, even if Gentry is guilty at times of losing sight of his audience. Several times, Gentry will note the technical studies (or his years of scholarship) that he uses to analyze a structure, although these notes seem outside the bounds of a book of this type, e.g., “The following division is based on analyzing Hebrew poetry in the manner described by M. P. O’Connor and also by the linguistic science of discourse grammar” (60).

Does Gentry expect the layperson to use the same tools and scientific approach to “read and understand the biblical prophets”? I hope not! He also exposits nearly every biblical text cited, so the reader is sometimes lost in the details searching for the main point. This problem is easily remedied by looking over the introductory paragraphs of each chapter.

One confusing feature in an otherwise helpful book is Gentry’s emphasis on Isaiah. For example, chapter two describes the differences between writing and non-writing prophets, but is filled with examples only from Isaiah. Chapter three is about the function of repetition in Hebrew prophecy, but samples of chiasms are all taken from Isaiah, which leaves the reader wondering if other prophets do the same. Is Isaiah the archetype, or just one of many? Can we conclude from Isaiah alone that all other prophets write in a similar manner?

Chapter four addresses a particularly knotty problem in biblical studies: the oracles’ purposes against foreign nations. This chapter is helpful but only insofar as the reader is satisfied that the principles for understanding Isaiah’s oracles can be applied to the other prophets too. Further, Gentry’s description of new exodus typology in chapter five is focused solely on Isaiah. Is he implying that the examples from Isaiah illustrate universal points? It’s difficult to tell.

I don’t think Gentry errs in using Isaiah almost exclusively, however. Isaiah isn’t the only biblical prophet, nor the most important one (if that’s even possible to determine), but he is influential. It’s clear Gentry believes nearly every major feature in biblical prophecy has been employed in Isaiah, hence his reliance on it for all his illustrations. I simply think he needs to add one paragraph to his introduction, stating that since Isaiah is one of the largest books in the Old Testament and perhaps the most influential on later biblical authors, he intends to use it as the main source of illustration.

In the final analysis, I’m encouraged that Gentry’s helpful insights on the prophetic literature are now in print. The book is geared toward a popular audience and is a good, quick resource for getting a grasp on a genre that takes up a large chunk of our Bibles.

Josh Philpot is the pastor for worship at Founders Baptist Church in Houston. He holds a PhD in Old Testament from The Southern Baptist Theological Seminary.