Douglas Brouwer loves his multicultural church so much he wrote a memoir, How to Become a Multicultural Church, that delights in its ups, downs, joys, and challenges. After serving white American churches for 30 years, Brouwer came to International Protestant Church (IPC) in Zurich, Switzerland, a diverse congregation filled with a mix of internationals and locals. The book chronicles his personal journey into multicultural ministry. 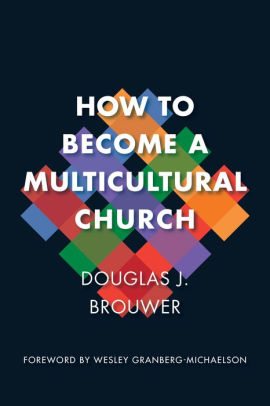 How to Become a Multicultural Church

How to Become a Multicultural Church

It must also be said that Brouwer is white, and he writes from a white perspective. Many principles will be helpful for all, but this book may be especially helpful for whites who aren’t convinced of multiculturalism’s value. Hopefully this book will create an increased hunger for the multicultural church in all its readers.

Brouwer believes many churches don’t really want diversity. It has been his experience that churches in the States are reluctantly becoming diverse. The country itself is becoming more diverse: “According to the Pew Research Center, the U.S. is approaching a kind of multicultural tipping point within the next few years, so that whites will no longer constitute the majority” (5). Researchers guess that this will take place around the year 2050. Brouwer’s point is that change is coming whether you like it or not—and a lot of churches don’t like it.

Many churches prefer their monocultural experience and don’t want to change. Yet change is coming.

Why should a church want diversity? Brouwer explains that our motivation must be theological. He argues that the Bible’s storyline—from Babel (Gen. 11) to Pentecost (Acts 2)—insists that we must strive for diversity.

Multiculturalism shouldn’t be accepted, but rather sought after. Multicultural churches aren’t, therefore, a mere mix of different ethnicities; they truly embrace various cultures.

The book defines a multicultural church as a church in which each cultural group will “to some degree engage and embody [their] cultural norms,” rather than everyone assimilating to the culture of the dominant group (6). While this sounds appealing, multicultural ministry comes with challenges.

Ups and Downs of Multicultural Ministry

As a pastor of a multicultural church, I nodded in agreement throughout much of the book. I appreciate Brouwer’s candid storytelling and honesty. He doesn’t gloss over the difficulties, and he squelches any romantic notions about multicultural ministry. At IPC he discovers that, though his members crave multicultural experiences, they seek out and meet up in monocultural groups. They desire diversity on the one hand, yet crave similarity and familiarity on the other.

As a white American, Brouwer also addresses his own superiority complex and the problem of subtle stereotyping. His readiness to talk about and repent for times he offended other cultures is encouraging and convicting. For example, he wrote a blog while ministering in Switzerland. Over time, he realized he was writing about the Swiss to Americans. He wasn’t writing to or for the people in his church. Many white Americans launching into multicultural work will fall into the trap of writing to highlight our work to outsiders, talking about those with whom we live, all the while ignoring how our new context may perceive our writings.

Brouwer’s thoughts on leadership, cultural misunderstanding, and patience are worth the price of the book. His own leadership failed many Swiss cultural expectations. He became defensive of his own culture when he felt misunderstood. He needed to learn patience as he worked through these inevtiable misunderstandings with his church. He provides a breakdown of the various “stages” one goes through in a multicultural environment that will help prepare others for the experience.

The book’s greatest strength, however, is this: In spite of the challenges, Brouwer has come to truly recognize the value of other cultures. As white Americans often come with answers, not with a willingness to learn, we must take heed. To succeed in multicultural ministry you must learn that you don’t have it all figured out, and that other cultures have something to teach you. “What’s required isn’t suspicion,” he writes, “but openness, a willingness to see others as God sees them” (164).

While the book is fun to read and spot-on in many ways, Brouwer’s argument that multicultural churches must hold their doctrines loosely concerns me deeply. He appeals to Brian McLaren, arguing that multicultural churches must embrace a generous orthodoxy; they must be openhanded on all issues. A few examples are baptism, gender roles in the church, and whether a practicing homosexual can become a church member.

In addition to theological ambiguity, some of Brouwer’s arguments feel a bit nebulous (such as an entire chapter meditating on church names). At times his main point is lost in the weeds.

While I have a few serious concerns with Brouwer’s approach, it’s a book worth reading. Brouwer is an honest pastor stumbling along the multicultural ministry road and discovering every step of the journey is worth it. As he closes, he writes:

Being a pastor is not like being a house painter. There isn’t much to admire at the end of the day. Even on the best days, I wonder if there is anything I can point to . . . but then, on communion Sundays, I see it. (171)

Joel Kurz is the lead pastor of The Garden Church, a multicultural congregation in Baltimore, Maryland. You can find him on Twitter.