This year, Protestants the world over are celebrating the 500th anniversary of Martin Luther’s Ninety-Five Theses, often considered the symbolic beginning of the Reformation. But not everyone is celebrating. A spate of books by Roman Catholic scholars hold Luther and other reformers responsible for the Enlightenment, secularization, an anthropocentric understanding of salvation, and old-fashioned religious bigotry. Even some Protestants are almost apologetic about the Reformation, lamenting the fragmentation of the church and longing for the end of Protestantism.

Luder Whitlock Jr. is an unapologetic Protestant. He’s an evangelical Presbyterian, but first and foremost he’s a follower of Jesus Christ. Because his Christian identity is foundational to his evangelical and Presbyterian identities, he longs for deeper unity with all believers who bow the knee to King Jesus. His new book, Divided We Fall: Overcoming a History of Christian Disunity, is a call for a robustly evangelical ecumenism.

Whitlock grounds his arguments for unity in the Bible. He looks to the Triune Lord as the source of the diversity-in-unity that should characterize believers. The New Testament envisions the church as the one body of Christ, people of God, and temple of the Holy Spirit, made up of local congregations. Jesus himself prayed for the unity of the church, and when divisions plagued some first-century congregations, the apostles lamented the strife as dishonoring to God. Whitlock’s argument is succinct, but it manages to hit key passages and rightly grounds biblical unity in Trinitarian and Christological doctrine. 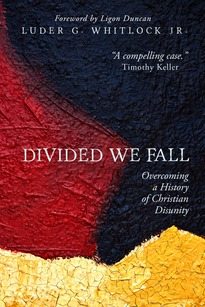 Divided We Fall: Overcoming a History of Christian Disunity

Divided We Fall: Overcoming a History of Christian Disunity

The book then turns to Christian history, surveying how the theological and liturgical catholicity of the early church developed into a more institutional unity in the medieval era. The Reformation challenged that institutional unity, but far from being ecclesial revolutionaries, most of the reformers saw themselves as part of the one church. They simply wanted to return to the earlier view of catholicity. Whitlock’s reading of Protestant notions of catholicity reflects the consensus of most recent historians, though most laypeople and too many pastors still embrace more sectarian or triumphalist interpretations of the Reformation.

The theological and liturgical catholicity of the early church developed into a more institutional unity in the medieval era. [The reformers] simply wanted to return to the earlier view of catholicity.

Whitlock also explores Protestant denominationalism, a phenomenon especially prevalent in America and regions influenced by American missionaries. Evangelicalism and denominationalism have often overlapped, but haven’t been identical, since evangelical priorities transcend denominational standards. Often evangelical unity is found at the local level, rather than in the modernist-influenced ecumenical movement. Whitlock provides case studies of disunity from his own Presbyterian tradition and points to modern examples of evangelical ecumenism, such as the early postwar neo-evangelical movement and the Lausanne movement.

Whitlock is worried that contemporary Protestants aren’t concerned enough about unity. American Christianity has been a “free market” affair from the beginning; evangelicals are an especially entrepreneurial tradition that thrives in this atmosphere, though often at the cost of intentional unity. Today, the ecumenical movement is effectively dead, and one rarely hears mainline Protestants discussing denominational mergers anymore. The early neo-evangelical call for gospel unity has been ignored as evangelical submovements have proliferated. Evangelicals are divided by denominational emphases; cultural priorities; classic theological debates about soteriology, eschatology, and polity; and church growth methodology.

Whitlock closes Divided We Fall with pastoral advice about the pursuit of unity. “The most important step in building bridges toward unity and community,” he argues, “is to grow closer to God” (69). Building on this spiritual foundation, he argues for a deeper sense of love, the building of trust, seeking understanding among different types of evangelicals, engaging honest differences winsomely and lovingly, showing kindness to other believers, and cultivating personal relationships across different traditions. Whitlock especially shines in this closing chapter.

Divided We Fall is a helpful (if at times simplistic) book that brings Scripture, history, and pastoral application to bear on the question of Christian unity. It’ll likely inspire a greater commitment to unity among confessional evangelicals. However, several questions remained unanswered.

First, how should evangelicals decide which doctrinal differences are worth dividing over and which can be tolerated in a spirit of catholicity? How does one decide which church to join, or which neighboring churches to cooperate with, or which parachurch ministries to support? How do we adjudicate the relative importance of various doctrines and priorities in fostering unity, or even just basic forms of Christian cooperation—what some have called “theological triage”? What about differing confessional traditions, especially among more conservative evangelicals who value theological clarity? Whitlock gives some wonderful (and biblical!) principles, but little in the way of boots-on-the-ground suggestions.

Second, returning to the Reformation, what of evangelical unity with Roman Catholics (or Eastern Orthodox Christians)? Whitlock doesn’t say much about how evangelicals should relate to other believers who don’t identify as evangelical but aren’t theological liberals who’ve abandoned basic Christian convictions. This seems like an important question, especially at a time when anti-Christian cultural pressures have driven evangelicals, Catholics, and Orthodox Christians to work closely together, at least on matters such as the sanctity of human life, biblical views of gender and sexuality, and religious liberty advocacy. Whitlock offers little help in navigating these questions, as his emphasis is clearly on promoting a deeper sense of unity among self-confessed evangelicals.