A comprehensive reference work on Christian ethics and the role of Scripture in ethics is a great idea. Regrettably, however, Dictionary of Scripture and Ethics is problematic at certain critical points.

While granting that biblical interpretation isn’t always easy, this volume seems to go out of its way to stress that Scripture doesn’t speak directly to our ethical behavior. It begins with three essays that frame the way the Bible has been and should be used in forming ethical opinions. These essays stress that Scripture alone isn’t sufficient for doing ethics. Granted, ethical questions do arise that aren’t directly addressed in Scripture, but Christians have historically affirmed that the Bible stands at the authoritative center of our ethics. However, the essays in view undercut the idea that Scripture provides binding ethical norms, suggesting instead that it’s a varied collection of witnesses that must be sifted in order to determine what continues to be binding—which portions “continue to manifest the redeeming power of God” and which do not (32). A few quotes from one of the guiding essays will make this approach clear:

A proper understanding of canon emphasizes that canon is not a definitive collection of timeless, divinely revealed truths. Canon is a collection of witnesses to an ongoing encounter with the presence of God in the lives of persons and communities. (28)

The canon functions not as a static deposit of timeless truth, but rather as a partner in conversation with our own experience of God’s presence in our lives. (28)

The end result toward which we should strive is a deabsolutized canon which allows for the honoring of ancient witness to the degree that it reveals to us the basic truths of our faith while at the same time honoring the power and authority of our own experience of God. (28)1

The dictionary’s ensuing entries vary significantly in outlook, as might be expected. The entry on “Sanctity of Human Life” offers a robust affirmation, though the entry on “Abortion” is less clear. The immorality of prostitution, pedophilia, and abuse of various sorts is also explicitly affirmed, though less clarity exists on topics like euthanasia and assisted suicide. There appears to be a general reticence to stand on clear biblical mandates (see, for instance, the entry on “Evangelical Ethics”)—a tendency particularly observable in the volume’s entries on sexual ethics. 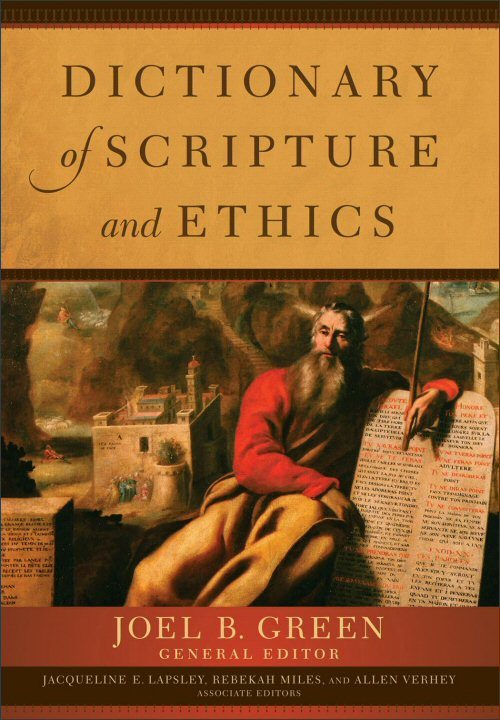 Dictionary of Scripture and Ethics

Dictionary of Scripture and Ethics

For example, associate editor Allen Verhey’s “Marriage and Divorce” entry demonstrates the outworking of the principles of the volume’s guiding essays. He states:

Scripture is not a timeless code for marriage and divorce, but in Christian community it is somehow the rule of our individual lives and of our common life. We set the stories of our lives, including the stories of our singleness and of our marriages, alongside the story of Scripture to be judged, challenged, formed, re-formed, and sanctified. Fidelity to this text and to its story does not require (or permit) us to read Mark (or any other particular text) like a timeless moral code. We do not live in Mark’s community (or in Matthew’s or Paul’s), but we do live in memory of Jesus, and we test our lives and our readings for fidelity. Fidelity requires creativity. And creativity licenses the formation of rules and judgments concerning divorce that need not be identical to Matthew’s concession or Paul’s, but that respect both the vows of marriage and the partners of a marriage, safeguard both the delight and vulnerability of sexuality, protect vulnerable partners, and honor God’s creative and redemptive intentions. (512, emphasis added)

This isn’t scriptural authority as the church has historically meant it. If we’re left saying Scripture is “somehow the rule of our individual lives and of our common life,” then it’s not the rule for our lives. According to this entry, we’re free to reset the boundaries in ways entirely different from what’s seen in Scripture—and yet still call that consistent with Scripture.

Not surprisingly, then, Verhey goes even further, stating:

Having jettisoned Scripture as the supreme authoritative norm, a dictionary of ethics from a publisher purporting to “represent historic Christianity and serve . . . evangelical readers” now encourages us to consider blessing homosexual unions.

Moreover, Jeffrey Siker’s discussion of “Homosexuality” continues in this vein. His entry concludes:

The Bible serves as a key touchstone for this conversation within the church, though its interpretation, relevance, and application in relation to homosexuality remain points of significant contention, especially as interpreters seek to correlate and integrate the biblical witness with other sources of authority—tradition, reason, and experience. (374)

Since the apostle Paul may have only known of negative or abusive “forms of homoerotic activity,” Siker argues, we cannot be certain his condemnation of homosexuality fits all expressions of it. “Like most Jews of his day,” he writes, “[Paul] seems to presume heterosexual expression as the norm, though his own preference is for celibacy (1 Cor. 7:7)” (372). And with that, Paul’s apostolic teaching to the church is reduced to first-century Jewish presumption and personal preference.

The central issue, as Siker rightly notes, is the role and authority of Scripture. However, his entry elevates “tradition, reason, and experience” as “other sources of authority” on par with Scripture, allowing us to therefore overturn its plain statements. And what “tradition” does Siker have in mind? We can only wonder, for the church’s tradition of teaching on this issue has been clear through the centuries. And what about reason? It certainly isn’t clear to everyone that reason would support affirming homosexuality. It seems to me the spirit of the age is posing as “tradition and reason” while Scripture is demoted. Indeed, it sounds like another echo of “Did God really say?”

Even though there are better entries, the volume as a whole is alarming and disappointing. I’ve focused primarily on entries concerning sexual ethics, since they illustrate the dictionary’s general approach to Scripture, and since these issues are some of the most significant ethical issues facing the church today. The value of a tool is seen in how it works at the point of greatest pressure. At such points, Dictionary of Scripture and Ethics fails.

Arguing for the nominalization of Scripture and the normalization of homosexuality isn’t a mere academic curiosity; it’s a pastoral tragedy undercutting the work of faithful ministers and blunting the reception of the biblical witness. Jesus promised judgment for those in Thyatira who were “teaching . . . my servants to practice sexual immorality” (Rev. 2:20). As cultural pressure increases on the church to accommodate the spirit of the age rather than hold fast the truths of Scripture, we must decide where we stand. This volume has made its choice. Let us make ours.

1 This quote comes from Bruce Birch and Larry Rasmussen, Bible and Ethics in the Christian Life, rev. ed. (Minneapolis: Augsburg, 1989), 156-57, and is cited approvingly by the author of the essay. It would be helpful if anyone purchasing Dictionary of Scripture and Ethics also obtain a copy of Greg Thornbury’s recent Recovering Classic Evangelicalism so that they might hear a well-articulated rebuttal of this diminished view of Scripture.