Have you ever heard someone teach about the conscience? Did a mentor emphasize the importance of keeping your conscience clean? Do you understand the link between the conscience and church unity?

This is how seminary professor Andy Naselli and missionary J. D. Crowley probe readers in the preface of their new book, Conscience: What It Is, How to Train It, and Loving Those Who Differ.

This Book Is for You

Now here’s the rub: not everything is so clear-cut that everyone believes the same thing. But you already knew that. Just have a conversation with a group of people about smoking, alcohol, R-rated movies, reading Harry Potter, tattoos, use of technology, methods of schooling children, Halloween, Santa Claus—the temperature can rise steeply and quickly!

Naselli and Crowley are faithful guides on the topic of conscience. In what they call “three steps” (19), they describe what the conscience is (chs. 1–2), help you deal with your own conscience (chs. 3–4), and explain how to relate to others when consciences disagree (chs. 5–6). Their aim isn’t to answer all of your controversial questions. Instead, their “modest but potentially life-changing goal” is to show from Scripture what God intended the conscience for, how it works, and how to care for it.

Your conscience is a gift from God and is intrinsic to your personhood (23, 25). It is also uniquely yours, since no two consciences match in every respect. No one’s conscience perfectly matches God’s will either. In our fallen world, a person’s conscience can be seared, but it can also become overly sensitive (29). Moreover, your conscience is intended for you and not others, so we mustn’t force people to adopt our own conscience standards (26).

When we consider these truths, it’s clear how relational tensions can develop. What if Joe has one standard while Ed has another? What if Jane’s conscience permits something Susie’s forbids? 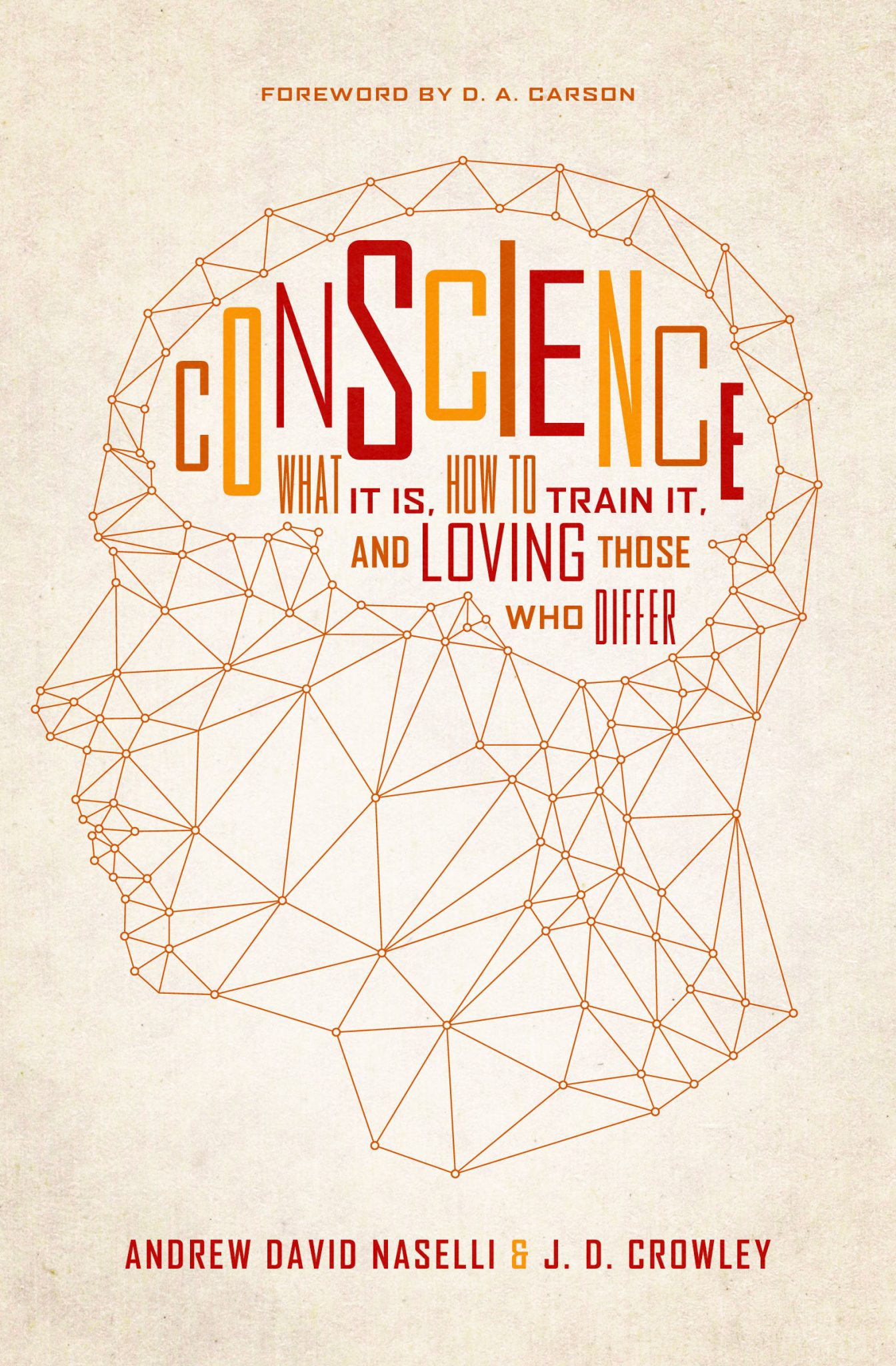 Conscience: What It Is, How to Train It, and Loving Those Who Differ

Conscience: What It Is, How to Train It, and Loving Those Who Differ

What do you do when you disagree with other Christians? How do you determine which convictions are negotiable and which are not? How do you get along with people who have different personal standards?

All of these questions have to do with the conscience. Yet there is hardly a more neglected topic among Christians. In this much-needed book, a New Testament scholar and a cross-cultural missionary explore all thirty passages in the New Testament that deal with the conscience, showing how your conscience impacts virtually every aspect of life, ministry, and missions.

Naselli and Crowley point to two great principles of conscience: (1) God is the only Lord of conscience, and (2) always obey your conscience. The giver of the conscience is also its Lord. We must care about right and wrong, since God has made us moral beings accountable to him. Even though it’s your conscience, “you are not the lord” of it (31). The second principle means our conscience should compel us. In other words, we should act according to our conscience when we believe it’s warning us correctly (30). Otherwise, as the Bible teaches in Romans 14 and 1 Corinthians 8, we’re sinning against God by violating our conscience.

Having a conscience is no guarantee one’s convictions are right. One’s conscience may actually be evil, if rooted in immoral standards (42). And conversion doesn’t automatically transform the conscience. Retraining is necessary, and it takes time.

Naselli and Crowley speak of “calibrating” the conscience in order to align it more closely with the standard of God’s Word (63). The conscience doesn’t calibrate itself. In fact, left to itself, your conscience might become more hardened through the deceitfulness of sin, or it might follow the standards of others in your culture or family (64).

We must calibrate our conscience, then, by educating it with truth we find in two spheres: inside the Bible and outside the Bible (67). If our conscience isn’t sensitive to a matter Scripture clearly addresses, we must educate it with the truth of Scripture so that recalibration can take place and a needed sensitivity can be cultivated. Sometimes, though, the conscience is mistaken due to misinformation about truth outside Scripture (67; e.g., acceptable forms of birth control), so recalibration is necessary then as well.

This retraining, or recalibrating, of the conscience may not be a quick fix. Those whose consciences have been misinformed for a long time may take years for retraining to take place. Recalibration may certainly happen at a swifter pace, but one must nevertheless be patient and trust God’s Spirit to work through his Word over time.

Naselli and Crowley introduce an insightful theological triage for matters of conscience. There are first-level issues central to Christianity, second-level issues that create reasonable boundaries—such as denominations and local churches—between Christians, and third-level issues that are disputable matters (86). For the sake of unity and peace in the body of Christ, we should avoid dogmatism about what is disputable.

The authors explore Romans 14:1–15:7 to show how Paul addressed conscience controversies within the church. As the conscience is formed and educated by God’s Word, we grow “strong” in faith, which will sometimes create tensions with those “weak” in faith. How did Paul bring these potential factions together? “His solution was love, not law” (93).

Naselli and Crowley explain 12 principles about how to disagree with other Christians on disputable matters (96–115), principles such as “Assume others are partaking or refraining for the glory of God” and “If you have freedom, don’t flaunt it; if you are strict, don’t expect others to be strict like you.”

As we love other believers and live out our Christian liberty, we must not allow the consciences of others to determine our own (110). Nor should the strong merely put up with or tolerate the weak. The strong should bear with the weak by refraining from whatever would hurt the faith of the weak (114).

Christian liberty isn’t about us and our freedom to do whatever we want. Instead, it’s “all about the freedom to discipline yourself to be flexible for the sake of the gospel and for the sake of weaker believers” (132). Why? Because, as the apostle Paul declares, the kingdom of God is “not a matter of eating and drinking but of righteousness and peace and joy in the Holy Spirit” (Rom. 14:17).

Again, this book is for you. Every believer and, by implication, every church would benefit from learning about our conscience and how it can be calibrated by the Word of God and for the glory of God. As the Spirit works in us, we can, by God’s grace, love those with whom we differ on disputable matters.

The strong and the weak need each other. And we all need Christ, the head of the church, who himself lived with a pure and clean conscience, never sinning against it and always honoring his Father with it. May it be so with us.

Mitch Chase (PhD, The Southern Baptist Theological Seminary) is the pastor at Kosmosdale Baptist Church and an adjunct professor at Boyce College in Louisville, Kentucky. He’s the author of Behold Our Sovereign God, The Gospel Is for Christians (2nd ed.), and 40 Questions About Typology and Allegory. He is married to Stacie, and they have four boys. You can follow him on Twitter.