Christian Reconstruction (CR), though a movement in decline, remains a source of controversy and study. CR’s proponents define it as a faithful attempt to systematically apply the Bible to every area of life and society. CR’s prescriptions have attracted many evangelical critics; its secular critics charge CR with intent to establish an intolerant theocracy. While there has been much handwringing in journalistic and academic circles about such “dominionism,” university presses are only now publishing dedicated histories of the CR movement.

Michael McVicar’s Christian Reconstruction: R. J. Rushdoony and American Religious Conservatism (2015) suggests that this new turn in scholarship is promising. Both critics and friends of Christian Reconstruction stand to learn quite a bit from McVicar’s precise, insightful, and original investigation. His handling of theology is sometimes clumsy, but his chronicle of R. J. Rushdoony’s life as a backdrop for the larger CR movement succeeds thanks to extensive research of private and archival materials. McVicar also deftly demonstrates how Cold War-era Protestants were deeply influenced by conservative and libertarian political movements.

Unfortunately, the same cannot be said for Julie Ingersoll’s Building God’s Kingdom: Inside the World of Christian Reconstruction (2015). Ingersoll, by contrast, demonstrates even less theological acuity as a scholar in religious studies. Her narrative is scattered and superficial, drawing only from personal anecdotes or already-published materials, and should be titled My Episodic Encounters with the Christian Right.

McVicar, assistant professor of American religious history at Florida State University, begins by explaining how Rushdoony’s early years were formative, especially his Armenian Presbyterian father’s exile from Turkey and Rushdoony’s own engagement with social ills and economic dependency while a missionary to an Indian reservation. Rushdoony would later abandon aspirations for a traditional academic or ministerial career, becoming the eventual founder of the Chalcedon Foundation. McVicar then sketches the activities of Rushdoony’s protégés, most of whom shared his impolitic and inflexible habits. He lets the excesses of CR speak for themselves. 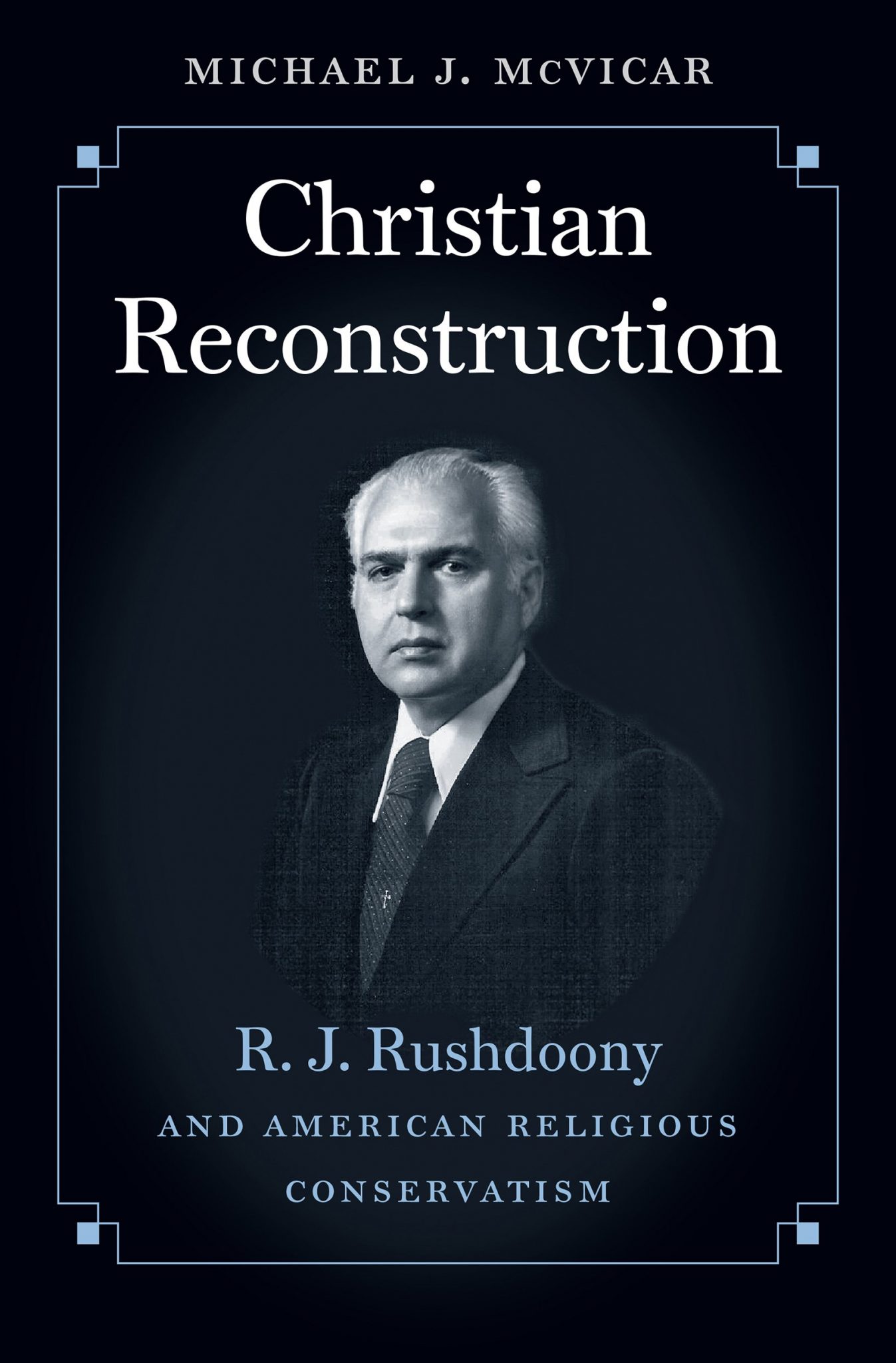 McVicar demonstrates how the young Rushdoony’s discovery of Cornelius Van Til’s rejection of “intellectual neutrality” set him on a course of stubborn polarities. Armed with presuppositionalism, cultural postmillennialism, and an insistence on the abiding character of Mosaic Law, Rushdoony subjected everything to prodigious bipolar analysis. He was as quick to berate the editors of Christianity Today for their attention to William Faulkner as he was to condemn supporters of public school for their “Molech worship.” Rushdoony took this mode of operation with him into engagements and employment with prominent mid-century right-wing cultural and political organizations such as Spiritual Mobilization, the William Volker Charities Fund, the Foundation for Economic Education, the John Birch Society, and Christianity Today. While Rushdoony found fellow travelers in these organizations, he didn’t hesitate to purge his enemies, lecture the unenlightened, part with benefactors, and leave behind a vista of charred bridges.

Only when Rushdoony created the Chalcedon Foundation in 1965, first seeded by a women’s Bible study in Los Angeles, did he have the freedom to vigorously pursue his “lawless” and “pietistic” opponents and articulate an unencumbered vision of “sphere sovereignty” under biblical law. By the 1980s, Rushdoony’s influence reached its zenith. Christian activists admitted as much: “Though we hide [Christian Reconstructionist] books under the bed, we read them just the same.” The cocksure second generation of Reconstructionists, eager to secede from one another over anything from survivalist tactics to the source of Passover blood, undermined and decentralized the movement. McVicar less convincingly attempts to discern Rushdoony’s influence on prominent evangelical leaders such as D. James Kennedy, Pat Robertson, or Francis Schaeffer; these later chapters are notable not because they demonstrate Rushdoony’s influence everywhere, but because they provide a front-row seat for the decline of CR.

McVicar avoids the temptation to exploit Rushdoony’s less popular arguments—his broad prescription of capital punishment or his flirtation with holocaust denial, for example. When McVicar finally closes his own academic distance and offers commentary, he argues that Rushdoony’s stridency reflects this age of barbarity and warfare itself—a morally awkward solution to a morally abhorrent century. The influence of Rushdoony may be more difficult to discern than McVicar suggests, but he rightly argues the collapse of the movement didn’t mean failure or disappearance. Whether or not Robertson or Schaeffer were true CR disciples isn’t nearly as important as the implicit subscription of a million Christian parents whose presuppositions about homeschooling or private education are traceable to Rushdoony and the CR movement.

Julie Ingersoll, associate professor of religious studies at the University of North Florida, begins Building God’s Kingdom: Inside the World of Christian Reconstruction with an imprecise ascription of Reconstructionist beliefs not only to Herman Dooyeweerd, Abraham Kuyper, and Van Til but also St. Augustine, fundamentalism, revivalism, R. L. Dabney, and John Calvin. Demonstrating her ignorance about Reformed debates over Reconstruction, she asserts Calvin was a theonomist. With equal incapacity she proclaims that Calvin’s “predestination [is] embraced in its full form in only the most extreme branches of Protestantism.” Likewise, rather than provide an insightful critique of the syncretism evident in CR’s libertarian economic theory, she instead defers to the knee-jerk rhetoric of an Occupy Wall Street rally: “Unrestrained global corporate capitalism fosters . . . centralization of wealth and power in massive corporate institutions.”

Ingersoll, like McVicar, is hard-pressed to trace CR’s precise influence. Fine enough, but one wonders what motivates her inclusion of cases such as David Barton, creationism, or the Tea Party. Are they included because they’re more familiar to (and disliked by) Ingersoll’s peers, or because their ideas are substantially drawn from CR? It becomes apparent that such inclusions may have more to do with her travels and naïveté than any convincing connection to CR. For example, Ingersoll reveals her surprise at learning the people attending a creationist conference seem like perfectly normal middle-class people. As for the role of CR, Ingersoll finally admits, “It is not my point here that Rushdoony, specifically, or the Reconstructionists, in general, are responsible for the contemporary creationist movement, only that Rushdoony and his work helped shape what became the dominant view.” Accompanying that clumsy gloss is an equally ham-fisted observation: “Outside of creationist circles, the rejection of the theory of evolution is considered absurd.”

Readers must judge for themselves the merits of CR and its confessional and biblical fidelity, but these books remind us that we make our social pronouncements before a fallen and broken world eager to entangle a glorious gospel with posturing about public policy.

Glenn A. Moots is professor of political science at Northwood University in Midland, Michigan, and author of Politics Reformed: The Anglo-American Legacy of Covenant Theology.