Sometime in 2016, while I was on a much-needed vacation from the hard slog of small-town church ministry, flaked out by the pool with one eye on the children and the other on Facebook, more revelations about Tullian Tchividjian’s fall and his removal from Coral Ridge flashed across my screen. He wasn’t guilty of just one affair. He had indulged in a pattern of predatory “pastoral” behavior. I was sad, but, like most Christians at the time, I wasn’t surprised.

Journalist and editor Katelyn Beaty, in her book Celebrities for Jesus: How Personas, Platforms, and Profits are Hurting the Church, tackles a problem universally acknowledged. The perennial snare of “celebrity” seems only to be growing. No one wants to admit to the longing for acclaim or the disappointment of having been duped by a charlatan, but no one—especially in an online world—seems to know how to stop either. Since Tullian Tchividjian, there’s been Carl Lentz, Ravi Zacharias, Bill Hybels—it’s too depressing to go on. Why are there so many?

What Is a Celebrity?

Celebrity is not the same as fame, which is being known because of accomplishments (think Steve Jobs) or an accident of birth (Prince Charles). We most often think of celebrities, like the Kardashians, in the way that Daniel Boorstin famously defined the term, as being known for their well-knownness. Beaty adds to this an additional criterion. “For the purposes of this book,” Beaty writes, “I’d like to offer a definition of celebrity as social power without proximity” (17). 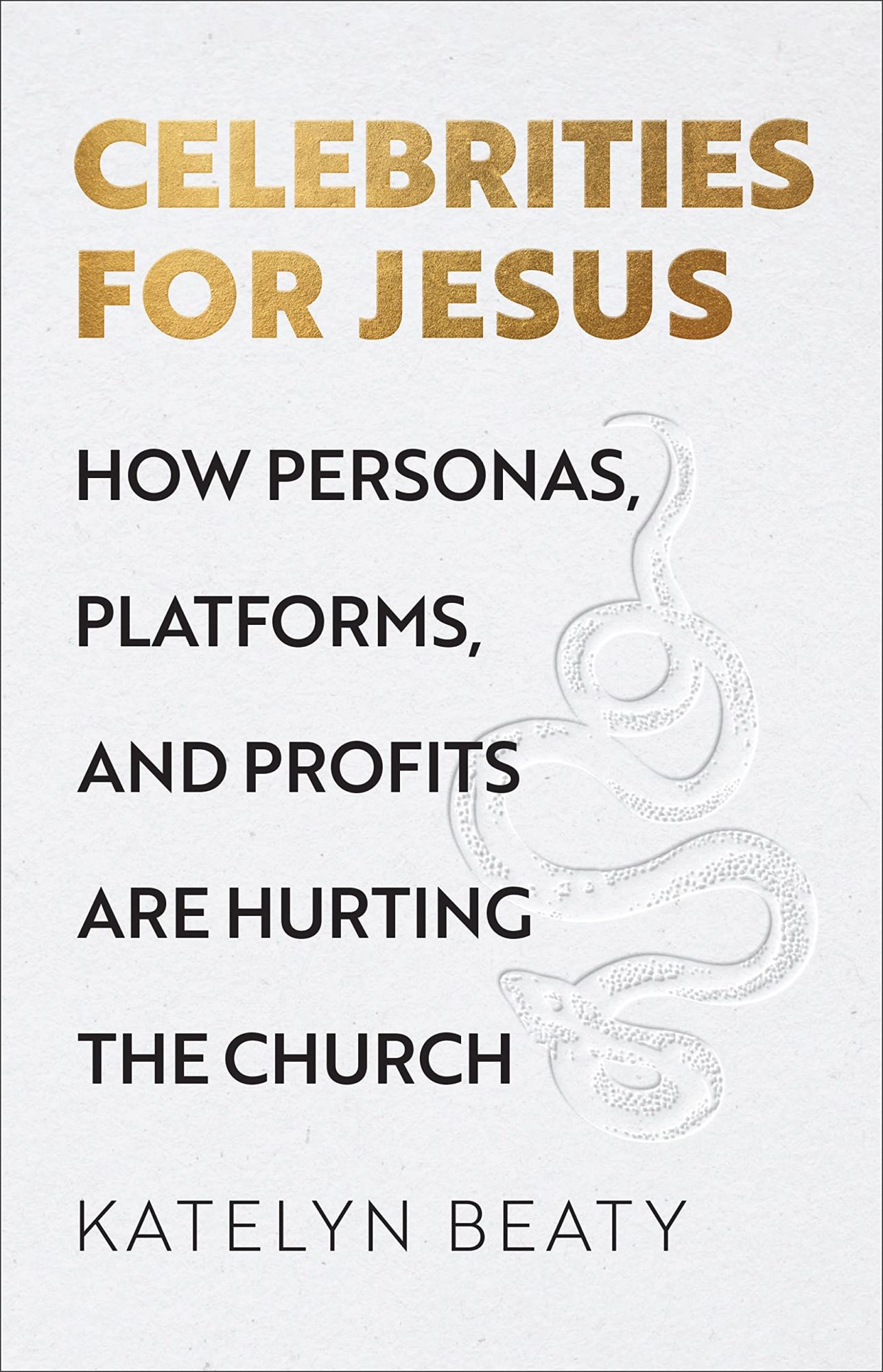 Celebrities for Jesus: How Personas, Platforms, and Profits Are Hurting the Church

Celebrities for Jesus: How Personas, Platforms, and Profits Are Hurting the Church

In light of the fall of famous Christian leaders in recent years, the time has come for the church to reexamine its relationship to celebrity. Award-winning journalist Katelyn Beaty explores the ways fame has reshaped the American church, explains how and why celebrity is woven into the fabric of the evangelical movement, and identifies many ways fame has gone awry in recent years. She shows us how evangelical culture is uniquely attracted to celebrity gurus over and against institutions, and she offers a renewed vision of ordinary faithfulness, helping us all keep fame in its proper place.

Within American Christianity, Beaty argues, the phenomena arose when individual preachers made names for themselves beyond their ecclesiastical contexts. No-nonsense evangelist Billy Sunday, for example, transcended denominational structures not as Billy Sunday the dedicated local pastor, but for his knack for drawing a crowd.

No one wants to admit to the longing for acclaim or the disappointment of having been duped by a charlatan, but no one seems to know how to stop either.

Beaty traces the evolution of celebrity evangelists such as Sunday—as well as Dwight Moody, Mordecai Ham, and Billy Graham—to the evangelical celebrity that ultimately set the stage for the disasters of Willow Creek, Ravi Zacharias, and Mark Driscoll. Her survey is helpful, if at times overly neat and tidy. Can we really blame Graham for Driscoll? Still, her account is insightful. Sunday, for example, quipped that “going to church doesn’t make you a Christian any more than going to a garage makes you an automobile” (27). His point was that sinners needed to put their personal faith in Jesus, but the hidden implication was that one might be a Christian apart from membership in the local church.

Later, Billy Graham, while insisting upon local church participation in his crusades, nevertheless communicated (intentionally or not) that the bigger the crowd and the more people saved, the more glory for God. In all this, writes Beaty, “The famous traveling preacher had replaced the local church as the link between Jesus and sinners” (29).

Why didn’t this happen in other ages? Beaty contends that “celebrity is a uniquely modern phenomenon” (12). But is it uniquely modern? One could argue that celebrity has been tied to evangelism ever since the Great Awakening in the ministries of John Wesley and George Whitefield—and one could go further back to the 16th century with reformers like Martin Luther and John Calvin. But Beaty helpfully shows that while Wesley and Whitefield travailed through trouble and inconvenience to save the lost, it has been these most recent decades, with the move from television to YouTube in barely a generation, that has raised this danger to unparalleled new heights. Veritable empires, like that of Brandan Robertson, now sprout up overnight on TikTok, flowering regardless of whether they demonstrate orthodox teaching or sexual purity. In the blink of an eye, the urgent call to save the lost is sold away for personal authenticity.

The strength of Beaty’s work lies, for me, in her willingness to scrutinize the church from the inside. She doesn’t flinch from critiquing the Christian publishing industry of which she is a part, nor the addictive property of platform building. Her tone is affectionate rather than sharp. She builds a weighty case for why Christians should embrace the ordinary and obscure business of the Christian life. As she writes,

Celebrity is a worldly form of power and evaluation of human worth. It is not a spiritually neutral tool that can be picked up and put down, even for godly projects. The moment celebrity is adopted and adapted for otherwise noble purposes—sharing the good news and inviting others into rich kingdom life—it changes the project. And it changes us. (170)

That’s the hard pill Christians in the U.S. have been invited to swallow over and over as each scandal breaks. How subtly the longing for celebrity creeps in through envy and discontent. We ask what we should do about the problem as we scroll and scroll through Instagram hoping—praying—for a few more followers.

What should we do? Beaty offers two answers to the question. The first is that Christians should eschew power. Too many Christians, she contends, are preoccupied with regaining cultural power. She dismisses what she calls “white evangelical” cries of persecution—the claim that Christians in the West are increasingly marginalized or silenced in the public sphere. Fear, rather than faith, apparently underlies this claim:

Even still, the past forty years have left many Christians sensing they no longer sit at the head of cultural and political power. They’re not even sure they have a seat at the table anymore. They certainly can’t assume their neighbors (or national leaders) treat Christian faith as normative. Over time, believers can come to see victimhood as part of their identity. (150)

Forbearing to mention the cultural ascendancy of the LGBT+ movement, for example, and its implications for Christians in the workplace, Beaty castigates those evangelicals associated with the political right. But curiously, she doesn’t name any Christian celebrity on the left, those “evangelicals” willing to embrace a version of Jesus that aligns almost perfectly with the zeitgeist.

I wish she had pressed home her critique. The temptation to compromise on the authority of the Bible and the nature of marriage and personhood is so strong precisely because it buys a seat at the cultural table. Those who weigh historical Christianity on the scales against a more relevant gender ideology and find it wanting tread a perilous path. When Christians on the right call them out, they’re often just as quick to claim victimhood as part of their identity.

Moreover, a richer discussion of power and its legitimate uses would help get to the root problem of celebrity. For example, the ability to influence and educate through writing books is a form of social power. But if celebrity is, as Beaty defines the term, social power without proximity, then should all Christian authors stop writing books that will influence and educate those outside their personal circles? Does publishing this book make her a celebrity?

Christians serve an all powerful God whose power is revealed in earthly weakness. Renunciation of power, especially coercive power, is often necessary. But power can also be used to serve the cause of justice for the oppressed. We should be wary of the lure of “social power without proximity” without denying that it can, at times, be helpful for advancing the church’s mission in the world.

The second solution Beaty offers to the problem of celebrity is the choice of obscurity over celebrity. While both wealth and, Beaty alleges, power factor into the equation, the core need is to be known. Being known by the crowds simply for being known is a beguiling temptation, and many have chosen it in place of being compassed by a holy, just, and merciful God. The remedy for this, Beaty rightly notes, is Jesus. Jesus, she says, was an obscure person from an out-of-the-way town (166). His disciples were unknown people who ultimately eschewed power. This, Beaty argues, must be the way forward.

Too many Christians  are preoccupied with regaining cultural power.

Her account of Jesus’s ministry and that of the apostles is, like her exposition of the phenomenon of Christian celebrity, too neat and tidy. The earliest Christians didn’t seek celebrity in any way that resembles the contemporary American ideal. This is manifestly true. Jesus refused power according to the values and purposes of the world. His life, death, and resurrection are a shrewd critique of the category of celebrity.

However, I wish Beaty had spent more time considering the implications of Jesus’s life and teaching. The dichotomy of obscurity versus celebrity doesn’t tell the whole story. Jesus didn’t choose obscurity as such. He claimed to be the Way, the Truth, and the Life, spreading this message along one of the most well-traveled trade routes of the first century. He was followed by “great crowds” (Matt 4:25; 8:1; 15:30; cf. 19:2). His apostles preached Christ and him crucified in the major centers of culture and philosophy. They turned the world over by their preaching. The key is that they refused to shape the gospel in ways that would, at that time, have been culturally advantageous.

Ultimately, we have to let go of everything that has the power to degrade and corrupt our worship of and obedience to a God who doesn’t stand far off. He comes close. He ministers to us in the highways and byways of our cultural confusion. He has the power to redeem and deliver. Indeed, the chief method of his deliverance is the gospel proclamation. It is our most essential task as his disciples. The question, then, is, what are we going to do with the power that God has set into our hands? Make him known? Or make our power serve ourselves?

Anne Kennedy (BA, Cornell University; MDiv, Virginia Theological Seminary) lives in upstate New York, where she mothers her six young children and helps her husband keep body and soul together in the pastoring of a small Anglican church. Anne grew up in French-speaking West Africa and is the author of Nailed It: 365 Readings for Angry or Worn-Out People (Square Halo, October 2020). She blogs at Preventing Grace.