My family recently had a birthday party for my oldest daughter, Claire. We invited mostly family and a few of her friends from school. We’ve tried to make reasonable rules for our home. There’s one particular show she’s asked to watch several times this year; we’ve explained we don’t necessarily think it’s wrong for her to watch it, but we do feel it’s not best. We’ve explained some of the reasons for our thinking. After her party, one of her friends requested to watch the show as we were choosing a movie. Before we had the chance to respond, I noticed Claire lean over and whisper, “I’ve watched that one before, but we’re gonna watch a movie.” Apparently the new interest in this show had came from this friend, and my daughter was being a faker.

This is a struggle we’ve all faced. I struggled with it during my school years. Even in adulthood, there’s pressure to be a faker—at work, church, and on social media. Youth minister and speaker Nicholas McDonald gets this: “From my first years in school, I had instinctively known the truth about life: If I wanted to get ahead, I had to be a faker” (10). He’s right. We don’t catechize our kids to be hypocrites; their hearts are bent that way from birth. What’s more, our social media world only intensifies this temptation because we “hand-select what we want people to know about us” (10).

In his book Faker: How to Live for Real When You’re Tempted to Fake It, McDonald tackles the core issues of identity and being real. He does so in a way that’s approachable for your average preteen to early college-age youth. It’s worth noting here that Faker succeeds in part because of the overall aesthetic. From design to pop culture references to personal examples from life to writing style, McDonald and the team at The Good Book Company have put together a terrific contextualized apologetic for young people. And there’s a balanced mix of pop culture contextualization with deep theological truths like propitiation, justification, resurrection, and new creation. For example, as he introduces the doctrine of propitiation, McDonald quips: “Propla-whoozee-whats-it!? Nick, you’re being a nerd again” (46). This kind of humor runs throughout and works as a kind of a release valve for those who might feel the pressure of not being familiar with certain theological terms. That’s why Faker works well. 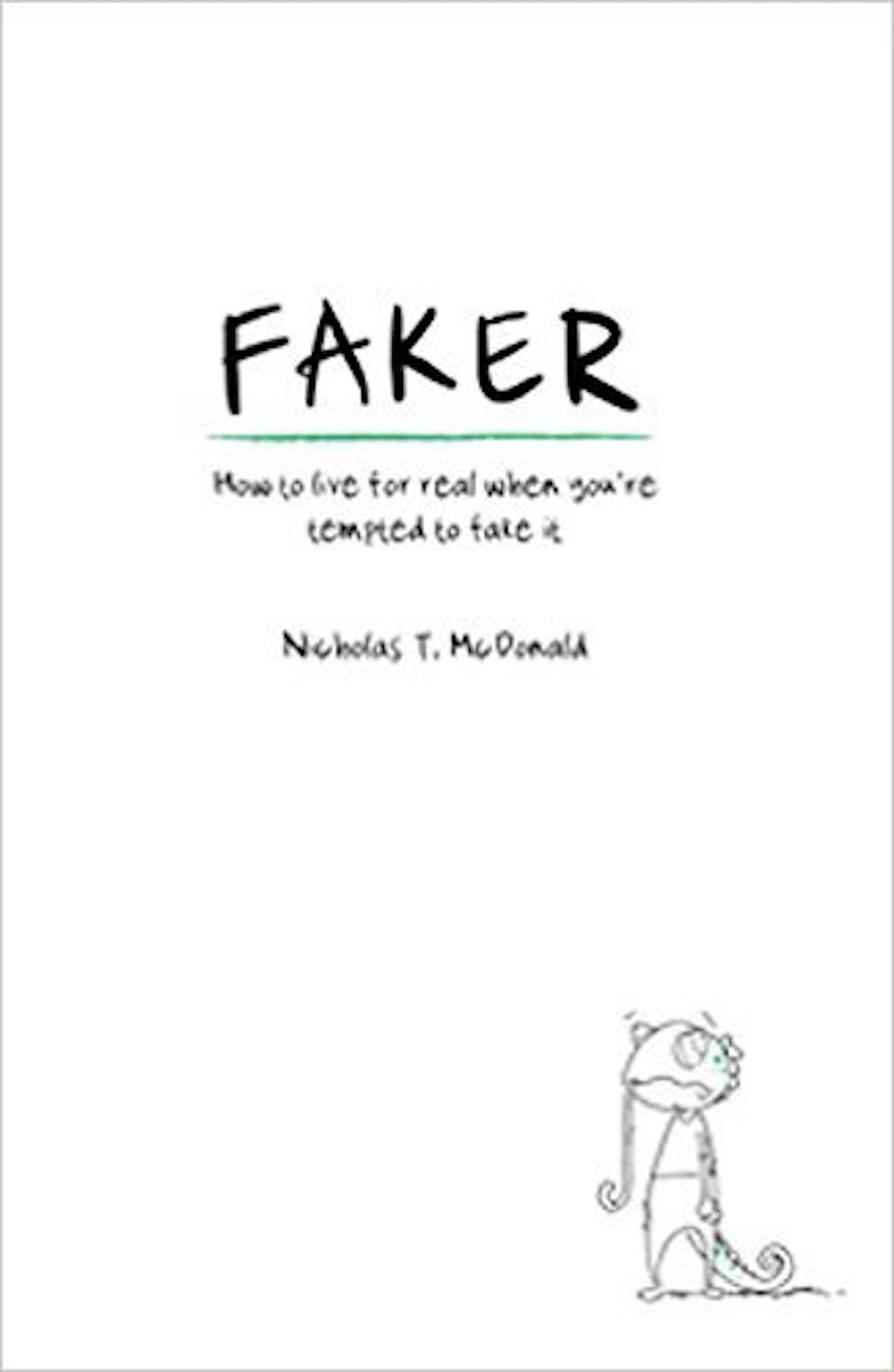 Faker: How to Live for Real When You're Tempted to Fake It

Faker: How to Live for Real When You're Tempted to Fake It

Faker is structured around the story of the Pharisee and the publican praying in the temple (Luke 18:9–14). The Pharisee self-righteously prays and goes away unforgiven, whereas the publican, who won’t even lift his eyes to heaven, begs for mercy and goes away justified.

McDonald begins by dealing with being a faker in the church—a good start in connection with Jesus’s story. He describes his secret life as “crazy Nick” (someone who told dirty jokes, for example) and also as “religious Nick” (13), who was still a faker but learned to use the appearance of religion for his advantage. “Deep down,” McDonald writes, “each of us knows that there’s something to live for beyond ‘survival’” (23). This setup is foundational for what he seeks to do in Faker. He wants his young readers to understand that faking it isn’t sustainable and that there is something—someone—better out there.

Grasping this is essential as the church labors to make mature disciples of their youth and launch them into the world to work, live, and witness. McDonald proceeds to offer a more explicit answer for the setup: Jesus is King and the only rightful judge of anyone’s life.

I also appreciate that McDonald doesn’t just settle for exploring the individual aspect of salvation; several times he makes the connection to Jesus’s wider work in the world as a result of his resurrection and ascension (33, 60). It’s not just that we’re fakers; our entire world isn’t as it should be. And Christ will one day make it new just like he does us: “The story of the cross means justification for us and justice for the world (64).

Faker progresses from core issues of identity to the proclamation that Jesus is a King who justifies fakers. McDonald ends with a call to action—swapping the fake stories the world peddles for the true story Jesus provides. “When we trade our story for God’s story, we also trade in our work for his work,” he observes. “We trade in our goodness for his goodness” (64).

My only pushback concerns McDonald’s initial definition of justification: “What does it mean to be justified? It means to be officially declared good” (52, 58). The difference between “declared righteous” and “declared good” might seem nitpicky (and is to a degree), but there’s a reason why most Protestant confessions use the language “declared righteous” (WCF XI.I; Augsburg IV; Belgic XXIII). In these confessions, “good” is typically connected to our good works, which are a result of our justification and, when done in faith, part of our sanctification.

Though I imagine this language results from trying to clarify a big term like “righteousness,” I fear it may end up causing confusion over vital theology.

But don’t let this point discourage you from reading Faker, especially because McDonald offers a clearer definition later: “All of the credit due Jesus—who loved God and neighbor perfectly—is transferred to you” (59, 64). Moreover, the section in which he connects justification to propitiation provides rich food for thought.

Overall, Faker would work in small groups with young people or even as part of family worship. The pop culture references and conversational tone allow for open conversations and smooth reading. I plan on reading the book with Claire during Christmas break, so I heartily commend it to you as well.

Mathew B. Sims is the editor-in-chief at 360 Quote LLC and has authored, edited, and contributed to several books, including A Household Gospel; We Believe: Creeds, Confessions, & Catechisms for Worship; Make, Mature, Multiply; A Guide for Advent; and A Guide for Holy Week. Mathew and his wife, LeAnn, live with their three daughters in Taylors, South Carolina, at the foot of the Blue Ridge Mountains. They attend Downtown Presbyterian Church (PCA).