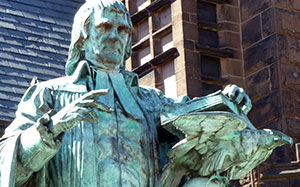 A good deal of John Witherspoon’s influence in America came from the course he taught at Princeton on moral philosophy, the lectures of which were published after his death. In the 18th and 19th centuries, moral philosophy, a key part of college instruction, included topics as diverse as epistemology, politics, ethics, and the right ordering of society.

In Witherspoon’s Lectures on Moral Philosophy, he has a small section on the meaning of marriage. It is interesting to see how Witherspoon, a confessional Presbyterian, understands marriage to be an institution oriented not first of all toward personal fulfillment, but to the protection of children.

Human creatures at their birth are in a state weaker and more helpless than any other animals. They also arrive much more slowly at maturity, and need by far more assistance and cultivation. Therefore a particular union of the parents is absolutely necessary, and that upon such powerful principles as will secure their common care. Marriage is a relation expressly founded upon this necessity, and must be so conducted as to ascertain the property of the offspring, and to promise the most assiduous, prudent, and extensive care.

According to Witherspoon, there are five “particulars which reason and nature point out relating to the marriage contract.”

1. “That [marriage] is be between one man and one woman. Polygamy is condemned by nature; for it is found that the males born, are to the females as 13 to 12, or as some say, as 20 to 19, the overplus being to supply the greater waste of the male part of the species by war and dangerous occupations, hard labor, and traveling by land and sea.”

2. “The fundamental and essential part of the contract is fidelity and chastity.” Witherspoon goes on to say that in contrast to other authors of the day, we must insist on fidelity from both women and men.

3. “The contract should be for life—otherwise it would be short, uncertain, and mutual love and industry greatly weakened.”

4. “If superiority and authority be given to the man, it should be used with so much gentleness and love as to make it a state of as great equality as possible.” Witherspoon notes that “some heathen writers gave the man power of life and death over the woman, a thing evidently barbarous and unjust.”

5. “Marriages are sometimes dissolved by divorces.” The law, Witherspoon observes, only permitted divorce on three accounts—adultery, willful desertion, and incapacity. “The first two of these,” he argues, were “founded on the New Testament, and the last on reason, being not so properly a dissolution of a marriage, as a declaration that it was void from the beginning, and never took place.”

Christians (and not only Christians) have been thinking about marriage for a long time. We would do well to listen to them carefully, and, when there is a broad consensus on essential matters, set aside their wisdom only with great reluctance.