I had only been a pastor at our church for a month or two, and so far I hadn’t preached anything provocative. As a new teaching pastor, I thought it best to lay down some solid sermons before saying anything spicy; the congregation and I were still getting to know each other.

But then we began a series in the book of Proverbs, and I was assigned the sermon on sex.

That Sunday morning was a bumpy start. When I arrived at church, I awkwardly went over the Scripture slides with a young woman volunteering to run the computer, passages from Proverbs 5–7 about “breasts” and “intoxication.”

The clicker looked like she was 10 years old because she was. As if I weren’t already uncomfortable, when the music team started its first song, my new neighbor walked into the back of the church and moved to the front. I’d shared the gospel with him days earlier, and he was visiting our church for the first time with his girlfriend. They lived together, and now they had a front-row seat to a sermon on sex.

A few days later, as we discussed the sermon, our other teaching pastor told me I preached nothing wrong—it was, in a sense, all true. The problem, he said, was my timidity about the truth, even an embarrassment that conveyed to the congregation that while God’s Word might be true, it’s not good for us. 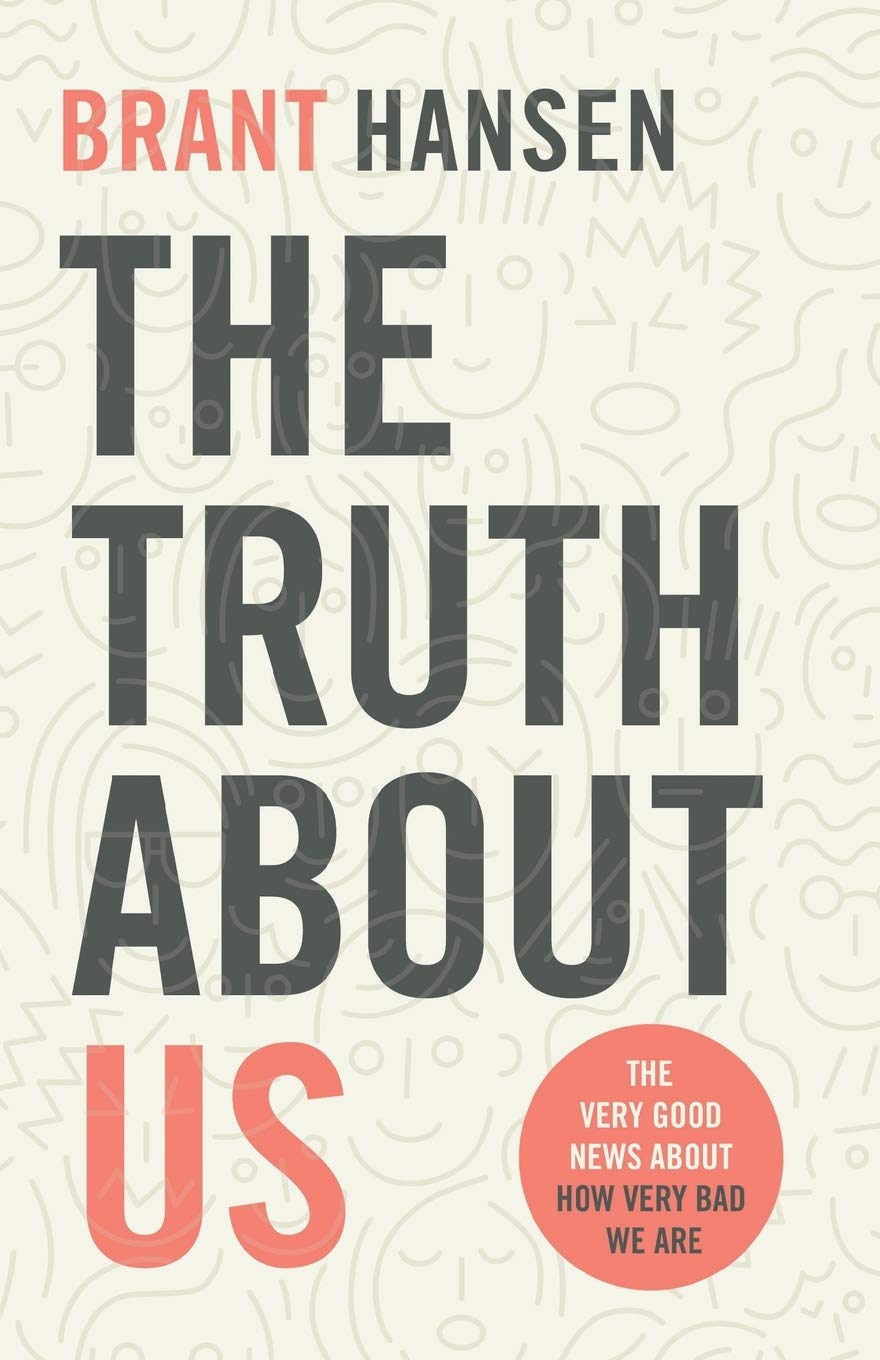 The Truth about Us: The Very Good News about How Very Bad We Are

The Truth about Us: The Very Good News about How Very Bad We Are

Seriously, who says that? Practically everyone, from priests to prisoners, thinks of themselves as morally better than average. So why change our minds? What good could possibly come from admitting that most of us are far more self-righteous than righteous?

In this book, Brant Hansen makes an entertaining and insightful case that we can find great freedom in admitting we’re not so wonderful after all. It can help us improve relationships, be better thinkers and listeners, and even make us more fun to be around.

In his conversational, fun-to-read, and delightfully self-effacing style, Hansen draws from biblical insight and the work of everyone from esteemed social psychologists to comedians to show that the sooner we get over ourselves and admit the truth, the sooner we’re free to live a more lighthearted, fruitful, fun-loving life. Because the humble life is truly your best one.

Two Books About Our Humanity

Last spring, major publishers released two books in the same week. Both authors covered similar ground, but from different convictions. The topic, broadly speaking, was anthropology: who we are as humans—and why understanding our humanity matters. One author took a biblical view and the other, by and large, did not. Both books still seem to be selling well.

The first is Brant Hansen’s The Truth About Us: The Very Good News About How Very Bad We Are. The second is Mike McHargue’s You’re a Miracle (and a Pain in the —): Embracing the Emotions, Habits, and Mystery That Make You You.

The authors have a lot in common, including their winsome, humorous speaking styles, whether by radio or podcast. The books also share common ground. But as the subtitles suggest, their roads diverge. Hansen’s book understands the gospel of Jesus as good news for our badness; McHargue sees our acceptance of ourselves (and others) as the good news.

Here’s a closer look at each of their arguments.

Hansen—a nationally syndicated radio host and advocate for healing children with correctible disabilities through CURE International—opens The Truth About Us with a “Dear Everyone” letter that simply says, “We all have a serious problem: All of us think we’re good people. But Jesus says we’re not. Sincerely, Brant P. Hansen / PS: The rest of the book is the PS.”

And the rest of the book is that postscript, 200 pages exploring what Jesus says about our depravity and the Savior’s love for real, not theoretical, sinners. In classic Hansen style, self-deprecating stories abound. But he also treads serious terrain.

“Repentance is rare and revolutionary and arduous and counter to our every instinct,” he writes, because it requires “reversing all the psychological machinery” that wants to blame others. “But if we don’t repent, we never get to feel the pure joy of forgiveness” (126).

In other words, walking through the door of truth requires the humility to acknowledge our badness. But this is the only way we come to know God, the meaning of the cross, and our heavenly adoption.

Humility is the only way we come to know God, the meaning of the cross, and our heavenly adoption.

McHargue—host of Ask Science Mike and cohost of The Liturgists—fills You’re a Miracle with fascinating scientific discussion, especially about how the human brain operates. But the book is more than facts and figures. McHargue is a gifted storyteller who pulls readers in with his engaging and transparent prose, even telling us of his attempted suicide as a teenager.

As with his first book, Finding God in the Waves, McHargue refuses to adopt the tone of an angry ex-evangelical, someone too jaded to appreciate aspects of the tradition he now rejects.

We can begin to see the difference between Hansen’s good news and McHargue’s in this extended passage in McHargue’s first chapter:

If I plumb the depths of what science reveals about my mind and body, it can lead me to a place of remarkable peace with myself. . . . This is a book about you learning that you are a miracle too. I want to start you on a journey that ends with you looking in the mirror one day, unable to hold back tears, because instead of seeing someone who isn’t tall, thin, young, or attractive enough, you instead see a profound and rare being who is worthy of love. I want you to see yourself and be awed, because you are truly awesome. (18, emphasis added)

Christians could affirm much of this passage. God pronounced his creation “good,” and the heavens declare his glory, and yet it was only after God made male and female in his image that God called creation “very good.” Thus humans are indeed, in McHargue’s words, a miracle.

Yet McHargue’s emphasis on human worthiness encapsulates the difference between the two books. The former possesses the true gospel of acceptance by God through the work of Christ, while the latter rejects orthodoxy for the gospel of self-acceptance. It isn’t surprising that McHargue says near the end of the book, “I am a Christian. But I am the kind whom most American Christians wouldn’t call a Christian” (177).

Knowing Our Badness Is Good for Us

Our hearts want a gospel of self-acceptance, and we’ll buy books that proclaim it. But as Jesus told the Pharisees, he came to call not those who see themselves as healthy and righteous, but those who know their sickness and sin (Mark 2:17).

As J. Gresham Machen wrote 100 years ago, “Without the conviction of sin there can be no appreciation of the uniqueness of Jesus . . . [and] without the conviction of sin, the good news of redemption seems to be an idle tale” (Christianity and Liberalism, 105–6). Meanwhile, the real gospel allows us to stand in front of the mirror unable to hold back tears, because instead of seeing someone who isn’t tall, thin, young, or attractive enough, we know God’s love has drowned all our unworthiness in an ocean of grace.

Jesus came to call not those who see themselves as healthy and righteous, but those who know their sickness and sin.

We talk of teachable moments with children; that Sunday I preached on sex, as a new pastor to a new congregation, taught me more in one sermon than a year of preaching. We happened to have a church picnic that afternoon, and I confessed to a mature Christian some reasons why I felt so timid about the truth. He looked at me and said something I’ve not forgotten: “Just remember, the truth is always positive.”

In a day when the truth that sinners need a Savior can feel antiquated, as though biblical anthropology were an aspect of the once-for-all gospel to leave behind, Christians might need to double down on the bad news to appreciate the good.