I had never heard of Rhett and Link—the duo behind Good Mythical Morning (their daily YouTube show with more than 16 million subscribers) and Ear Biscuits (their podcast)—until I learned of their public deconstruction story.

The two of them—who as of December 2020 are the fourth-highest YouTube earners, making $20 million a year—discussed how they moved from Cru staffers and missionaries to unbelievers—or, as Rhett now describes himself, a “hopeful agnostic.” The comedians have for years been a staple in many homes with children and young adults (with videos ranging from “epic” rap battles to testing the world’s hottest peppers to being shot with Nerf guns), so it wasn’t surprising that their public announcement unsettled the faith of many.

While deconstruction stories are nothing new in our secular age—for example, Jen Hatmaker still describes herself as a Christian and Joshua Harris doesn’t—it seems that for many, traditional Christian faith is increasingly implausible. According to Rhett, “If I don’t have to believe [Christianity], then why would I?”

Given how prevalent these stories are becoming, we at The Gospel Coalition have asked some of our most trusted writers to address the deconstruction phenomenon from a number of perspectives. If you’re trying to make sense of your faith, I hope this book will give you perspective, answer questions, or at least help you understand you’re not alone. While it might seem like your world is being shaken, perhaps even like you’re experiencing a kind of death, we are convinced a more robust, settled faith can exist on the other side. 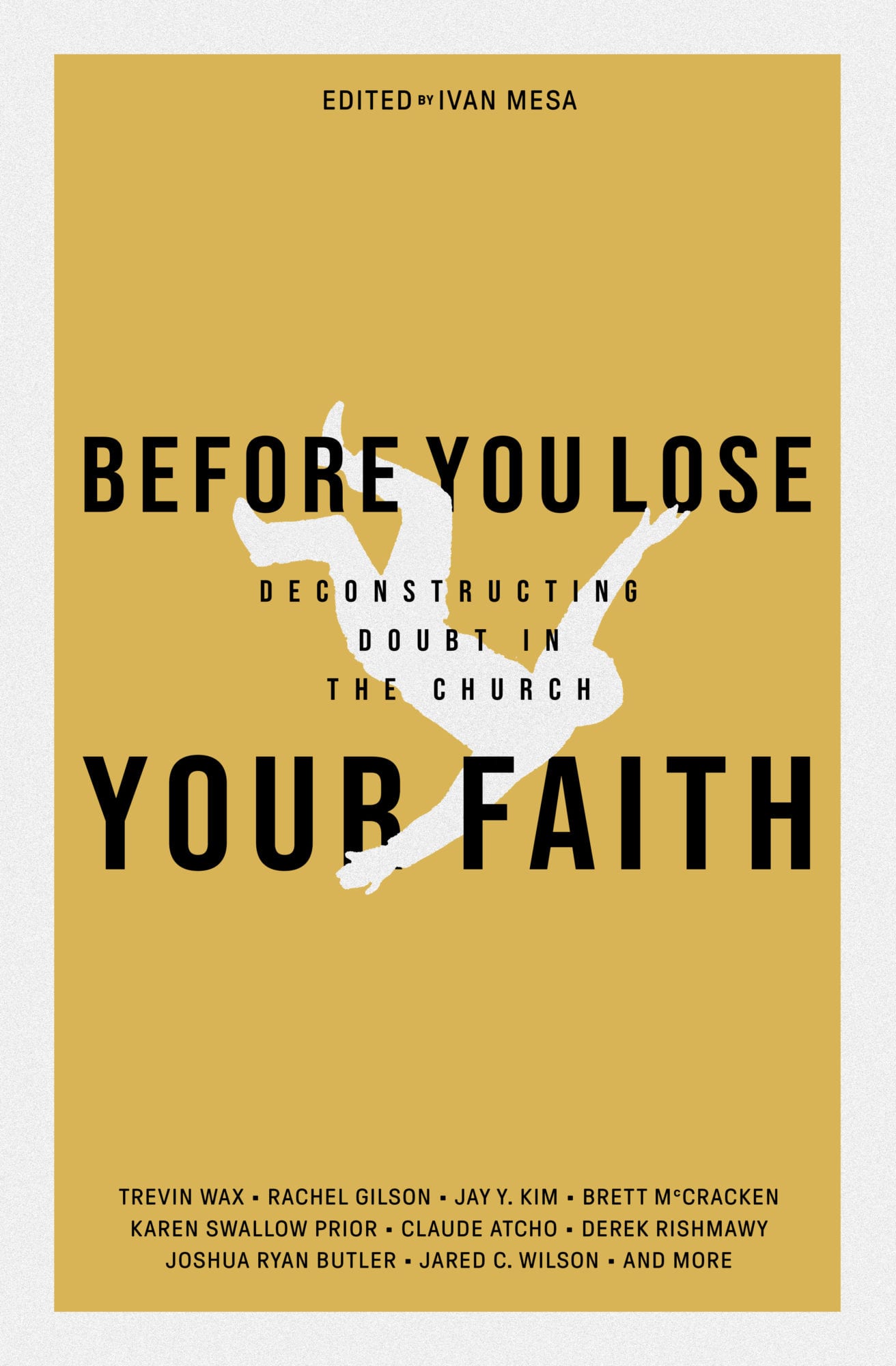 Before You Lose Your Faith: Deconstructing Doubt in the Church

Before You Lose Your Faith: Deconstructing Doubt in the Church

Yet another social-media post announces departure from the Christian faith. The cause could be sex, race, politics, social justice, science, hell—or all of the above. For many, Christianity is becoming implausible, even impossible to believe.

While it might be tempting to leave the church in order to find answers, Before You Lose Your Faith argues that church should be the best place to deal with doubts. Featuring contributors such as Claude Atcho, Rachel Gilson, Jay Y. Kim, Brett McCracken, Karen Swallow Prior, Derek Rishmawy, and Jared C. Wilson, this book shows deconstructing need not end in unbelief. In fact, deconstructing can be the road toward reconstructing—building up a more mature, robust faith that grapples honestly with the deepest questions of life.

First, let’s define terms. According to one writer, “Deconstruction is the process of systematically dissecting and often rejecting the beliefs you grew up with. Sometimes the Christian will deconstruct all the way to atheism. Some remain there, but others experience a reconstruction. But the type of faith they end up embracing almost never resembles the Christianity they formerly knew.”

In the past several years, deconstruction stories have drawn greater attention. And the trend extends far beyond the spotlight of well-known Christians with large social-media followings, book deals, and podcasts. It may be that the high-profile cases have normalized unbelief, emboldening ordinary folks to proceed in their own deconstruction journeys.

That’s one of the ways social media could be accelerating this trend. Whereas 50 years ago it might’ve been hard to find a community of deconstructing Christians (and thus you didn’t feel it was a valid social option), now it’s easy to find such community online, further removing fears or stigmas that might be associated with spiritual deconstruction.

Of course, while technology has influenced some of these social dimensions, at its core this path toward unbelief is nothing new. Jesus warned of it: “Because lawlessness will be increased, the love of many will grow cold. But the one who endures to the end will be saved” (Matt. 24:12–13). From Demas (2 Tim. 4:10) to Hymenaeus and Philetus (1 Tim. 1:20; 2 Tim. 2:17), the early church saw many abandon the faith they once professed (1 John 2:19). We should be saddened, but we shouldn’t be surprised.

We should be saddened, but we shouldn’t be surprised.

After being rejected by family and by the nation of Israel (Mark 3:20–30), Jesus redefined true spiritual family as those who do God’s will (3:35). Why do some believe and others don’t? Why do even those who believe sometimes fail to persevere in faith?

In the next chapter of Mark’s Gospel we read the parable of the sower and the four soils (4:1–20). Only one of the four soils produces fruit. Here we learn several important things about the gospel, faith in Jesus, and varying responses to the gospel. Relevant for our discussion, it explains why some who profess faith ultimately fall away. It’s a warning for anyone who claims the name of Christ.

But your story, unlike these sober warnings, can end in settled hope and newfound joy.

If you’re deconstructing, you’re likely seeking to make sense of your faith—if Jesus is worth trusting, if it’s your faith and not just some inherited belief system, if there are too many problematic or perplexing issues with Scripture, if it’s worth putting up with the failures and hypocrisy of so many who claim the name of Christ. Perhaps these concerns have only exacerbated your doubts, with so many to count that you don’t even know where to begin.

Maybe you look around at the contemporary church landscape and think, This can’t be what Jesus had in mind. Perhaps you’ve observed a version of cultural Christianity that has more to do with the American Dream than Jesus of Nazareth.

In many times and in many places, believers have struggled with the disappointing fact that not everything calling itself Christian resembles the character of Christ and the testimony of the historic church. We’ll always see cultural expressions of Christianity that may be more or less biblical. And we’ll always be rightly frustrated by this disconnect—sometimes to the point of wanting to disassociate from the mess altogether.

Deconstructing, however jarring and emotionally exhausting, need not end in a cul-de-sac of unbelief. In fact, deconstructing can be the road toward reconstructing.

Perhaps you come from a community that didn’t live out the Bible. Or perhaps you’ve not yet found a community in which the gospel actually seems alive and real. We want this book to introduce to you a community of believers who’ve wrestled through these struggles, helped others amid their doubts, and have maybe even experienced deconstruction themselves.

Because Christianity—to be more specific, Jesus—can help, whatever your questions. Whatever your struggle, it gets better with more—not less—Christianity. It might be tempting to leave the church in order to find the answers. But we want you to reconsider the church as the best place to deal with your doubts and deconstruction.

Deconstructing, however jarring and emotionally exhausting, need not end in a cul-de-sac of unbelief. In fact, deconstructing can be the road toward reconstructing—building up a more mature, robust faith that grapples honestly with the deepest questions of life.

As you read, we pray that Jesus would be more precious to you; that the church, though filled with shortcomings and sins, would welcome and point you to him; and that on the other side of this search, you too would glory in your Savior as you tell others of his never-failing love.

This article was adapted from the introduction to Before You Lose Your Faith: Deconstructing Doubt in the Church (The Gospel Coalition, 2021), available now (TGC Store | Amazon).

2 The Modesty Conversation We Need to Have