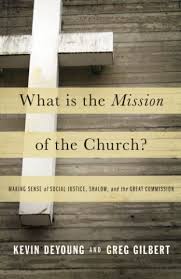 The question is more controversial than you might think. Any number of responses can sound about right until you really dig in and see that they aren’t all saying the same thing.

Phil Ryken says, “One of the last gifts Jesus gave to the church was a clear, unambiguous statement of its mission to the world. Jesus said, ‘All authority in heaven and on earth….’ That Great Commission is still in effect. Although it was first given to the apostles, it is a mission statement for all Christians at all times and in all place” (City on a Hill, 129).

I think this statement is spot on. Few Christians would have problems with it. But others would want to give a much more expansive view of the mission of the church.

For example, Christopher Wright maintains that, “Fundamentally, our mission (if it is biblically informed and validated) means our committed participation as God’s people, at God’s invitation and command, in God’s own mission within the history of God’s world for the redemption of God’s creation” (The Mission of God, 22-23).

Reggie McNeal argues that the missional church is the people of God partnering with God in his redemptive mission in the world (Missional Renaissance, 24). We are to be an incarnational presence on the earth (31), working for those things that enhance life and opposing those that steal life (35).

William Dyrness and James Engel advocate a missions model which “affirms that evangelism and social transformation are inseparable elements in Christ’s kingdom that embraces all of creation. The goal is shalom—a sense of human welfare and well-being that transcends an artificial distinction between private and public worlds. Shalom, by its very nature, is rooted in justice and compassion” (Changing the Mind of Missions, 93). The new paradigm for missions is “the establishment and extension of God’s kingdom reign on this earth” (79).

And finally, Gabe Lyons explains our mission by suggesting that “God commissioned us to share his whole story and become conduits for him to bring healing to earth and its residents. Like a capstone to the story of God, Christians are called to partner in a restorative work so that the torch of hope is carried until Christ returns” (The Next Christians, 55). Later he says, we are “on a mission, partnering with God to breathe justice and mercy and peace and compassion and generosity into the world. [The next Christians] believe that in small ways they are turning back the hands of time to give the world a glimpse of what the world looked like before sin entered the picture (59).”

So what is the mission of the church? What is it that God’s collective people are sent into the world to accomplish? With finite people, finite time, and finite resources, what should be the missions priority for your church? Should we even have priorities? And if we have priorities how should we look at other good things we could do as God’s people in God’s name?

These are the sorts of questions that prompted Greg Gilbert and me to write the book What Is the Mission of the Church? Making Sense of Social Justice, Shalom, and the Great Commission (WTS). Greg is the pastor at Third Avenue Baptist Church in Louisville and a good friend. It was a joy to work on this project with him. We hope the book is biblical, accessible, useful, and encourages the church in mission.

If you’d like a FREE COPY of the book, leave a brief comment about a missionary (past or present) that you love and respect. Please, just write one or two sentences, and be mindful the some current missionaries may not want their identities or locations made public. You may have to speak in ambiguous terms about some of your heroes.

At 2pm Eastern time, we’ll put all the comments into some kind of random number generator doohickey and pick TEN winners. We’ll announce the winners and someone will email you and figure out how to get you the book.

If you’d like more information on the book, try this link. There you’ll find a description of the book, endorsements, a video discussion, a 24 page excerpt, and other information to peruse.

UPDATE: Thanks for all the comments. It’s encouraging to hear about all these brothers and sisters serving around the world. We’ve picked ten winners. If you are one of them, you should be getting an email from Crossway this afternoon. If you don’t get an email, then you didn’t win. Or your computer is broken. Either way, sorry.