According to the Gospel of Mark, Jesus was crucified on the “third hour” (Mark 15:25).

The Gospel of John, however, says Pilate sentenced Jesus to crucifixion on “about the sixth hour” (John 19:14).

In a book I worked on with Andreas Köstenberger and Alexander Stewart, we addressed what is going on here and why this is not a contraction.

To answer this, we have to review some basics about how “time” was thought of in the first-century Mediterranean world. If we don’t, it is easy to become anachronistic and to import or insist upon levels of precision that were not in operation in the original context.

How Jews Understood Time in the Day and Night

First, we should bear in mind that in the Western world we are extremely time conscious, keep tracking of time down to the second.

But as Johnny V. Miller writes,

Time notations from the time of Christ and before were very inexact, bearing little or no resemblance to the modern concept of punctuality.

Sundials were not in common use in the first century, and there was no unit of time used smaller than the “hour.”

Second, Jews thought of a day—from sunrise to sunset—as represented by “12 hours.”

As Jesus asks his disciples rhetorically, “Are there not twelve hours in the day?” (John 11:9).

These were general references for, respectively:

Fourth, we see something analogous with how a first-century Roman or Jew would understand the night.

When discussing his impending return, Jesus commands his disciples to stay awake, “for you do not know when the master of the house will come, in the evening, or at midnight, or when the rooster crows, or in the morning” (Mark 13:35).

Here we see “night”—from sunset to sunrise—divided into four watches:

Kevin Lipp produced for us this helpful visual aid: 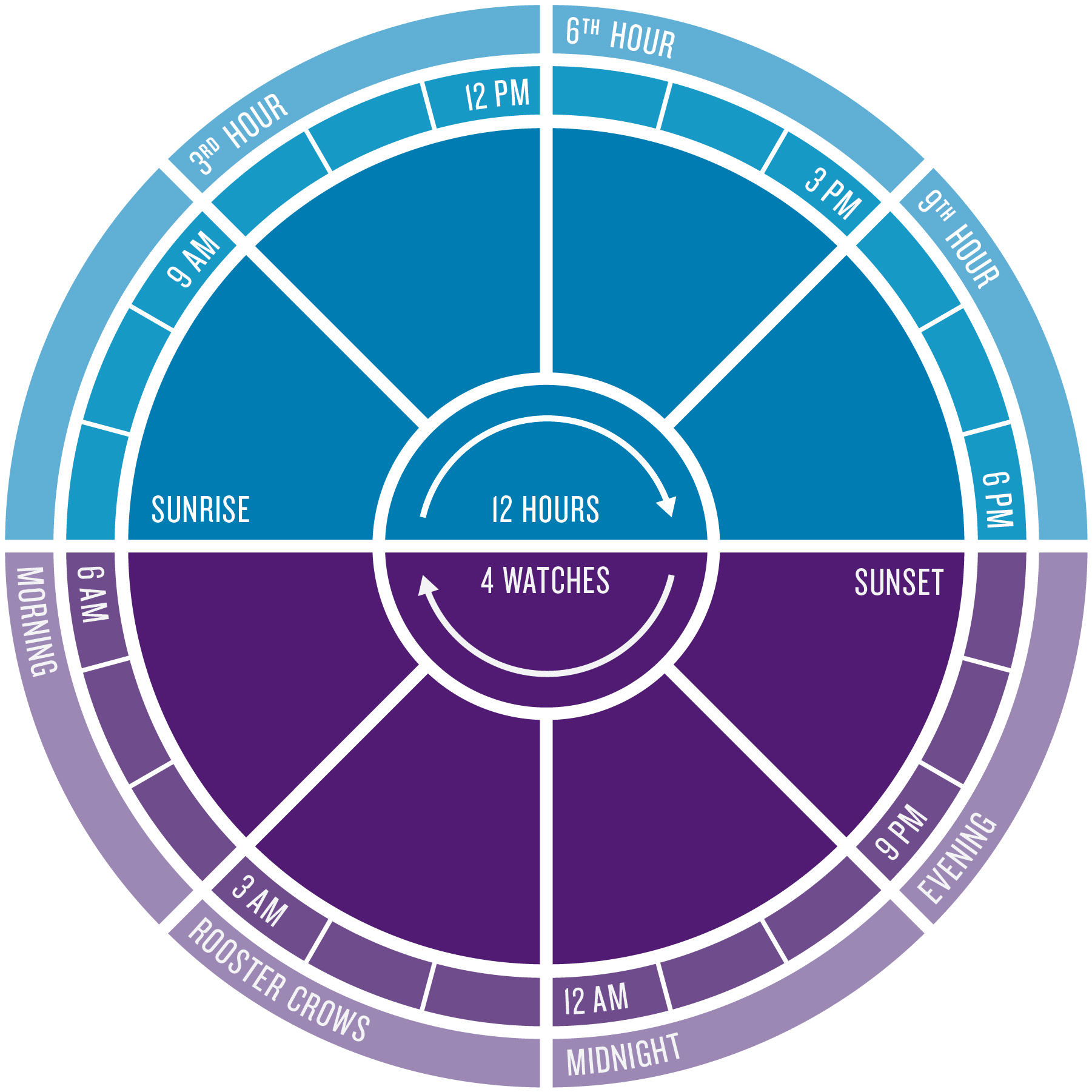 If the sentencing was delivered, say, around 10:30 a.m., and two witnesses were to glance at the sun in the sky, one could round down to the “third hour” and one could round up to “about the sixth hour,” depending on other factors they might want to emphasize (for example, if John wants to highlight in particular the length of the proceedings and that the final verdict concerning the Lamb of God is not far off from the noontime slaughter of lambs for the Sabbath dinner of Passover week).

Ultimately, there is no final contradiction, especially given the fact that John gives an approximation (“about”) of something that was not meant to be precise in the first place.

Erik Raymond
How Can Pastors Prevent Burnout?
He Is Not Ashamed
How to Get More Out of Church
Trevin Wax
My Favorite Reads of 2022
My Recent Stay at The Kilns in Oxford
The Body Is Bigger Than You Think
Scotty Smith
Two “I Am’s” and Three “I Will’s” Worth Trusting
The Lamb Who Is Our Shepherd
The Joy of Advent and Corrective Lenses of Tears
Ray Ortlund
Everything just so
The blessing we dread
The peace of Christ
LOAD MORE
Loading