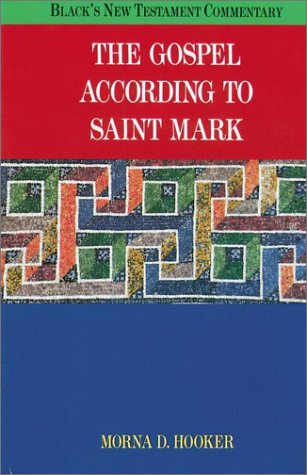 The Gospel according to Saint Mark (BNTC)

For most of her distinguished career, the Lady Margaret’s Professor of Divinity in Cambridge has specialized in Markan studies. Off and on over the last 20 years, she has been working on this commentary. For a good number of those years, her university seminar of postgraduates and resident scholars painstakingly worked through the Gospel one pericope at a time. At last her work has seen the light of day.

In this commentary, replacing Sherman Johnson’s in the Black series, Hooker engages in vintage redaction criticism. A brief introduction dates Mark to after 70, with unknown provenance. Adopting Markan priority, and following an outline reminiscent of E. Schweizer’s, she focuses primarily on what the gospel meant for Mark and his community of Christian believers. Often admitting agnosticism as to what actually happened during Jesus’ ministry (e.g. with the nature miracles), or parcelling up the text along the lines of an older form-critical distinction between tradition and redaction (though usually finding a historical kernel), she is at her best when elucidating Markan theology.

Hooker’s historical reconstructions occasionally land her in improbable impasses—the Last Supper was probably not a Passover meal but Mark has done his best to convince us that it was. And in light of the many newer critical tools for studying the gospels, it is a bit disappointing that she has utilized almost none of them, particularly literary-critical and sociological analyses. Yet overall, she has probably done about all that the scope of the Black series could permit. She alludes to having begun writing for a different series, and one realizes that 20 years of study have barely begun to see the light of day in this handbook-size volume. We can only hope that she anticipates a more extensive outlet for the wealth of exegetical insights she has accumulated.