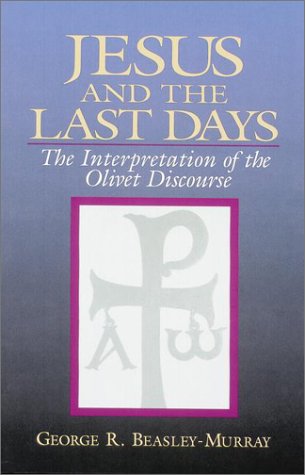 Jesus and the Last Days: The Interpretation of the Olivet Discourse

Dr G.R. Beasley-Murray, longtime principal of Spurgeon’s College and Professor of New Testament at the Southern Baptist Theological Seminary, is one of this past generation’s ‘greats’ among evangelical biblical scholars. His Jesus and the Future and A Commentary on Mark 13 have stood the test of time for a half-century as standards in the study of synoptic eschatology. Now, in his retirement, Dr Beasley-Murray has provided scholars and students alike with the painstaking service of updating his material in the light of dozens of specialized studies impinging on Mark 13 which have come out in the last 40-odd years.

This work reproduces four chapters—on the presuppositions and the development of the Little Apocalypse theory, on other theories on the origin of this ‘sermon’, and on attempts to vindicate the eschatological discourse—relatively unchanged from his earlier study. A huge chapter, occupying nearly 40% of the whole volume, surveys contributions since the rise of redaction criticism, i.e., mostly since his earlier two books. The final two chapters reflect Beasley-Murray’s thorough rewriting of ‘a fresh approach to the discourse of Mark 13’ and ‘a commentary’ on that same chapter.

The care with which Beasley-Murray surveys and the graciousness with which he critiques virtually every significant American, British and German contribution to the scholarly study of this vexed discourse offers an exemplary model for all younger scholars. His conclusions clearly resemble the original Beasley-Murray: the substance of the discourse is authentic, despite numerous touches attributable to Markan redaction; verses 5–23 reflect events fulfilled in the first generation of Christianity, culminating in the destruction of the temple in ad70; verses 24–27 refer to Jesus’ parousia to earth (contra, e.g., R.T. France) which Jesus (and Mark) believed would come soon on the heels of the abomination of desolation wrought in 70, but without specifying tire precise time, which no-one, not even the Son, can know. But Beasley-Murray is not adverse to admitting where he has changed his mind—e.g., in interpreting verse 32 in the light of verse 30, instead of vice versa, and in other minor matters.

Overall this is vintage Beasley-Murray, which means that it is vintage, paradigmatic, meticulous scholarship, for which we owe this giant of tire second half of the 20th century our inestimable thanks. Even more significantly, it is probably the correct interpretation at least of the meaning, if not always of the tradition-history, of Mark 13.