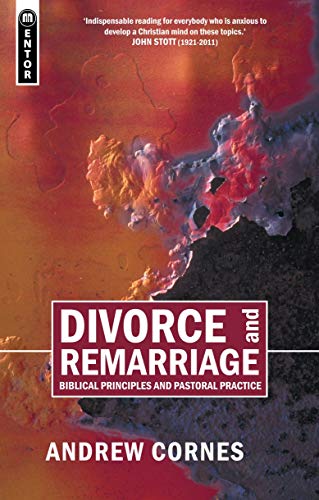 Advice on the pastorally delicate issues relating to divorce and remarriage is abundant these days, and conservative evangelicals have forged no consensus on the theological principles which should guide that advice. Some seem too quick to support both divorce and remarriage for a variety of reasons that go substantially beyond the relevant biblical texts; others interpret those texts with such strictness that their suggestions seem pastorally unworkable. No-one will accuse Cornes, vicar of All Saints, Crowborough, and former associate of John Stott’s in London, of the former extreme, and Cornes himself has tried to guard against charges of the latter by devoting a full half of his work to principles for pastoral implementation. Whether he has successfully guarded against such a charge, however, remains questionable.

In Part One, Cornes surveys the biblical texts and principles which he believes should guide a theology of divorce and remarriage. While adopting the traditional Erasmian and Protestant views on when divorce is permissible (in cases of adultery or desertion by an unbeliever) and even allowing some latitude for analogous circumstances not considered by the biblical authors, Cornes then sides with the early Church Fathers (and recent influential writers like G. Wenham and W. Heth) in prohibiting remarriage under any circumstances after a divorce. Part Two offers suggestions for mitigating the harshness of this judgment in church life; numerous helpful comments are organized under the headings of educating, caring, reconciling and bearing witness.

It is doubtful, however, if the biblical data can sustain Cornes’ stricter views. David Atkinson’s To Have and To Hold (London: Collins, 1979) is more convincing in arguing against the ‘indissolubilist’ position which forces Cornes to assume, for example, that all remarriages after divorce are permanently adulterous. Grammatical considerations of Matthew 19:9–12 and 1 Corinthians 7:15, 39 make Cornes’ conclusions dubious as well. It is a pity that Craig Keener’s well-reasoned and heavily documented … And Marries Another (Peabody: Hendrickson, 1991) was apparently not available to Cornes during the production of his manuscript. Drawing on a wealth of primary Graeco-Roman and Jewish sources, Keener’s work successfully defends the Erasmian view on remarriage (it is permissible in cases of permissible divorce).

If Cornes’ views help salvage or reconcile marriages which otherwise would be legally ended, we can be grateful for his hardline though pastorally sensitive approach. But even in maritally conservative British Christian circles (at least vis-à-vis tire US!), influential evangelical pastors have declared his views to be pastorally unworkable. To the extent that Cornes scares people away from Christianity by his excessive conservatism, God’s reign is unnecessarily hindered. We can only hope the latter scenario will prove less common than the former.