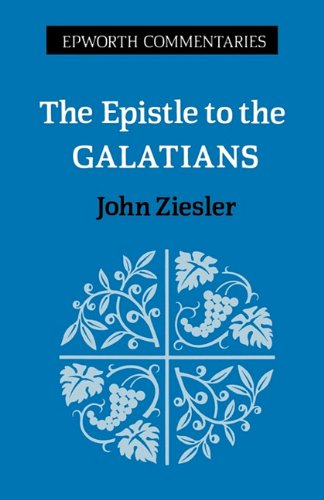 The Epistle to the Galatians (Epworth Commentaries)

Stendahl and Sanders pointed out as long ago as 1977 that no Jew in Paul’s day believed that one could be saved by good works or by obeying the whole law, nor did they believe that salvation depended on the whole law being kept perfectly. Salvation was always seen as based on God’s grace, and forgiveness was provided at the Day of Atonement for individuals as well as the nation. This means that the traditional interpretation of Galatians, as a polemic against salvation by good works, must be wrong.

Ziesler guides the reader through Galatians as though it were a totally new letter from Paul. Paul is writing not against good works, or even against circumcision, but against the demand for circumcision. The plethora of arguments which Paul uses come down to two main points. Firstly, the Gentile Galatians do not know what they are getting themselves into. They do not realize that if they get circumcised they will also be expected to obey the whole Torah. This is not impossible, because Paul managed it (Phil. 3:6), but for Gentiles living in a non-Jewish society it would be much more difficult than for Jews.

Paul’s second main point is that circumcision would deny their faith in Christ. This brings the matter into general terms which apply also today. Salvation is by faith in Jesus, and by nothing else. The Galatians were in danger of getting circumcised in order to become part of the people of God, which implied that faith in Christ’s death was not sufficient. Essay I, at the end of the book, points out that salvation by good works and self-righteousness is still a problem today, though circumcision is not. Even though Paul says nothing in Galatians about salvation by good works, he still condemns it by what he does say, because Paul condemns adding any requirement to faith in Jesus.

It is a pity that Ziesler did not put Essays I and II at the beginning of the book. Essay II covers the ground normally found in introductions, viz. authorship, dates, and the geographical problem about ‘Galatia’, while Essay I asks how one can combat the heresy of salvation by good works when Paul never addresses it. One feels that many readers will not understand the commentary on chapters 1–4 unless they read these Essays first.

It is also a pity that Ziesler chose to interpret each passage twice, first with introductory comments and then with detailed phrase-by-phrase comments. This is a common device by commentators, but it does not work well in a commentary this short. Because of the constraints of space, his detailed comments are no longer than his introductory comments, and they sometimes overlap in content.

Given the brevity of this commentary, it is amazing how much Ziesler packs in. Rarely does he avoid a difficulty, unless it really does not affect the meaning of the text, and one does not feel that he is rushing through major issues. Ziesler is a master of summary. He can present a whole field of scholarly debate in a couple of paragraphs without belittling the untold details nor making the uninitiated feel lost. For example, he reduces the recent research on ‘Son of God’ to one paragraph with one footnote. He refers mainly to modern commentaries which are easily found, and even gives page numbers for the one-volume TDNT which the reader may actually own rather than the ten-volume set found in well-endowed libraries.

‘Salvation by God’s grace alone’ is a slogan which Christians and Jews alike can agree with. Ziesler shows that it is because Jews agreed with this principle that Paul appeals to it. It is ironic that Galatians has been used by Protestants to preach against ‘legalistic’ Jews for hundreds of years. Rarely has such an ancient text seemed so new, as in this commentary.