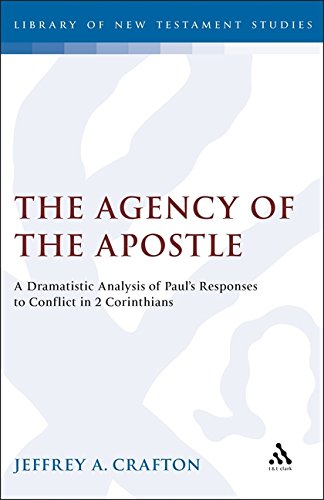 The Agency of the Apostle: A Dramatistic Analysis of Paul’s Responses to Conflict in 2 Corinthians (JSNT Supplement 51)

Jeffrey Crafton believes that the time for innovation in the method of studying 2 Corinthians, one of Paul’s most complex and enigmatic letters, has come. Crafton applies to 2 Corinthians the contemporary rhetorical-critical method known as ‘dramatism’, which is based on the theory and practice of Kenneth Burke. The Agency of the Apostle is the first thoroughgoing Burkean analysis of a NT document. Crafton makes no small claim for the results: ‘through the eyes of dramatism, this enigmatic document has become fascinating and alive, full of adroit rhetorical strategies, marvellous eloquence, and profound insight into the nature of true leadership and the life of faith’.

What is Burke’s dramatistic theory? It is a technique of analysis of language and thought as basically modes of action rather than as means of conveying information. The fundamental thesis is that ‘humans actwith language’. In describing the method Crafton introduces the reader to alien terministic screens, the dramatistic pentad, the dramatistic ritual, the agonistic principle, the purgative-redemptive agon, and so on. At times one is tempted to ask whether dramatism or 2 Corinthians is the more complex and enigmatic. As applied to 2 Corinthians, Crafton seeks to analyse the strategy of Paul’s rhetoric and the self-image he projects as he attempts ‘to offer to his audience a new language describing a new way of life, and to lead them to live this recreated orientation’.

Perhaps the theory is best explained with reference to the case study, 2 Corinthians. Crafton sees dramatism coming alongside rather than replacing more traditional methods of NT study. Hence the conflict which gave rise to 2 Corinthians is investigated in an uncontroversial manner (although Paul’s encounters with the Corinthians in Acts are ignored) and the insights of a wide range of commentaries are utilized in the exegesis of the book. He views 2 Corinthians as a compilation of three letters. In the ‘Letter of Initial Response’ (2:14–6:13 + 7:2–4) Paul presents himself as an ‘agency’; he ‘desires to reduce rather than promote the actualization of his presence in the letter’ (p. 67). He is a channel, an instrument, a vessel through which God the Agent acts. However, in the ‘Letter of Attack’ (10:1–13:13) Paul’s ‘agent-persona’ stands at centre stage. By the frequent use of the first person singular and the focusing of attention on his unique identity and characteristics, Paul acts forcefully in the Corinthians’ presence, demanding their loyalty. Finally, in the ‘Letter of Reconciliation’ (1:3–2:13 + 7:5–16) Paul is a coagent with God and mediator of God’s comfort in order to reconstitute his relationship with the Corinthians.

Leaving aside questions of alternative reconstructions of Paul’s relations with the Corinthians and the integrity of 2 Corinthians, we may agree with Crafton that ‘a critical method is good insofar as it accomplishes its task’ (p. 36). Does dramatism simply describe the obvious in a complicated and avant garde way? What is the interpretive gain? Having negotiated the jargon, this reviewer found the discussion of Paul’s strategy in a situation of conflict quite useful. Crafton is concerned to ask not just what does Paul say, but what does he hope to achieve in his relations with the Christians in Corinth by saying what he says. The value of dramatism may lie in the questions it asks. In terms of particulars, the use of metaphor, irony, parody and sarcasm in the letter receive full and often enlightening treatment.