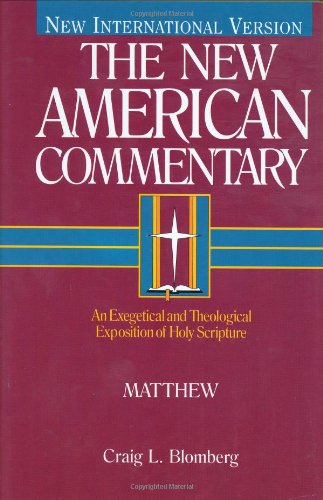 It is a considerable challenge to write a single-volume commentary of moderate size on the Gospel of Matthew. The commentator must know what to leave out, as well as what to put in, and must have the knack of coming right to the heart of the issues that are to be discussed. Craig Blomberg succeeds admirably in using his limited space well in this new commentary.

Blomberg’s commentary is solidly evangelical, well-informed, and judicious in its conclusions. While it is not a technical commentary, it reflects a high level of scholarship, and its footnotes will lead the reader to further resources for the study of a passage or problem. Blomberg approaches the text from the standpoint of ‘a cautious evangelical redaction criticism’, i.e. with a concern to focus on the distinctive theology of Matthew. Not every opportunity along these lines is taken up, however. To be sure, this may often be due to space limitations. In one case, rather surprisingly, Blomberg denies that in 15:10ff. Matthew’s omission of Mark’s editorial insertion, ‘Thus he declared all foods clean’, is a toning down of Mark’s radicalism for the sake of his Jewish-Christian readers. In another case, Blomberg denies that in 9:17 Matthew has redacted Mark in a conservative direction by alluding to the preservation of the old and new in the allusion to both the wine and the wineskins being preserved.

In addition to redactional analysis, however, Blomberg gives considerable attention to the matter of ‘narrative flow’ (the particular sequence of discrete sections) and its implications for the outline of the book. He opts for a combination of the structural analyses of Bacon and Kingsbury, adding to them his own inductive observations about the outline of the Gospel.

Blomberg leaves the date of the Gospel open, although he inclines slightly to a date between 58 and 69; similarly, as to authorship, Blomberg tentatively suggests the apostle Matthew as the author of an original draft of the Gospel or perhaps of one of its sources. He assumes the two-source hypothesis (Mark and Q), and somewhat less confidently the possibility of an M source. As to the life setting of the Gospel, Blomberg accepts the view that the evangelist writes to a Jewish-Christian church in Palestine that has recently separated from the synagogue, but which remains in dialogue with the Jewish community. Indeed, he finds that the most fundamental theological theme of the book is the problem of particularism and universalism. On these issues, Blomberg is full of insight.

Blomberg’s earlier work on the historical reliability of the Gospels stands him in good stead in his handling of this question in the commentary. He rightly insists that we measure the Gospel’s reliability by the standards of the day and the intention of the evangelist. He disallows forced harmonizations and he puts the burden of proof upon those who contest the authenticity of the tradition. As enlightened as Blomberg’s approach generally is, one is surprised to find him arguing that Matthew’s five major discourses are actually single sermons, or distillations of sermons, that were spoken by Jesus on specific occasions, rather than compositions of the evangelist from the sayings tradition. When it comes to the miraculous deeds of chapters 8 and 9, on the other hand, Blomberg does not hesitate to conclude that the evangelist has collected these narratives together for thematic reasons and that they are not to be understood as reflecting actual chronology.

As one might expect, again from Blomberg’s earlier work, his treatment of the parables is especially strong. He opts for a mediating approach that treats the parables as ‘limited allegories’, giving attention to their meaning in the ministry of Jesus and in the life of the early church.

On the difficult question of Jesus and the law, Blomberg has it just right, in my opinion. Matthew’s view is dialectical: Jesus comes in faithfulness to the law to bring it to its intended goal; yet Jesus contravenes the letter of the law at a number of points. Thus Christ ‘makes it clear that he is not contradicting the law, but neither is he preserving it unchanged’ (p. 103).

On other assorted Matthean cruxes Blomberg is equally convincing. He takes porneia (5:32; 19:9) as meaning sexual unfaithfulness. He corrects the niv, upon which the commentary series is based, in 11:12 to read: ‘from the days of John the Baptist until now, the kingdom of heaven suffers violence, and violent people attack it’. The rock upon which Christ will build his church (16:18) is Peter, and not his confession. Blomberg handles Matthew’s OT quotations with insight, allowing for multiple levels of fulfilment and the nature of typological correspondence.

On the difficult imminence logia Blomberg takes long-established conclusions. The promise of 10:23b refers to the parousia of the Son of Man, since the Jewish mission remains perpetually incomplete. Blomberg understands 16:28, ‘the Son of Man coming in his kingdom’, as referring to the transfiguration narrative that immediately follows in all three synoptics. The ‘immediately after’ of 24:29 refers to the period of tribulation described in verses 21–28, which is to be distinguished from the fall of Jerusalem, and 24:34 refers to everything in 24:1–26, but not the parousia itself.

In our day it is refreshing to see Blomberg’s openness to the supernatural in history—and it is a great disadvantage for a Matthew commentator not to accept the possibility of the supernatural! From the supernatural birth of Jesus and the moving star of 2:9 to the miracles performed by Jesus, and thence to the transfiguration and finally the resurrection of Jesus, Blomberg affirms that God has broken directly into the historical process. Even the strange story of the resurrection of the dead saints in 27:52f. does not cause Blomberg to flinch, although he does attempt to put this resurrection after Christ’s resurrection. At one point, with little justification, Blomberg makes the storm at sea (8:23–27) into an attack of Satan.

Two main things stand out about this commentary. First, it is clear that the author is an exegete, and a good one. His obvious priority is to make clear what the author meant his first readers to understand, using the good old-fashioned grammatical-historical method. Second, he is concerned to bridge the hermeneutical gap by helping the reader to understand what the text says today. Here Blomberg again and again provides sane, pastoral wisdom. He can affirm the charismatic tradition as worthy, and while not making it a norm, he can affirm the possibility of supernatural healing ‘from time to time’ in the modern world. As a further example, Blomberg notes that the exception clause of 5:32 ‘does not reflect a consideration of every conceivable legitimate or illegitimate ground for divorce’.

Blomberg has, in short, produced a fine commentary filled with solid, informative exegesis. The fact that he has managed at the same time to squeeze as much sensible application into his commentary as he does, will make the commentary especially appealing to pastors and lay teachers.