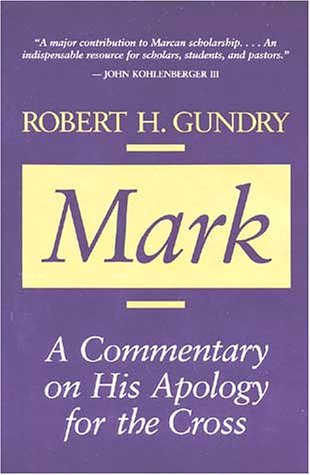 Mark: A Commentary on His Apology for the Cross

Anyone who takes the time to read Martin Hengel’s Crucifixion (Philadelphia: Fortress Press, 1977) and then the Gospel of Mark will appreciate Robert Gundry’s new commentary. The problem is that we moderns do not appreciate the shame and disgrace of the cross in antiquity. To us it has become a religious symbol; it has taken on a positive and sacred meaning. In the Roman Empire the cross was reserved for slaves and criminals of the lower classes. Crucifixion was a cruel, painful and usually long-drawn-out death. The paradox that early Christians faced was proclaiming a crucified Jew as God’s Son, Israel’s anointed king, and the world’s saviour. To the Greco-Roman world such a concept would be ridiculous. Conquerors, emperors and mighty men were the saviours of the first-century Mediterranean world, not defeated and executed would-be kings.

One of the most pleasing features of the commentary is that it is completely at variance with the regnant interpretation of Mark. This interpretation, with some variation and a few dissenters, understands Mark as an attempt to correct a theology of glory (as seen chiefly in traditions about Jesus’ miracles) by means of a theology of suffering (as seen in Jesus’ passion and, in various ways, in the disciples’ inability to understand or accept Jesus’ teaching regarding his passion). Gundry argues that it is the theology of glory, not suffering, that is dominant. This explains why so much of the Markan Gospel is given over to miracles and to an emphasis that Jesus is in command of his fate. Everything in Jesus’ life and ministry, including his death, bears the mark of a ‘success story’.

Gundry further argues that the tradition, principally drawn from Papias (early second century) via Eusebius (cf. Hist. Eccl. 3.39.15), that the Gospel of Mark was penned by John Mark, cousin of Barnabas and assistant to Peter in Rome sometime around 60 ce, is reliable (see pp. 1022–1051). Gundry’s conclusion, based on a careful reading of the Papias fragments, relevant external evidence, and especially the Gospel of Mark itself, is plausible. Although this reviewer is not as optimistic as Gundry, his careful arguments deserve due consideration.

The conclusion that the Gospel of Mark was composed in Rome midway through the reign of Nero comports with Gundry’s interpretation. The Markan evangelist has written an apology for the crucifixion of Jesus, an apology that was calculated to deflect Roman criticisms and misgivings. Jesus has not been defeated; he has not died in disgrace. The cross was his destiny and his victory. But death was not the final word; Jesus was resurrected. In conquering death his identification as Son of God and Saviour is now fully justified. He now compares favourably to the saviours, conquerors and mighty men of the Roman world. Indeed, he is greater.

This massive commentary is rich with exegetical detail and critical assessment of the secondary literature. It is not a commentary for beginning students. To profit from it fully one must be able to follow the Greek text. To understand the issues with which Gundry grapples one must be familiar with at least the major contributions to Markan studies in recent years. No translation is offered, though translation of various words and phrases are proposed throughout.

There are several specific points of interpretation that stand out. His treatment of the cursing of the fig tree (Mk. 11:12–14, 20–25), a difficult passage by any reckoning, is intriguing. His argument that Mark’s Gospel did not end at 16:8 is compelling. Redaction-critical claims and ‘close readings’ that try to argue that 16:8 (‘… for they were afraid’) was the original ending are not convincing. More convincing is Gundry’s suspicion that Mark’s Gospel concluded with a brief account of the appearance of the risen Christ, pieces of which are probably preserved (and elaborated on) in Matthew 28:9–10, 16–20 and Luke 24:9b–12.

There is one point of Gundry’s interpretation that gives me pause. He does not think that there is present in Mark an anti-Temple theme (see p. 676 and elsewhere). I think there is. It is seen in chapters 11–15, where Jesus challenges, criticizes and warns the Temple establishment, and then finally predicts its destruction.

Gundry’s commentary is sure to become the standard heavyweight for the Gospel of Mark. By way of bibliography, Gundry provides only a list of the books that he cites, advising the reader to consult the massive bibliography on Mark assembled by Frans Neirynck.