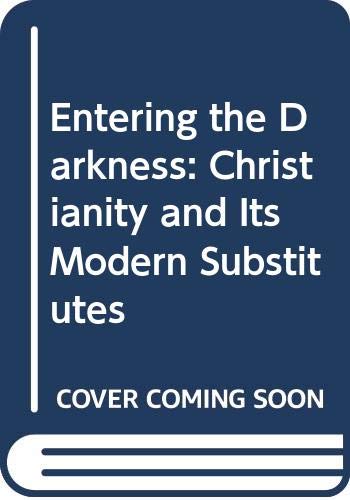 Entering the Darkness. Christianity and its Modern Substitutes

Edward Norman, Dean of Chapel at Christ Church College in Canterbury, has provided us with a characteristically eloquent and provocative collection of 20 short (five-page) essays originally delivered as addresses to students. Each essay is self-contained but they all share a common preoccupation with the spiritual destitution of both the Western world and contemporary Christianity. Evidence for this parlous condition is presented in terms of the preference of modern people for meaning over redemption, for happiness and a painless existence over repentance from sin, for emotional uplift over dogmatic truth, for the fulfilment of personal desire over moral obligation. The outcome is that the majority live mundane lives focused on trivial matters.

Although his tone is often negative, Norman is impressive in his ability to discuss cogently a wide selection of topics including, for example, black Christianity, worship, the church, revelation, and religious pluralism. The essay on the role of charities in providing a religion of good works to satisfy contemporary moralism, and the essay on sexuality where adultery is judged more ethically objectionable than homosexuality, are perhaps the best of the collection.

This short tome is worth a place on the bookshelf if only for the quality of the prose and his sceptical appraisal of the state of religion in Western Europe.