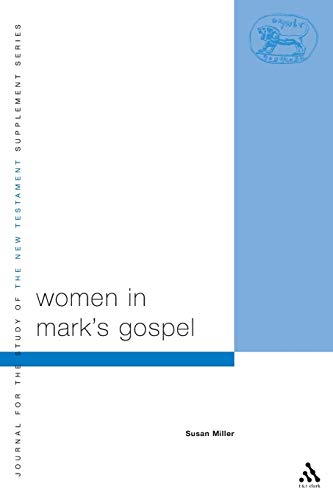 Susan Miller’s treatment of women in Mark’s gospel explores ‘the extent to which Mark’s portrayal of discipleship is inclusive and the ways in which his understanding of the new creation is liberating for women and men’ (6) in relation to Mark’s apocalyptic framework and his emphasis on new creation. Miller’s book has twelve chapters. The first chapter positions this book among recent research on women in Mark and explains Miller’s methodology. The following ten chapters examine the details surrounding the women characters in Mark: Simons’s mother-in-law (1:29–31), Jesus’ family (3:20–35), the woman with the flow of blood and Jairus’ daughter (5:21–43), Herodias and her daughter (6:14–29), the Syro-phoenician woman and her daughter (7:24–30), the poor widow (12:41–44), the woman who anoints Jesus (14:3–9) the woman who challenges Peter (14:53–54, 66–72) the woman at the crucifixion and burial of Jesus (15:40–41, 47), and the women at the tomb (16:1–8). The concluding chapter summarizes Mark’s portrayal of women, relates this portrayal to discipleship and new creation in the whole Gospel, and locates the study in relation to other feminist interpretations of Mark.

The central focus of Miller’s methodology is the interplay between feminist and theological concerns, although she also utilizes historical- and narrative-critical methods. Miller balances a ‘critical stance’ toward the text (8) that allows for analytical discernment of ‘the ways in which [NT texts] are liberating or restrictive to women’ (201) with ‘a theological approach [that] aims to place God at the centre of the interpretation’ (201–202). Miller’s conclusion reflects these aims; she finds that Mark’s portrayal of women characters contributes to his subversion of ‘hierarchical values’ inherent in first-century society, a strategy that uniquely characterizes the new creation and discipleship in Mark (203). More specifically, Mark portrays women as examples of the unobtrusive servanthood that Jesus requires of his disciples, and he associates women with anointing Jesus (14:3–9; 16:1–8) and the proclamation of the gospel (193–98).

In chapters 10–11, Miller addresses the role of women in Mark 15:40–41, 47 and 16:1–8. These texts raise the questions: ‘Why has Mark not mentioned the presence of these women before the crucifixion? Does Mark intend to highlight or downplay the role of women? What is the relationship between this group of women and the Twelve?’ (153). In answer to these questions, Miller points out that ‘the reference to several named women is striking’ given the infrequent usage of women’s names in previous chapters and in other first-century texts (157). The names point to the significance of these women as witnesses to Jesus’ death and the empty tomb. Moreover, Miller argues that these women were most likely ‘constant members of [Jesus’] discipleship group’ from Galilee (158). Their sudden appearance in the narrative and their unsung service links them with Jesus’ servant-death, and their acceptance of lower status among the discipleship group seems exemplary on the basis of 9:35 and 10:43. Although women and Gentiles are both excluded from the Twelve, ‘representatives from these two marginal groups are the only ones present at the crucifixion’ (173). However, though ‘the women are the last remaining followers of Jesus who remain faithful despite the apparent failure of his mission’, Miller interprets the ending of Mark as ‘a note of human failure’ in response to the arrival of the new creation (192). Nonetheless, Miller believes, ‘Mark’s Gospel itself is testimony that the women’s silence will not hinder the proclamation of the new creation’ (192).

Miller analysis is a valuable contribution to Markan and feminist scholarship for at least three reasons. First, this study offers a rare analysis of Mark’s female characters. According to Miller, this book is only the fourth full-length monograph dealing with women in Mark and it is the only study that analyses the impact of Mark’s eschatology on his portrayal of women. Second, although Miller brings feminist concerns to her analysis of mark, careful exegesis and attention to historical context equally impact her conclusions. Thus, readers who may not share Miller’s feminist concerns will still benefit from her scholarship. Third, Miller’s focus on women offers interesting contributions to major themes of discipleship and eschatology in Mark. This book offers a fresh perspective on women in Mark that will interest a variety of readers.