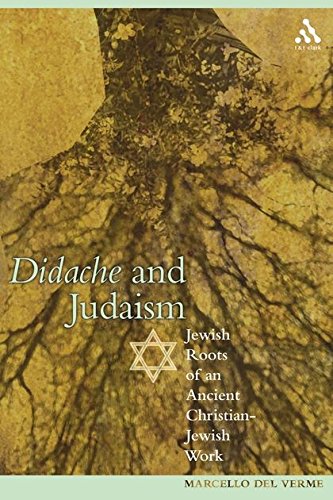 Didache And Judaism: Jewish Roots Of An Ancient Christian-Jewish Work

First published in 1883, and since included among the collection of texts known as the Apostolic Fathers, the Didache is an early Christian text with a very Jewish flavour. According to Marcello Del Verme, it should be read as a text from a period before it is possible to identify the first followers of Jesus as so different from other Jews as to be members of a new religion. He dates the text to the second half of the first century and argues that it shows no literary dependence on any of the canonical gospels. None of these points is without support by other scholars who have published on the Didache. What differentiates Del Verme’s work from theirs is his advocacy of the view that the Didache is a product of what he refers to as ‘Enochic Judaism’. This is a hypothetical Jewish movement that is postulated by another Italian scholar, Gabriele Boccaccini. His commitment to this hypothesis makes for an idiosyncratic discussion; a difficult prose style (perhaps the product of translation from the Italian in which the books was written) together with the lack of any clear argument makes his book very difficult to follow.