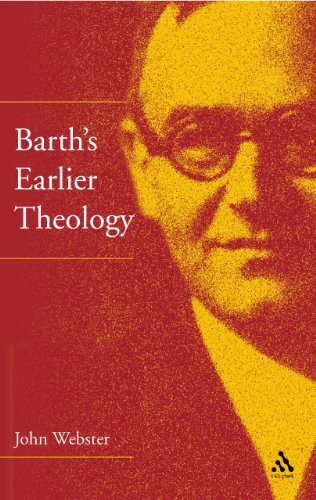 This book is what one has now come to expect from a work by John Webster: a thorough, elegant analysis and reappraisal of his subject. It flows very naturally from Webster’s long-term project (seen before in his study of Barth’s ethics and anthropology) of examining lesser-known parts of the Barth oeuvre to give a fuller picture of his theology as a whole. As he puts it: ‘Stripped of its exegesis and ethics, for example, the Church Dogmatics is a torso, and one which, moreover, attracts all manner of misinterpretations which can be corrected only by attending to what Barth has to say in its completeness’ (92).

Barth’s Earlier Theology looks at the theological professor in the 1920s and, refreshingly, examines Barth’s early thought, not as a mere product of its socio-political background, as it is so often portrayed, but as a theological product, the result of a mind crammed with Scripture and the texts and ideas of the Reformed tradition in particular.

There tends to be something of a yawning gap in the secondary literature on Barth between the second edition of the Romans commentary and the first volume of the Church Dogmatics, a vacuum that inevitably attracts rather crass and simplistic descriptions. Yet here Webster’s work manages to go beyond the stereotype of the Kierkegaardian enfant terrible whose only style is polemic and whose only idea is dialectic. Instead, he develops a picture of a Barth who, through the classical texts of the Reformed tradition was discovering and developing a positive theology of God’s revelation. What emerges is not a Barth preoccupied with epistemology or striving to segregate God and the world, but a young theologian, drawn to topics in which God’s relation to creatures is the essential quality. We also see the makings of a church theologian; not one striking out on his own at the beginning of his career, but going back to the school of historical theology and Christian doctrine.

After an introductory chapter there follow chapters on Barth’s study of the theology of Zwingli and the Reformed confessions. The chapter on Zwingli is particularly interesting in that Webster manages to make clear a point that drives so much of his own research: through Barth’s own distinct uneasiness with Zwingli, Webster demonstrates against Barth’s many critics on this point, that he does not share with Zwingli his overly contrastive theology of God’s relation to creation.

A fourth chapter on his theological exposition of 1 Corinthians, The Resurrection of the Dead, shows Barth as an expositor of scripture (another neglected theme), examining his unique exegetical blend of textual comment, paraphrase, theological reflection and application.

The final chapter is aptly titled: ‘ “There is no past in the Church, so there is no past in theology”: Barth on the history of modern Protestant theology’. Here again is a reappraisal, this time of how Barth handled his immediate theological heritage. Webster demonstrates that Barth’s handling of the great theological figures of the nineteenth century, especially Schleiermacher, renders impossible the standard line that dialectical theology effectively condemned that entire century to the waste-bin of history.

It needs to be said that Webster has refused to allow all this to remain a mere ‘life of Barth’ study of relevance to few. He is eager to make the point that Barth considered that the first thing for any would-be theologian is to go to school; above all the school of scripture, but also the school of the Church’s ‘past’ theology For this, as much as any scholarly reappraisal of his subject, the book is to be commended, for, in his own words, ‘if we do not acquire the skills to listen to what the communion of saints says to us, what we have to say in our turn will be thin and unedifying, solemn at all the wrong places and lacking in joyful seriousness about the gospel.’ (65).