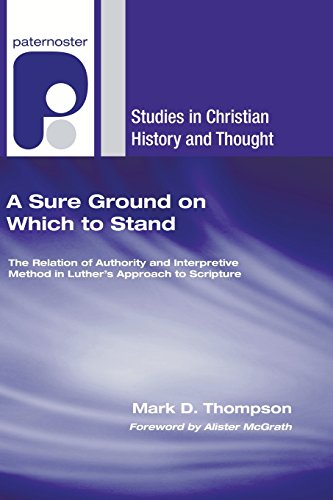 A Sure Ground On Which To Stand: The Relation Of Authority And Interpretive Method In Luther’S Approach To Scripture

How Luther regarded and consequently interpreted the Bible has remained one of the most disputed questions amongst scholars of the reformation over the past century. During this time it has received answers portraying Luther as the virtual forerunner of a wide spectrum of later movements including fundamentalism, higher criticism, existentialism, and neo-Orthodoxy. To sort out this problem, while avoiding the anachronism plaguing the former solutions, Mark D. Thompson, Director of Studies at Moore College (Sydney), performs the necessary tasks of extracting Luther from a post-Enlightenment mould and freshly examining the entire Luther corpus against the backdrop of Luther’s patristic and medieval exegetical inheritance Drawing together scattered threads throughout the Luther corpus concerning the character of Scripture, Thompson contends that Luther perceived the Bible as the authoritative Word of God, down to the very words of the text, but without denying its human authorship or literary traits. As a result, Luther’s hermeneutical approach analyzed the sacred text according to four interrelated categories: inspiratio (its God-breathed quality); tota scriptura (its unity); claritas scripturae (its intelligibility); and sola scriptura (its salvific sufficiency). Thompson succeeds admirably in leaving no stone unturned from the primary source, making this book the authoritative resources for any student wishing to access the entirety of Luther’s remarks on Scriptural authority throughout his career. Moreover, the first chapter is of value to all theological students, as it furnishes the best available synopsis of bibliologies from the first to the fifteenth centuries.

In this reviewer’s estimation, Thompson’s hypothesis persuasively accounts for 75–80% of the bibliological statements in the Luther corpus, marshalling an explanatory scope far superior to any other single hypothesis on this topic, including those proposed by Jaroslav Pelikan and Reinhold Seeberg. Nevertheless, my one area of disagreement with Thompson surrounds his methodological presupposition that the Luther corpus contains a singular doctrine of the Word of God (as opposed to multiple doctrines). Hence, Thompson seems to subject Luther’s writings to the same principle that Luther applied to Scripture—that a passage from one time period can be validly interpreted in light of passages from other periods. While this principle is appropriate for biblical interpretation given divine immutability, it may be regarded as suspect when used of an author like Luther, who was admittedly prone to theological vacillation in the heat of controversy. Rather, it seems that each of Luther’s remarks on Scripture should be interpreted in light of the whole of the document from which it comes as well as any document composed during the same stage of his reforming activities. Following this alternate assumption, one arrives at precisely Thompson’s conclusion concerning the majority of Luther’s career, from the denouement of the Peasants’ War (1525) until his death in 1546. However, the alternate assumption also indicates that during his nascent reforming years (1518–24) Luther regarded the Gospel of Christ’s grace as properly the Word of God and deemed various biblical books as the Word of God only insofar as they reflected this gospel. Such a joint assessment has the power to explain, for example, Luther’s denigration of James and hierarchy of various biblical books in his 1522 Preface to the New Testament, a treatise which Thompson candidly acknowledges as ‘a genuine tension point’ for which facile appeals to canonical openness will not suffice (136).

Although one’s evaluation of Thompson’s overarching hypothesis as applicable to either most or all of Luther’s career will depend upon the reader’s historiographical presuppositions, any resulting disagreement does nothing to detract from the outstanding scholarship which his book embodies. This monograph should be ranked among the best volumes to date on Luther’s bibliology and interpretive method.