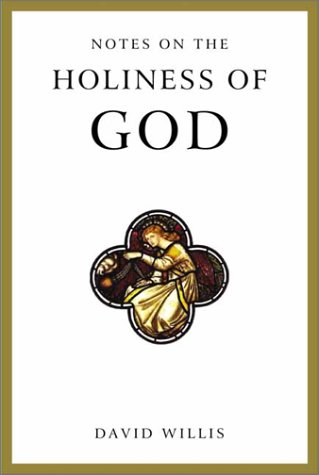 Notes On The Holiness Of God

A number of books and scholarly essays reassessing the importance and place of the holiness of God in Christian doctrine have been published In recent years. David Willis’ 2002 offering, Notes on the Holiness of God, is perhaps one of the best.

Willis takes the holiness of the cross as his starting point and he grounds his discussion of holiness in the whole course of Christ’s obedience. Since knowledge of Christ is mediated by the Holy Spirit and the community of believers joined to Christ by the Spirit, Willis then takes up the question of what it means to belong to the communio sanctorum. These chapters then provide the groundwork for chapters on the holiness of God ad intra and ad extra. Finally, he addresses the relationship between holiness and beauty before examining the place of holiness in Christian hope.

Willis begins by naming what he sees as a twofold mistake in addressing holiness by modern theologians. The first is to pit immanence against transcendence and the second is to treat both categories in spatial terms. So dealt with, holiness is relegated to transcendence and fails to be taken seriously as a category for understanding either the incarnation of Christ or the church. In building his case this way Willis is able to underline the importance of both the holiness of the triune God and address creaturely holiness while keeping Christ, in full divinity and full humanity, at the centre.

In treating the holiness of God as a divine perfection Willis engages the legacy of Reformed orthodoxy. He follows their lead, as presented by Heinrich Heppe, to define the holiness of God as ‘the pure simplicity of God’s love. That is exactly the same as saying that holiness is the dynamic simplicity of the God who is love.’ This definition itself owes a great deal to Karl Barth, but owes much more to Peter Van Mastricht. In deploying this argument Willis is able to highlight and claim for himself the common Reformed understanding of the holiness of God as ‘the perfection of all other perfections or attributes’. It is this stress on divine holiness that drives the question of the possibility of creaturely holiness as the purifying love of the Holy Other. Throughout, Willis offers significant critical engagement with Athanasius, Barth, Calvin, Jüngel, Bultmann, Bonhoeffer, and Moltmann to name several.

In all of its erudition, Notes on the Holiness of God also displays the fulness of Willis’ theological style. There are many twists and turns of phrase that serve to both ground the theological argument in the praise of the living God and occasionally obscure the more subtle points. For example, ‘so far we have not been speaking of creaturely love … but only of divine love in its infinitely relational simplicity and in its finitely complex consequence.’ He is self-conscious about stretching the bounds of language and creating the odd word to fit his theological purpose, such as mesocosm. While this can become distracting it does in the end, serve Willis’ express purpose of speaking doxologically about the holiness of God.

The book itself is an extended essay that, despite its brevity, deals with the major themes which must be addressed when dealing with the holiness of God. Because of the limited nature and scope it is not an exhaustive account of the God’s holiness. It is, in the end, simply and profoundly, Notes on the Holiness of God.