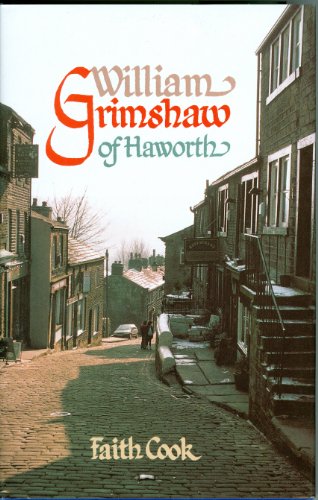 For those who know a little of the remarkable work of the Spirit in England in the mid-18th century and would appreciate a much more specific understanding of that work in one particular locality, Faith Cook’s biography of William Grimshaw is ‘a must’. Having long had an interest in the ministries of Wesley and Whitefield, I quickly became engrossed in the story of an Anglican clergyman who was visited frequently by such luminaries as John and Charles Wesley, George Whitefield, Henry Venn and John Newton. Mrs Cook draws her material from earlier biographies as well as from hitherto unpublished manuscripts and letters. We are indebted to her for giving us not only a well researched book but also for the account of a life of extraordinary fruitfulness—literally thousands came to saving faith through Grimshaw’s tireless labours.

Born of humble peasant stock, Grimshaw entered Cambridge as a sizar, securing a scholarship at the end of his first year. Although resolved to enter the Church of England, he soon learned from fellow-students ‘to drink and swear and become as vile as the worst’. Nor was his lifestyle in his early ministry any different. However, in 1739 (a significant date for those who know of the beginnings of the 18th century revival), when he was thirty-one years old and shortly after the death of his first wife Jane, the young curate was converted through reading Thomas Brooks’ classic, Precious Remedies against Satan’s Devices. His ministry radically changed as the gospel of redeeming grace became his consuming passion.

In 1742 he left Todmorden, the scene of his ‘follies, bereavement, his travail of soul and his new birth’, for the small Pennine town of Haworth (since made famous as the home of the Brontes), and the! greater part of the book is an account of the transformation effected by his ministry in both the town and its wider hinterland. Faith Cook gives us penetrating insights into Grimshaw’s spiritual growth, his fiery Gospel preaching, his pastoring of his spiritual children and of the fierce persecution he underwent at the hands of unregenerate clergy (though his bishop who came to Haworth personally to investigate their complaints was profoundly impressed by the manifest work of the Spirit through this eccentric, anointed man).

Two chapters recount the painful disagreement within early Methodism between those loyal to the Church of England and those who saw a break as inevitable. Grimshaw himself sided strongly with the Wesleys (especially Charles), who never wanted to leave the Anglican Church. Increasingly reluctant to become embroiled in the controversy, he remained lovingly open to all who were true ‘gospel men’, refusing to dissent from the church into which he had been ordained. The book concludes with a moving account of his death, funeral and the repentance of his renegade son. There are also three valuable appendices with Grimshaw’s letters, the ‘covenant’ he made with God and his ‘Creed’.

This is a book well worth reading by those who are pastors (or intending pastors) of any denomination. While some aspects of the Anglican ministry of the 18th century are no longer relevant today (such as the immense authority a parish minister wielded over his people), the Haworth story powerfully illustrates timeless principles which are indispensable in any fruitful ministry. Among many I mention only four. First, the importance of a disciplined devotional life which keeps the fires of love for Christ burning. Secondly, the total commitment to congregation and parish essential in any minister, without which the work soon becomes an unwanted burden. Thirdly, the need to disciple diligently those who come to living faith in Christ, this Grimshaw achieved through house groups for prayer and Bible study. Fourthly, the painful cost of ministry as the corn of wheat dies that others may live.

The book must also be recommended reading for those who never enter the ministry for it will give an appreciation of the pathway to fruitful service. Every pastor needs such understanding and fellowship in the gospel from the mature in his flock. Thank you Faith Cook for this most valuable volume.