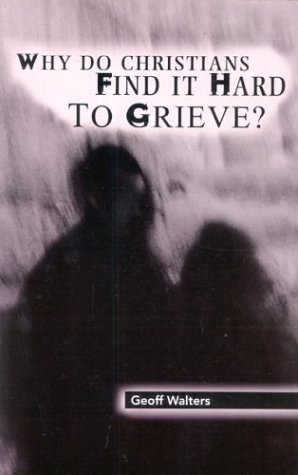 Why do Christians Find it Hard to Grieve?

Almost 30 years ago this reviewer was angered and saddened at the funeral of a prominent Christian surgeon where the person beamed as he said: ‘Isn’t this a glorious occasion?’ while the widow and family were openly sobbing and grieving for the premature loss of someone who could not be replaced. Since then I have often asked the question: ‘Why do Christians find it hard to grieve?’ There are many books on grief, bereavement counselling and the Christian’s attitude to bereavement, but Geoff Walters, who is a Baptist minister, is surely right when he says: ‘Whatever else might be said about the Christian literature on bereavement, it is usually soundly based on psychological theory … but reluctant to tackle head on the sense in many Christians’ minds that the relationship between belief in life after death and bereavement is more complex than it might be’.

Dr Walters is at pains to point out that this is not just another book on bereavement counselling, but a serious attempt to look at what the Bible says about grief and to explore how various philosophical and psychological studies have influenced the thinking of Christians about the after-life which in turn has influenced Christian writing and preaching about how western Christians approach grief.

The thirteen chapters are divided into five sections. Part 1 reviews accounts of grief in the Bible and in contemporary non-biblical accounts. He detects the beginnings of conflict in the Apology of Aristeides, a second century Athenian. In part 2 he traces this conflict to the influence of the Athenian philosophers, in particular Plato, who developed the idea of the immortality of the soul as a way of coping with grief by diminishing the impact of physical death and loss and enhancing the superiority of the soul which continues after death. He demonstrates how this view, in part arising out of Plato’s own grief at the death of Sophocles, deeply influenced some early Christian thinkers, Augustine in particular, who grieved appropriately for the loss of his close friend in youth but on later reflection felt that this display of grief had been inappropriate in a Christian, so much so that he chastised his young son who wailed at the deathbed of his grandmother, Monica. Part 3 seeks to explore the difference between the view derived from Greek philosophy that the soul was immortal compared with the biblical emphasis upon the unity of our personhood, body and soul, which are transformed in resurrection life. His thesis is that the Platonic/Augustinian attitude to death and grief leads to a minimising of the loss which death inevitably and irrevocably entails. While this may bring some comfort with the assurance that the deceased has ‘merely moved into the next room and that all is well’, to paraphrase Henry Scott Holland, it does not answer nor give meaning to the anguish of grief and the reality of the loss experienced. Accordingly, there is a dissonance between the belief that ‘all is well’ and the reality of loss. It is this ‘death denying’ subterfuge which is at the heart of many so call pathological grief reactions. There is a brief but excellent discussion here of other death denying preoccupations of our modern Western world such as the current interest in reincarnation, channelling, near death and after death experiences. Part 3 illustrates how much of current thinking on grieving has arisen from the writings of psychiatrists. Beginning with Freud, who coined the term ‘grief work’, to Bowlby and Murray Parkes, there has been an attempt by clinicians to understand what ‘healthy’ grief is and why some people are able to make progress through the process while others become trapped and enmeshed in a process of grieving which is seen to be pathological and destructive. Walters, I think rightly, tries to outline the dynamics which hinder a healthy grieving in Christians which includes the tendency to use words of comfort which derive more from a philosophy of immortality of the soul than a theology of resurrection. Robust quotations from Barth, Küng, and Thielicke support his contention.

Part 5 is an excellent review of how Christians view grief, the afterlife and bereavement today. Although somewhat sharp in is comments on contemporary writings and books published for a Christian readership, there is much salutary comment on the vapid content of some, inconsistencies in others and total psychological plagiarism without Christian comment in a few. By contrast in his critique of A Grief Observedby C.S. Lewis, Walters infers that Lewis was too good a theologian to accept the concept of survival of the immortal soul, hence the poignant description of the pain of grief working along with a hope based on the nature of God himself. In the final chapter there is first of all an attempt to work out a ‘theology of grief?’, which he believes must be based upon the biblical view of creation of human beings which sees body and soul as personhood and a psychosomatic unity. Secondly grief must be Christcentred. Thirdly, ‘death is death and will remain so unless and until God intervenes’. Fourthly, our sufferings must reflect the sufferings of Christ as we take on his mantle of suffering. Fifthly, the Christian doctrine of the resurrection must mean ‘restoration to life of the whole person’. Our hope as Christians is of resurrection of full personhood but meantime we grieve as we adjust to the irrevocable loss of some aspects of relationships within this life which will not be replaced in our resurrection life.

While the author reiterates several times that this is not another book on counselling, there is much of value for the Christian pastor and anyone who is involved in the counselling of grieving people. It has the marks of a Ph.D. thesis reordered for more popular circulation in that there is a tendency to be polemical in order to make the case. Likewise there is no reference to the thinking and writings of the Eastern Orthodox churches where the dichotomy between body and soul is less marked and Augustinian thinking less influential. That is perhaps a major omission in a work of this depth and when many contemporary Western popular theologians admit their indebtedness to Orthodox Christianity. As a psychiatrist I am wary about his espousal of specialists in counselling the bereaved within church fellowships, which can lead to a deskilling of those who have a natural gift for counselling and a minimising of the need for the whole fellowship to be helped to have a fuller theology of suffering and resurrection hope. It is an axiom that the more complex the relationship in life, the more complicated will be the grieving process following a bereavement. Dr Walters certainly has gone some way to outlining that the less adequate and robust our theology and teaching about death and the after-life, the more ineffective and inadequate will be our counselling and enabling of healthy grieving. This is a book which challenges pastoral platitude and hopefully prepares for something which can translate this material into preaching and pastoral language. Nevertheless it is the best attempt I have seen in trying to tackle the question of how ‘we do grieve, but not as those without hope’.