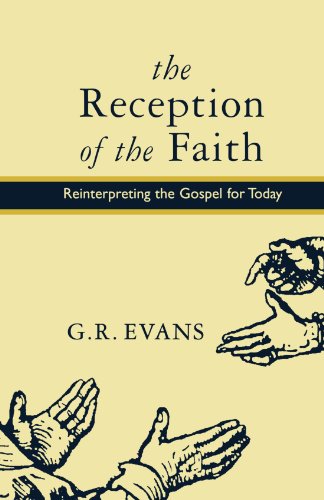 The Reception of the Faith: Reinterpreting the Gospel for Today

Gillian Evans is the distinguished Cambridge historian, known especially for her work on Anselm and Augustine. She is also an ardent ecumenist of the high church variety, and these twin foci of church history and ecumenical thought are brought together in this book. Packed with cameos from the history of Christianity, it is a delightful ride through unusual ecclesiastical countryside. What is its thesis?

That is quite a difficult question to answer. ‘Reception’ is a technical ecumenical term from the catholic tradition in its denominational sense. The term became quite well known throughout the distinguished work of the first Anglican Roman Catholic International Commission and its Final Report.

There we learned of the dialectic between the church and the episcope, and in pyramidical ascent between councils and primatial archbishops, the topmost point being occupied by the pontiff. The teaching office of the church, centred in the pontiff whose office includes moments of particular inspiration in defining dogma, is for the sake of the whole church, in that report. The laity ‘receive’ the teaching as time goes on—or not as the case may be.

Liberal catholic Anglican apologists still, for example, in dialogue with Roman Catholics, will appeal to a process of reception at work in the Church of England: thus it is technically possible that the ordination of women will not be ‘received’ by the whole church, the jury is still out. Or again, it is often pointed out that the Vatican encyclical Humanae Vitae banning artificial contraception has not been ‘received’ by the faithful—especially in Italy it seems. This in theory creates a problem: teaching has not been received: is the teaching therefore invalidated? The message does not seem to have got home, as yet, to Cardinal Ratzinger in Rome, but theoretically it might.

That gives a couple of interesting examples of the topic of the book, what the author is discussing. For Gillian Evans, and the WCC, ‘reception means a continuing process of reinterpretation or appropriation of the Gospel in new circumstances’. This process is complicated, she rightly says, in the light of the divided state of the churches; there are now separated reception processes going on. Like traditions and Tradition, might there be said to be receptions and Reception? At this point one must pause to ask if the concept of reception is in fact being exaggerated in importance: it is not self-evident to the standard evangelical Christian, for example, that reception is such a key process. It may be a second order process perhaps, all part of new theological interpretations being developed and thrown into the rough and tumble of church life: issues such as the ordination of women, or the phenomenon of homosexuality, for example, are engaging the church’s attention. But when the rough and tumble has settled down, who is pushing teaching down to the laity so that they can see if they like it or not? To the evangelical mind, the very notion of ‘reception’ is a hierarchical one likely to be confusing the gospel message with an ecclesiastical structure or magisterium, if it is seeking to address first order gospel questions.

To be fair to her, Gillian Evans does raise many examples of such church debate in seeking to define and clarify ‘reception’. She speak of the Reformation as the moment in church history when the church was faced with the question of justifying her teachings with reference to Scripture, which so became a deeply important criterion for any ‘reception’. This principle should mean that even previously ‘received’ doctrines can come under scrutiny if fresh interpretative light breaks out, hence ‘reception’ cannot confer status, it is rather the process of the history of doctrine and ethics. The church does not create truth but recognises it as given to her: many doctrines and practices were thoroughly ‘received’ by the laity from the official pastoral teaching of the church, now happily rejected—the charge of deicide against the Jewish people for example.

Is reception therefore a matter of ‘reinterpreting the gospel for today’, in a primary sense, as the subtitle of the book claims? In spite of the mass of interesting historical ecclesiastical narrative, I am not at all sure.