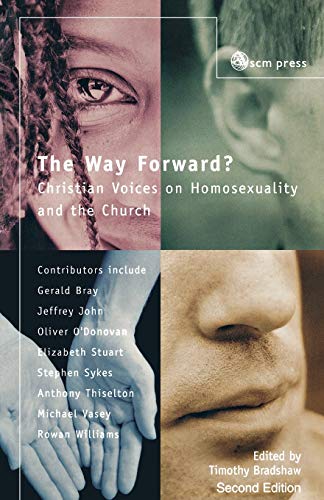 The Way Forward? Christian voices on homosexuality and the Church

This collection of essays is intended as a response to—in the sense of a critical interaction with—the St. Andrews Day Statement, which was published in November 1995. This was drawn up by a group of evangelical theologians at the request of the Church of England Evangelical Council. The Statement, we are told, ‘was produced by a group of theologians concerned at the fevered conflict over homosexuality gripping the Church’ (p. 1). It sought ‘to provide some definition of the theological ground upon which the issue should be addressed and from which any fruitful discussion between those who disagree may proceed’ (p. 5). Of particular concern to the group were two matters: ‘the claims that quasi-marital relationships between people of the same sex be given legitimacy and that practising homosexuals should be allowed to proceed to ordination’.

The essays seem to fall into two main categories. Some directly address the Statement itself whilst others, more indirectly are directed to the situation, cultural, social, exegetical, in which it was framed. An example of the first category is the contribution of Rowan Williams. He suggests that there needs to be ‘some recognition of the fact that those who want to argue what I have called a revisionist position on the possibility legitimacy of ‘sexual expression’ for the person of homosexual inclination may, like their opponents, be trying to find a way of being faithful and obedient to the givens of revelation’ (p. 19). But the authors of the Statement do not wish to be pulled in this direction, for they recognise marriage and singleness as the only two legitimate vocations in which life can be lived (p. 9). Yet when they immediately go on to call for ‘a certain flexibility’ in pastoral care may they not have opened the door to the revisionist position? This is a point picked up by Gerald Bray who asks how flexible can we be? He suggests that those who advocate liberalising the Church’s official teaching and practice ‘are not looking for pastoral care and sympathetic care and sympathetic understanding from evangelicals’ (p. 43).

Martin Hallett and the late Michael Vasey, in their respective contributions, illustrate how problematic the call for ‘a certain flexibility’ is. The former, who became a Christian from a homosexual life-style, writes that when he became a Christian, ‘I felt many of my emotional and therefore sexual needs were fulfilled through special relationships with Christian men. The boundaries we set meant no sex, but I did feel able to love and be loved’ (p. 129). Michael Vasey, on the other hand, argues that ‘a general Christian ethic does not require the rejection of non-marital forms of social affection. Nor does it require the same ethical evaluation of genital acts for those who are able and those who are not able to conform to the gender patterns prevailing in the culture’ (p. 69).

Other essays in this symposium, as I have already pointed out, address wider issues. Most notable in this category are the contributions of Oliver O’Donovan and Anthony Thiselton. Professor O’Donovan feels that there can be a fruitful theological debate on the issue of homosexuality and he suggests ways in which it might proceed. However, he warns that so long as the Christian gay movement ‘is content to present itself in the guise of injured protest, armed with a list of rights it has been denied, then, whatever does happen, a meeting of minds will not happen’ (p. 36). Professor Thiselton addresses the pressing issue as to whether hermeneutics can ease the deadlock over the disputed biblical passages and advances three provisional models of more sophisticated hermeneutical approaches. I found his essay the most helpful in the book.

I envisage that this collection of essays will provoke at least two reactions. Those who are fighting to preserve the Church’s traditional teaching will feel that in its overall thrust it is too concessive. Those who want to permit stable homosexual relationships within the Church will regard the symposium as unduly cautious, even though viewpoint does find clear expression in the volume. So the debate will continue.