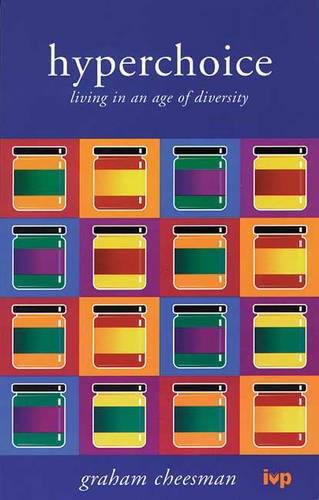 Hyperchoice: Living in an Age of Diversity

There was in his world no evil or good save what he set up as such. All around him things had formed a circle and waited without making a sign; he stood alone in the midst of a monstrous silence, alone and free, without recourse or excuse, irrevocably condemned, condemned to be free.

Living at the end of the twentieth century presents us, says Cheesman, with an unprecedented array of choices, whether it is which item of food to buy from Tesco’s or which church to belong to. What’s more, our relativistic post-modern culture seems to have taken from us all the old guidelines which helped us make our choices, whether they were social, cultural, ethical or religious.

So choosing—and we have to do lots of it—is hard. How do we cope? And, in particular, how do we cope as Christians?

One thing we must not do, says Cheesman, is retreat into our evangelical culture, and let that shape our decision making. Nor must we take refuge in the traditional evangelical interpretation and application of the teaching of the Bible. Rather, we must make Christ the centre—of our lives, our theology, our decision making, our mission, and our culture.

The book ranges over sociology, ethics, missiology, theology and a number of other areas. It introduces us to the background to our current culture, the sources of diversity, our view of ourselves, and the pressures of pluralism, relativism and postmodernism. It seeks in particular to lay a basis for Christian decision making in four specific areas: ethics, theology, mission and Christian unity. In the first and third Cheesman develops a Christcentred response, though he rather leaves us to work that one out for ourselves in the other two.

I found Cheesman’s central argument well presented and convincing. That’s not to say I agreed with everything he says. I can’t accept his claim that ‘soon every household will have a personal computer with multimedia’; I’m afraid the poor will continue to exist among us. Nor am I sure about his statistic that there are two and a half times as many Roman Catholics as all Protestants put together; the figures I’ve seen put the Catholic community at 963 million and all Protestants together at 608 million.

I liked this book. I liked the Christcentred emphasis. I liked the wide range of topics covered. I enjoyed the easy-to-read style. Especially helpful are the end-of-chapter summaries, which don’t just sum up the argument, but challenge us to action.

After all, this is a book about choice. It isn’t a detached objective study of a cerebral concept. It’s a call to make choices, truly Christian choices, relevant to our age and faithful to Christ. And that’s got to be good.