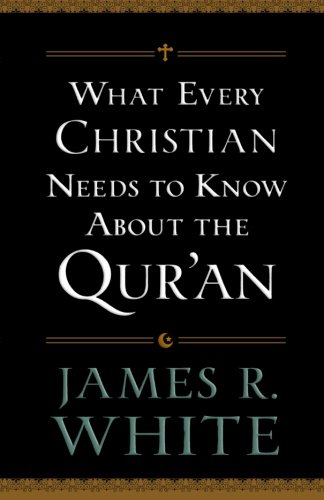 What Every Christian Needs to Know About the Qur’an

Christians and Muslims are much too ignorant about each other’s sacred texts, and Reformed apologist James White aims to remedy the situation. Having debated no less than 25 Muslims over the past two decades (see http://www.aomin.org/aoblog/index.php/about/ [accessed September 30, 2013]), White has compiled his research into a book on how the Qur’an informs the most crucial issues at the heart of Christian-Muslim dialogue. His primary purpose is to equip Christians to engage in fruitful interfaith conversations with Muslim neighbors, “so that we who are commanded to bring the message of the gospel to all can obey our Lord’s mandate with reference to the Muslim people” (p. 14). White also addresses a secondary audience of Muslim readers, who may read “to know how a Christian apologist, theologian, and minister ‘hears’ your sacred text and religious beliefs” (p. 14).

Summary. The first three chapters set the stage, beginning with the life of Muhammad (ch. 1), which White says provides the indispensable context and starting point for understanding the Qur’an (pp. 19–20). After a brief orientation to some basic features of the Qur’anic text (ch. 2), White launches into the Islamic confession of the oneness of God. including similarities and differences with Christian monotheism (ch. 3).

Chapters 4–7 form the heart of the book, addressing four Qur’anic themes that challenge core aspects of the biblical gospel. First is the Qur’anic denial of the Trinity, which White argues misunderstands the orthodox doctrine (ch. 4). Next is the Qur’anic portrayal of Jesus, with an accompanying contrast with the traditional Islamic belief in the intercession of Muhammad (ch. 5). Moving from the person of Christ to the work of Christ, White next examines how Muslims use the Qur’an to defy history by denying that Jesus died on the cross (ch. 6). White next moves from Christology to soteriology, examining the nature of “salvation” in the Qur’an, its teaching on the final judgment, predestination, and how divine mercy/forgiveness functions in the Qur’an as opposed to the gospel (ch. 7).

The final four chapters are devoted to foundational issues related to the reliability of the sacred texts of Christianity and Islam, respectively. White first tackles the Islamic claim that the Bible has been corrupted, showing how the Qur’an does not justify the allegation, and even undermines it at points (ch. 8). Next White focuses on the claim that the Bible speaks about Muhammad, exegeting the various biblical texts often cited by Muslims as foretelling his coming (ch. 9). White then turns the tables and applies a critical eye to the reliability of the Qur’an, with a chapter on problematic parallel passages both within and outside the Qur’an (ch. 10) and a chapter on the messy transmission of the Qur’anic text (ch. 11).

Evaluation. This work is thorough and highly informative, straddling the line between an introduction and a reference text. White does not shy away from lengthy block quotes (there are many) and key Arabic terms (with a helpful glossary at the end), and he cites often from the hadith, traditional Islamic commentaries, and even medieval Christian apologist al-Kindi. It would have been ever better had White interacted more with contemporary Qur’anic scholarship, which could have enhanced and nuanced his analysis of the Qur’an; one notable exception is his interaction in ch. 8 with Gordon Nickel’s work on the Muslim charge that the Bible has been corrupted. (For a sampling of contemporary Qur’anic scholarship, see Michael Cook, The Koran: A Very Short Introduction [Oxford: Oxford University Press, 2000]; Fazlur Rahman, Major Themes of the Qur’an [2nd ed.; Chicago: University of Chicago Press, 2009]; Hanna Kassis, A Concordance of the Qur’an [Berkeley: University of California Press, 1985]; and Geoffrey Parrinder, Jesus in the Qur’an [Oxford: Oneworld, 1995].)

As expected, there is plenty of solid apologetic material on the key Islamic challenges to the gospel. White equips readers to not only defend Christianity against Islamic arguments, but to turn each defense of the gospel into an offense that challenges the veracity of the Qur’an. At times, White is quick to jump into apologetic mode before spending adequate time helping readers to first grasp what the Qur’an is actually saying on its own terms; however, for the most part, White provides a fair and accurate assessment from a Christian viewpoint.

There are a few exceptions. For instance, White gives too much credence to the life of Muhammad as the historical context for Qur’anic interpretation (pp. 19–20, 47), even endorsing the official Islamic “chronology” of the suras as “perhaps the best possibility for reading [the Qur’an] in the fairest and most accurate way” (p. 52). This is puzzling since the earliest sources for Muhammad’s life come from an Islamic biography written 130–200 years after the fact (which White acknowledges on p. 20), which neither historians nor Christians have to accept as historically or theologically binding. Muhammad purportedly died in 632, while the earliest biography of Muhammad was written by Ibn Ishaq—who died in 767—and edited by Ibn Hisham—who died in 833 (see Andrew Rippin, Muslims: Their Religious Beliefs and Practices [3d ed.; London: Routledge, 2005], 45, 48).

Additionally, the material on Jesus in the Qur’an left something to be desired. The chapter devoted to the topic lacks the clear focus and solid analysis of other chapters and would have been better had it been more selective rather than surveying every text naming Jesus. The issue of the Qur’anic rejection of Jesus’ divine sonship was much too brief, providing readers only three paragraphs of commentary to this major obstacle in Christian-Muslim dialogue (pp. 82–84), in which White regrettably continues the misunderstanding that the Qur’an always conceives of divine sonship in terms of God procreating with a female companion (p. 83). While this may be a predominant theme of later (and contemporary) Muslim polemicists, the Qur’an itself is much more ambiguous and multifaceted in its rejection of divine sonship. Of the seventeen passages in the Qur’an that reject the idea that God can or does have a son (walad/ibn), only two of them explicitly mention the idea of a female companion or wife (6:101, 72:3), while the more important/recurring reason for rejecting the notion is its threat to the absolute sovereignty and oneness (tawhid) of God (e.g., 2:116–17; 4:171; 6:101; 9:30–31; 19:35–36; 43:81–82, etc.).

Conclusion. On the whole, however, this work is immensely beneficial in equipping Christians to be informed on how the Qur’an is used to resist the gospel and how Christians might respond in a way that defends Christ and challenges the Islamic worldview. There is more to Christian-Muslim dialogue than apologetics, and thus this work should be supplemented with others that educate on the values and practices of Islam and how to winsomely engage Muslims in friendship (e.g., Phil Parshall’s The Cross and the Crescent: Understanding the Muslim Heart and Mind [Downers Grove: IVP, 2000]; Keith Swartley’s Encountering the World of Islam [Downers Grove: Caleb Project, 2005]; Thabiti Anywabile’s The Gospel for Muslims [Chicago: Moody, 2010]; and Mateen Elass’s Understanding the Koran: A Quick Christian Guide [Grand Rapids: Zondervan, 2004]). Still, this book meets a huge need in the church at large and deserves a place on the bookshelf of pastors and witnessing Christians who seek to see Christ exalted among all peoples—including Muslims.