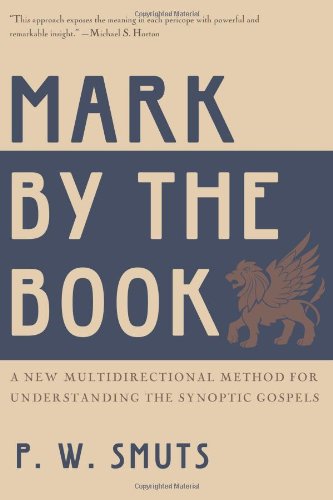 Mark by the Book

Peter W. Smuts’s Mark by the Book is a valuable addition to the fields of Markan studies and hermeneutics. It succeeds where Rhoads and Michie’s Mark as Story lacks in offering a unified biblical theology as part of Markan analysis. It provides accessibility and pastoral sensitivity for the lay reader that is wanting in intermediate exegetical works and analyses of the evangelist’s theological artistry.

Smuts seeks to address three challenges facing any reader of the Synoptic Gospels: (1) how Jesus fulfills the OT in the Gospels, (2) the relationship between the various Gospels—whether to emphasis harmonization or distinctions, and (3) the application of the teaching of the Gospels to the Christian. Smuts desires to avoid the little emphasis placed on the distinctives of each evangelist, as is common in works on general and specific hermeneutics.

The author prescribes four types of readings necessary to understand the Synoptics: (1) a downward reading interprets the text in light of what precedes and follows it; (2) a sideways reading makes comparison to parallel accounts; (3) a backward reading factors in the OT quotations, references, and allusions; and (4) a forward reading looks at the themes a particular passage emphasizes, traces their development in the remainder of the NT, and through these themes applies the passage to the believer. The intention is not to write a commentary; the work examines selective passages.

In the opening chapters of his interpretive method, one discerns the author’s emphasis on the centrality of the person and work of Christ in his approach to the Synoptics. Smuts views Mark as establishing the Deity of Christ and a messianic expectation in Mark 1:1–8 rather than a simple humanity. This is a strand that he sees running throughout Mark as an explanation of the later “messianic confusion” in the Gospel account (p. 11). The remainder of the work is an overview of Mark and how one should examine a Synoptic account.

The downward reading reflects common exegesis of a pericope within its narrowest context. The author demonstrates that a good reading of a Gospel’s text recognizes that literary features of a passage are signposts pointing toward meaning. The non-academic reader will gain insight into Mark’s sandwiching technique, themes of authority and the kingdom of God, and “doctrinal links” between passages on items like justification by faith in Mark and Paul.

In backwards readings, Smuts cautions the reader against seeing an analysis of the OT relationship to a passage as exhaustive. He manifests this third of his four reading elements as a Biblical Theology-reading of a passage in the Gospels, developing the “new exodus” and other typological themes for the lay reader.

In the sideways reading, the author draws upon nuances of the parallel accounts for the sake of rightly reading what each author emphasizes in his text. His method works diligently to prevent an over-reading of the parallels into any one Markan passage.

On the forward reading, Smuts suggests that the reader “ask how developments in the subsequent New Testament-era canonical writings may qualify or modify Jesus’ teaching for the churchgoer” (p. xx). The forward reading is more of a canonical reading than the backward component.

The goal of Smuts’ technique in an account is not a singular meaning. Although he speaks of the author’s intention, he will “pursue a number of motifs” in passages (p. 78). Yet the writer provides great theory and examples on how to read the Gospel text for main emphases. His four strategies work in tandem to follow the same theme or themes in a passage rather than offer readings that distinguish textual, Christological, social, and devotional as separate or disparate.

On particular passages, the theory of application in the forward readings is not clear or consistent. For example, Smuts’s application of the healing of the paralytic in Mark 2:1–12 “should also motivate Christians to prioritize forgiveness in their various relationships” (p. 29). This, however, does not derive from exegesis of the passage, but from systematics. Of related note, the author does not spend time explaining how one legitimately discerns what he suggests is implied by a text.

Other criticisms are few. One is to ask to what degree the Fourth Gospel should be included in this hermeneutic, even as scholars debate the degree to which any of the Synoptics influenced John—if at all. Smuts recognizes John’s parallels in sideways readings of the accounts of the baptizer, the feeding of the 5000, and Peter’s denial, but will not permit John to “detain” the exposition of the crucifixion episode (p. 210).

Smuts does not discuss the influence of intertestamental and first century literary milieus on our reading of the Synoptics. Also, this reviewer would encourage an additional chapter offering an exposition of Mark 16:1–8 separate from the application of Smut’s hermeneutic to the problem of the ending of Mark.

Nevertheless it is important to note that Smut’s reading of the Synoptic Gospels emphasizes the gospel: the death and resurrection of Jesus is primary in this work and the author’s understanding of Mark’s account. This is the best thing about Mark by the Book: it is about the one story of Scripture. All would do well to learn to read Mark in this manner. I hope that Smuts and others produce introductions akin to this one for the other three Gospel accounts.