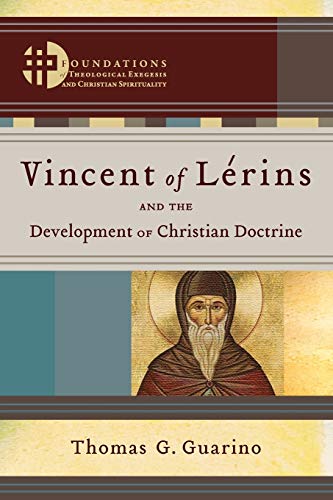 Vincent of Lerins and the Development of Christian Doctrine

If readers of Themelios have earlier encountered the quotable “canon” (“we hold that faith which has been believed everywhere, always, and by all”) or name of Vincent of Lerins (d. 450), they are likely to have done so in literature composed by former evangelical Protestants setting out the reasons for which they have embraced Roman Catholicism. For such latter-day apologists, Vincent’s “canon” has been reckoned to supply the criterion by which Protestantism’s innovations may be identified for what they are: substantive departures from the faith as “once delivered.”

Yet it would be preferable for modern readers to encounter Vincent and his “canon” in less over-heated sources, such as in this small but fascinating work by Thomas Guarino, professor of theology at Seton Hall University. Guarino, a Roman Catholic writer, provides a less angular assessment of Vincent, his times, and his longer-term impact. One finds here unlooked-for surprises, as well as explorations of how Vincent’s “canon” has “traveled” across the centuries.

As for surprises, consider that Vincent, an accomplished Latin monk-theologian, while the contemporary of Augustine, was not (as has so often been suggested) the theological critic of that North African bishop and theologian. The latter theory is one passed down to us by the seventeenth century Protestant Dutch patristic scholar, Gerardus Vossius in 1618 (p. xxiv). Vincent’s dictum about theological constancy was not, on Guarini’s reading, intended as a curb against perceived excesses in Augustine’s understanding of predestination and grace (excesses which Vincent may actually have reckoned to exist), but a curb against the recurrence of serious heresies such as Arianism. Vincent aimed to show that it is the church’s stable received interpretation of its supreme standard, Holy Scripture, which provides a bulwark against errant appeals to Scripture by the heretical.

If that is one misconception needing to be laid aside, another is that Catholic theology has invariably endorsed Vincent’s stance on the question of doctrinal development. Within the last century for instance, some Roman Catholic thinkers have faulted Vincent’s stance on the unchangeableness of Christian belief as “untenable” and as tending to “mummify doctrine” (xii).

Again, there is the misconception that it is chiefly Catholic apologists who have sought to use Vincent as a hammer against Protestants. While Guarino might have explored this much further in his first chapter, he tantalizingly discloses that during the sixteenth-century Reformation, Protestant writers showed themselves highly conversant with Vincent’s “canon” (drawn from his work, the Commonitorium). Protestants regularly alleged that, by Vincent’s standard, medieval Catholicism stood condemned for its serious doctrinal innovations. Papal supremacy, purgatory, and the theology of the Mass were to be held suspect, precisely because they had not been maintained “always, everywhere, and by all.” Protestant writers continued to make such appeals to the “Vincentian canon” into the nineteenth century as part of their insistence that Protestantism had intentionally reverted to earlier and less-encumbered doctrinal convictions.

Finally, for the many who have been content to draw attention to Vincent as no more than a kind of vigilant guard against doctrinal innovation, Guarino does his readers the great service of highlighting Vincent’s cautious attempts to describe what might constitute legitimate refinement or re-statement of Christian doctrine. Legitimate developments must be clear extensions rather than alterations of what is already believed. There was an attempt at seeing doctrinal refinement as an organic process.

Above, this reviewer alluded to the fact that Protestantism continued to appeal to Vincent’s canon against Roman Catholic doctrinal innovation into the nineteenth century. Guarino’s second major section of the book concerns itself with what curtailed those Protestant appeals. In a word, such appeals were restrained by the appearance of John Henry Newman’s 1846 volume, Essay on the Development of Christian Doctrine. This built upon the minor, but still-present emphasis in Vincent’s work as to what would constitute legitimate extension and refinement of Christian belief. Newman’s own considerable research had driven him to the conclusion that both Roman Catholic and Protestant theologies had expanded considerably beyond the assertions of the early ecumenical creeds. He found in Vincent’s hints as to what might constitute legitimate doctrinal expansion a path forward for adjudicating such developments. Employing it, he was able to defend papal supremacy, Mariolatry, and purgatory as outworkings of earlier Christian convictions.

Yet this helpful section shortchanges the reader, for it does not adequately indicate the intensity of opposition initially offered to Newman’s scheme from within Roman Catholicism (which in 1846 still preferred to uphold the notion that there had been no development of doctrine to speak of) and from within Protestant theology (from whose ranks Newman departed, even as he completed the Essay). Newman’s over-readiness to suppose that the early Church, guided by the Spirit in early contests with heretics, would inevitably be led to sound conclusions in all further questions involved a chain of reasoning that effectively ruled out the possibility of defection. The reviewer knows of no work that highlights the extent of trenchant nineteenth century criticism of Newman’s Essay (indebted as it was to Vincent) better than Peter Toon’s The Development of Doctrine in the Church (Grand Rapids, 1979). In a word, critics faulted Newman for relying so extensively on the idea of organic development, that all possibility of exaggerated or erroneous development was eliminated. Sadly, it is no purpose of Guarino to explore the contested application of Vincent’s idea by Newman to his times.

The weakness just noted may also be said to characterize the third and final section of the book, concerned with the ongoing significance of Vincent and his canon for current ecumenical theology. One might infer that Guarino conceived of his readership as largely Roman Catholic. Yet this volume constitutes a part of a designedly ecumenical series, Foundations for Theological Exegesis and Christian Spirituality, and so it is far from obvious why this extended discussion about the gradual re-appropriation within modern Catholic theology of Vincent’s idea of organic theological development (as mediated by Newman’s Essay) is of significance for a Protestant reader. While Protestant readers can note, with gratitude, the author’s reminder that Vincent was crystal clear on the primary authority of Scripture (p. 93), there is such a determination to avoid a position which might be called “bare Scripture” that one does not find an adequate readiness to allow Scripture to stand in judgment over inherited theological tradition. Modern Roman Catholic theology, while acknowledging, in principal, Scriptural supremacy, has not moved to prune away the long-standing and more recent exaggerated beliefs and practices which fuel Protestant dissent; its failure to do so is adequately explained by Kevin Vanhoozer, who cautions against “the presumption that church tradition and Scripture coincide” (p. 94).

All this being said, we can be grateful to Thomas Guarino chiefly for the opening historical segments of this work. The subsequent segments demonstrate inadequate interest in Protestant interest in and reckoning with Vincent and his “canon.” Yet, the fresh light shed on Vincent, his times, and the actual thrust of his principles of doctrinal development should, by itself, ensure that both Catholic and Protestant writers appeal to his “canon” more responsibly. Let a reading of this work serve as the needed stimulus to many to read Vincent’s Commonitorium (readily accessible in English in the Library of Christian Classics series) and his later disciple John Henry Newman’s Essay on Development.