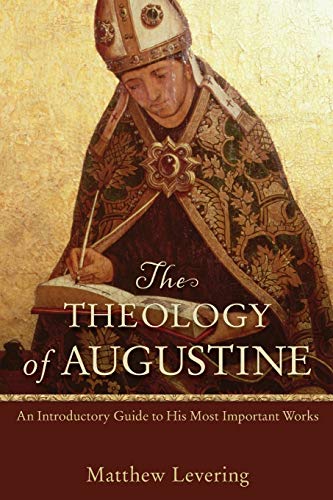 The Theology of Augustine; An Introduction to His Most Important Works

Introductions to Augustine have proliferated in recent years as interest in his theology, and in how he should be read, have intensified from both Protestants and Catholics. Matthew Levering joins this revival with his new book focusing specifically on the theology of Augustine from “his most important works.”

Levering sets up the book well with a brief overview of Augustine’s life and an introduction to the major disputes in which Augustine was involved. Levering is rightly sensitive to the chronology of Augustine’s life when choosing which works to include in his book; though he carefully orders them, not in chronological order, but in a way that best introduces the mature theological thought and priority of Augustine.

The first four chapters seek to lay the groundwork of “Love” from different angles. Levering begins with On Christian Doctrine in order “to give a sense of Augustine’s main preoccupations as an interpreter and preacher of Scripture” (p. xvii). He then moves to Answers to Faustus, a Manichean to highlight Augustine’s “insistence upon the unity of God’s salvific teaching” (p. xvii) in both the OT and NT. Third, Levering attends to Augustine’s Homilies on the First Epistle of John because these homilies “underscore the christological, ecclesial, and eschatological context of Christian love” (p. xviii). The fourth work, On the Predestination of the Saints, highlights Augustine’s teaching that God loves and saves due to His goodness, not ours.

This groundwork of Love provides a proper place from which to consider Augustine’s three best known, and arguably most important works: Confessions, City of God, and On the Trinity. Levering suggests that Confessions considers the individual aspect of coming to know and love God. City of God considers the individual in light of the communal participation in the Triune God and the whole of human history. On the Trinity is an inquiry into the “communion-unity of God the Trinity.” As Levering argues, “All wisdom, all history, and every aspect of our life find their fulfillment in God and his love” (p. xviii).

The greatest strengths of the book are, first, how it “majors on the majors” in Augustine. There are manifold themes in Augustine one could attend to in an introductory text, and the theme of love is a major one that is sure to shine a pure and true light on Augustine. Secondly, a sound birds-eye-view summary of Augustine’s major works is priceless for students of Augustine; Levering’s book is precisely that. He manages to properly explain Augustine’s important works at the macro level, while dealing closely and carefully with the seams and important themes. This alerts readers both to the shape and direction of Augustine’s thought. Thirdly, Levering did his homework, as evidenced by the many footnotes on almost every page. His sources are up to date, and representative of the major voices and movements in current Augustinian research. Levering packs into 200 pages what feels like 500 pages of solid research and scholarship—and for a great price.

Two weaknesses of the work are worth noting. First, as expected for any introduction to Augustine, every topic and work cannot be discussed. Thus, readers should be aware that while Levering’s introduction is very good, it does not (and cannot) cover everything about Augustine. Critics will doubtless point out that this or that book or theme was left out, and rightly so. Nonetheless, Levering is up front about the works he chose to cover, and handles them well. Second, while encouraged by the strength of secondary sources and citations, I was disappointed in the lack of primary source interaction. While Levering does, in my opinion quite faithfully represent Augustine, his work would certainly have been strengthened if he had injected it with a few more quotes per chapter from Augustine’s own words.

Recommended? Yes. Needed? Yes. Levering’s book serves as a good supplement for William Harmless’ recent introduction, for example, by orienting readers to the forest of Augustine’s work and thought before leading them too far into the thick trees of De Trin. or civ. Dei. that so often overwhelm. I would gladly give this book to the interested parishioner, undergraduate, or beginning graduate student.