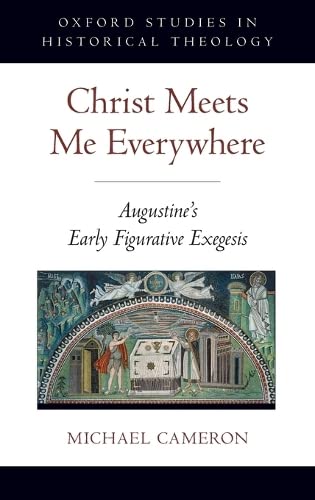 Far too often, evaluations of Augustine’s biblical exegesis limit themselves to certain theological principles, such as the totus Christus, or the formal articulation of his hermeneutical theory in De doctrina christiana. While certainly valuable, analyses of Augustine’s fully developed interpretive practice or hermeneutical theory fail to convey the particular historical developments undergirding his approach. In this book, Michael Cameron seeks to remedy these limits through a close analysis of the early development of Augustine’s figurative method of interpreting the OT; in so doing, as he informs his readers in the introduction, he hopes to move beyond “abstract statements about Scripture” and instead to attempt to “catch his hermeneutic in the act of rising out of his practice” (p. 11).

Cameron divides the book into three chronological periods ranging from 386 to ca. 400. For each of these periods, he provides a title summarizing how its contribution to Augustine’s progressive education on how to read the Bible: Novice: Rhetor, Convert, Seeker of Wisdom (386–391); Journeyman: Priest, Apprentice, Student of Paul (391–396); and Master: Teacher, Defender, Pastor of Souls (396–ca. 400). Amidst the many insights he brings, two themes in Cameron’s treatment deserve special mention: the influence of Augustine’s rhetorical education and the centrality of his developing Christology. It is important to remember that, while Augustine was certainly adept in the world of philosophy, his vocation prior to conversion was a teacher of rhetoric, and he brought his rhetorical sensibilities with him to the task of reading and interpreting the Bible. It was through the language of rhetoric, Cameron argues, that Ambrose made his impact on Augustine. While previous scholars have often emphasized Ambrose’s philosophical influence, underlining his role in inspiring a shift in Augustine away from Manichean materialism, Cameron argues that Ambrose’s principal contribution lay in unveiling the rhetorical coherence and beauty of the scriptural text in terms that the rhetor Augustine was already well familiar with. Whereas Augustine once scorned the crude language and lack of rhetorical sophistication he found in the Christian Scriptures, under Ambrose’s tutelage he came to see that the rhetorical genius of the Bible lay in the suitability of its humble language to its rhetorical end. Furthermore, Cameron also illuminates the historical background to Augustine’s early attempts at figurative exegesis by showing the continuity between Augustine’s methods and various rhetorical strategies outlined in Quintillian and Ciceronian rhetorical handbooks.

Cameron’s second and central theme, as reflected in the title, is the relation between Augustine’s Christology and his figurative interpretation. Augustine had been deeply influenced by Manichean Christology and, later, Platonic philosophy. Cameron argues that the conceptual break from these earlier influences can be found in Augustine’s developing understanding of the incarnation and its soteriological function around the year 390. By understanding the incarnation as “divine Wisdom stooping all the way to earth,” Augustine’s Christology “had crossed a frontier” (p. 117). This provides the paradigm for how Augustine can appreciate the function of the biblical text, so that “the key to understanding Scripture was replicating Christ’s incarnate humility by reading ‘low to the ground,’ so to say, in the humility of faith.” (p. 120). While Cameron has argued this thesis before in published articles, he furthers his previous work by interpreting this incarnational paradigm operative in 390–391 as incomplete and fatally weak due to its almost complete avoidance of the crucifixion.

Chapters five and six narrate Augustine’s encounter with St. Paul, an encounter that Cameron cites as the decisive factor in enabling a more mature Christology and interpretative practice. Through his reading of Romans and Galatians, Augustine came to discover both the overriding importance of Christ as the crucified one and the depth of Christ’s embrace of the human crisis. Whereas Augustine had previously been hesitant to impute sin or curse to Christ, in his commentary on Galatians in 394–395 he came to view the removal of human sin as a direct effect of Christ voluntarily taking up (suscipere) the penalty for human transgression (pp. 153ff). Cameron finds evidence for this shift in the Enarrationes in Psalmos as well. While the first fourteen psalms evince Augustine’s desire to hear the voice of Christ and the Church together, he still feels the need to make distinctions between the voice of divinity and the voice of humanity. However, in Augustine’s treatment of Psalms 15–32, which occurs concomitant with his reading of St. Paul, we find a change as Augustine not only identifies the ego in the psalm with Christ, but specifically with Christ speaking from the cross.

This book achieves its aims and proves a delightful read along the way. Readers will appreciate the clear organization of chapters and helpful use of headings and subheadings, as well as the illustrative charts Cameron provides in his comparison of Augustine’s practice with ancient rhetorical handbooks. Through admirable attention to historical detail and the influences in Augustine’s intellectual development, Cameron will undoubtedly aid his readers in forming a subtler and more historically informed appreciation for Augustine’s figural method. Perhaps most importantly, Cameron excels in precisely what he sets out to do: catching Augustine’s hermeneutic as it rises out of his practice. While some may perceive Augustine’s exegetical practice as the ineluctable conclusion to a formally developed semantic theory or the uncritical reception of ancient allegorical technique, Cameron effectively demonstrates that the origin of this practice was more complex and far more theologically grounded. Augustine learned to read the Bible as he sought to understand Christianity against his latent Manicheism, applied the skills of his rhetorical training, strove to pass on his understanding of the Scriptures to those under his pastoral care, and wrestled with the letters of the apostle Paul. While the book’s intended audience is primarily students and scholars of the history and theology of late antique Christianity, it is highly recommended for any who, like the venerable bishop, seek to discover the face of Christ in the pages of the biblical text.