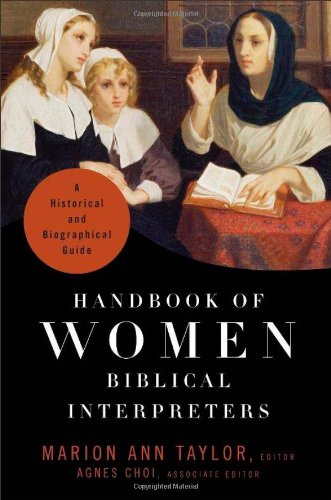 Handbook of Women Biblical Interpreters: A Historical and Biographical Guide

Several years ago Marion Ann Taylor, professor of Old Testament at Wycliffe College, University of Toronto, was teaching a course on the history of OT scholarship when a student sought to write a paper on a woman interpreter of the Bible. This set Taylor to wondering about women Bible interpreters and turned her own studies in a new direction. Though women were not included in the standard texts on the history of biblical interpretation, surely women had been reading and interpreting Scriptures throughout Christian history. Taylor began a search for female interpreters of Scripture. Her research at first focused on the interpretive work of nineteenth-century women. A fruit of that study was Let Her Speak for Herself: Nineteenth Century Women Writing on Women in Genesis, a collection of interpretations of Genesis by nineteenth century women co-edited with Heather Weir and published by Baylor University Press.

Taylor has now edited, along with associate editor Agnes Choi, the Handbook of Women Biblical Interpreters, a most valuable reference guide to Christian women and their interaction with Scripture throughout the Christian era. Articles on one hundred and eighty women, from Proba in the fourth century through Achtemeier at the end of the twentieth century, are alphabetically arranged for easy reference. Each entry begins with a short biography, providing context for the woman’s contribution. An analysis of the woman’s work follows, focusing on her biblical hermeneutics, key themes in her works, and especially on how her womanhood might have influenced her biblical interpretations. Many articles note how the subject dealt with specific biblical texts or themes relating to women and women’s issues. Each entry concludes with comments on the woman’s influence or legacy as well as a helpful bibliography of both primary and secondary sources. Many of the 125 scholars who contributed to the Handbook were previously Taylor’s students at Wycliffe College, University of Toronto; but Taylor also sought out scholars in the Americas, England, and Europe who had expertise in a particular woman’s writings.

Few of the women biblical interpreters wrote biblical commentaries, though women were writing commentaries by the nineteenth century. The genres of the women’s writings include travel journals, poetry, plays, dialogues, letters, addresses, advice manuals, devotional pieces, and academic works. Some are written specifically for other women, while others are for a mixed audience. The Handbook does not include biblical interpreters in art or music. The vocations of the women interpreters include everything from queens to wives, mothers, teachers, social workers, archaeologists, health givers, mystics, preachers, and more. The interest they have in common is that each one in some way was reading and interpreting the Bible.

Though the Handbook is comprehensive in spanning the centuries, there are understandably more abundant sources available to study women’s biblical writings from the eighteenth through the twentieth centuries. Two additional women who could be included from these later centuries are Mary Rowlandson, whose captivity narrative The Sovereignty and Goodness of God is replete with Scriptural reflections, and Mary Lyons, the founder of Mt. Holyoke College who deeply imbibed her thinking from the Scriptures and imparted them to the ladies at the college. The third century martyr Perpetua, whose writings are the earliest we have by a Christian woman, could also well have been included in the Handbook.

Though most of the women included in the Handbook are Christians from varied backgrounds and traditions, a few, are included who attack Scripture as a tool to oppress women; examples include Annie Besant and Elizabeth C. Stanton. A few women, such as Margaret Beaufort and Claire of Assisi, certainly were involved in Christian work, but we cannot clearly discern at this date their biblical hermeneutic.

Some analyses of the women’s works address more of the women’s theology or stance on women’s issues than biblical interpretation. Yet, most of the entries provide insights into the interpretive perspective of the Bible the various women held. The entry on Queen Elizabeth I of England, for example, notes at least twenty specific Bible passages referenced by Elizabeth and analyzes how she personally applied these.

Several features at the end of the Handbook enhance its usefulness as a textbook or handy reference. An alphabetical List of Entries includes the dates for each woman. A Chronological List of Women Biblical Interpreters is most useful in studying the women of a particular era. Such a chronological list also shows how the culture of an era, such as the Middle Ages, influenced the method of biblical interpretation. A search of particular topics women addressed in their works is made easy with the comprehensive Subject Index. The Scripture Index allows one to find works in which women dealt with particular passages of Scripture, as well as to notice which passages of Scripture women most frequently discussed.

The Handbook is a beginning in the restoration of a missing voice to the history of biblical interpretation. In this volume, many women and their writings on the biblical text have been brought to light that were previously forgotten, hidden, or lost. Since most of the women were not members of the clergy or the academy, the writings of these women also open for us a window into a lay or popular understanding of biblical interpretation. These women provide examples of an individual’s biblical understanding and the influence of the Scripture on her own life and thought. Though it includes feminists in its entries, the Handbook does not espouse a feminist agenda, but is a useful tool and resource for both men and women in the study of history, theology, and biblical hermeneutics.